Clay Moore is one smart — and lucky — young fellow. The 13-year-old resident of Parrish, Florida, was kidnapped at gunpoint by an illegal alien on Friday in an attempted kidnap-for-ransom plot. Clay cleverly used a safety pin to escape being duct-taped to a tree in a remote wooded area 20 miles from the abduction, and then found a farmer with a cell phone which he used to call for help.

On the day he was kidnapped, Clay Moore's parents made the 13-year-old use a safety pin to mend his school uniform because he was to blame for tearing it.

That safety pin became key to Clay's escape from the kidnapper, who snatched him at gunpoint from a school bus stop last Friday and left him in an East Manatee woods taped up and gagged. [Clay Moore's incredible tale of escape from an armed kidnapper, Sarasota Herald Tribune 2/27/07]

Below: Clay Moore appeared with his family at a press conference. 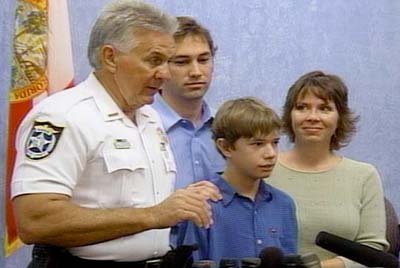 This case is a very concerning example of Mexicans bringing their culture of crime, particularly kidnapping, to this country.

Kidnapping for ransom is nearly non-existent in the whole of the USA. In Tijuana, there were close to 100 reported incidents of it last year. [Crime wears on Tijuana, San Diego, USA Today 2/05/07]

Suspect Vicente Beltran-Moreno, who earlier worked as an agricultural picker nearby, remains at large, and may have already escaped to Mexico. Naturally, the local illegal alien community fears a "backlash."

Meanwhile, parents have begun accompanying their children to bus stops.