As noted several times in these parts, Mexican kidnapping diversity is spreading rapidly into American communities along with the rather limited benefits of salsa and enchiladas. Just as predicted, the increased incidence of kidnapping in Tijuana has moved north.

The pre-trial hearing currently unfolding in San Diego is revealing fascinating details of Mexican crime culture. Abductee and Mexican businessman Eduardo Gonzalez Tostado (shown) testified that he was held captive for eight days after being lured to a Chula Vista house with the hope of a sexual liaison. Bad choice, bub. 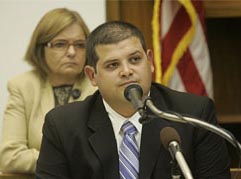 Amusingly, his pregnant wife hung up the phone when he called with the ransom demands, figuring it was tom foolery to cover up his staying out all night with another woman. The guy evidently has a history.

But the headline in Monday's Orange County Register was more serious — Victim: Kidnappers unafraid to commit Mexican-style crime in U.S.

Eduardo Gonzalez Tostado, 32, haltingly recounted his captors' threats and demands for money in the first hours after a woman lured him to a home in a quiet cul-de-sac the night of June 8 with the promise of sex. Instead, he was jumped, beaten and shot with a stun gun by at least four men who blindfolded and bound him.

Gonzalez was finally rescued by an FBI SWAT team who tracked a suitcase full of money with a homing device to the hideout. Of the six accused perps, there are four Mexican citizens, one Cuban and one U.S. citizen. They could be sentenced to life in prison.