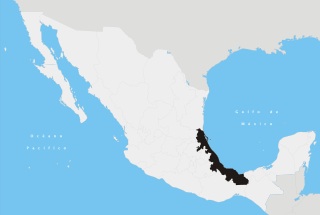 Here’s another marker of the worsening failed-state syndrome next door: Mexico City admits that government authority has disappeared from the Gulf state of Veracruz, leaving it to the ultra-violent Zeta crime syndicate.

As the graphic indicates, Veracruz is not a small piece of land. At more than 30,000 square miles, it accounts for 3.7 percent of Mexico’s territory. Its coastline of just over 428 miles makes it desirable real estate, for both commerce and crime.

Presidente Calderon is nearing the end of his term, and his war against the drug cartels has not been successful. The cartels have been demonstrating their growing power in various ways; one example was the Zetas dumping 35 bodies on a city freeway during rush hour last month in downtown Boca del Rio, Veracruz.

Presidente Calderon tries to spin the chaos as being the responsibility of previous government officials (perhaps taking a clue from his amigo in Washington). But Calderon has been in charge for five years, and he owns the issue of combating drug cartels. He suggests the lawlessness is a local problem, although he has not been shy about sending the army into other areas to push cartels back.

In Mexico today, surrender is an option.

With that fact in mind, Washington should take the necessary steps to keep invasive Mexicans OUT.

Mexican President Felipe Calderon said Friday that the violence-plagued Gulf coast state of Veracruz had been left in the hands of the brutal Zetas drug cartel.

Calderon has complained in the past that previous governments allowed Mexico’s cartel problems to grow and didn’t do enough to stop them. But he hasn’t previously suggested a state was largely turned over to traffickers.

In comments to a meeting of crime victims’ groups in Mexico City, Calderon did not say specifically who he thought was responsible.

“I believe Veracruz was left in the hands of the Zetas, I don’t know if it was involuntary, probably, I hope so,” said Calderon, who added that “if we hadn’t taken on organized crime, they would have taken over the country, I assure you.”

There have been persistent accusations against former Veracruz Gov. Fidel Herrera Beltran, who left office in December 2010. While his term was relatively calm in terms of violence, adversaries accuse him of allowing the Zetas to operate freely in the state, which is lucrative route for migrant and drug traffickers.

Herrera Beltran has denied those accusations, claiming they are politically motivated.

Since mid-2011, Veracruz has been hit by dozens of murders and shootouts, including a grenade attack on a boulevard that killed one Mexican tourist. The state has been the scene of bloody turf battles between the Zetas and gunmen apparently linked to the Sinaloa cartel, and in recent weeks there have been two mass killings in which 67 bodies were found.

In recent weeks, Miguel Angel Yunes — who made an unsuccessful run for governor in 2010 elections, which he lost to the candidate from Herrera Beltran’s Institutional Revolutionary Party — told local media that the former governor had “handed over the police and police command to these criminal groups, and everyone in Veracruz knows it.”

In late July, masked gunmen claiming to be from a group allied with the Sinaloa cartel posted a video on the internet, in which they accused the former governor of protecting their rivals, the Zetas, and called Herrera Beltran “Zeta Number One.”

In an interview with MVS radio earlier this month, Herrera Beltran “energetically rejected” the allegations, and accused Yunes of being behind the anonymous video, and attributed the accusations to “perversity, hatred, rancor.”

Herrera Beltran did not immediately respond to an email request for comment.

In Sinaloa state, marines killed five alleged drug traffickers in a clash in the Pacific coast city of Mazatlan, the navy said in a Friday statement.

A suspect who was detained after a gunbattle with police led authorities to a safehouse where the gunmen had hunkered down Thursday, it said.

More than 35,000 people have been killed in drug war-related violence around Mexico since President Felipe Calderon launched his offensive in late 2006, according to government figures. Some groups say more than 40,000 have died.

Also Friday, police found the bodies of three men who had been tortured and shot to death in the city of Apatzingan in Michoacan state.

Two of the men were placed on chairs and the other on the ground of a traffic circle at the city’s entrance. Police also found a threatening message signed by the cult-like Knights Templar drug cartel, Michoacan prosecutors said in a statement.

In the resort city of Acapulco, seven men were killed in three separate attacks Friday, police said.
A father and son and two other men were shot to death inside an auto repair shop, the Guerrero state Public Safety Department said in a statement.

Two other men were killed in a residential area and another one was found inside a hotel, but the cause of death it those cases has not been determined, the department said.