A big story in San Antonio is that a US-born Mexican cartel hit-kid has been deported from a Mexico prison to live in that city. Arrested when he was 14, little Edgar Jimenez Lugo is now 17 and has served his paltry three-year sentence in permissive Mexico for murdering at least four.

What could possibly go wrong? After all, a 2010 headline observed, “Mexico: U.S. teen specialized in beheadings.”

Legally, Lugo has paid his debt to (Mexican) society, but what about the safety of American citizens in Texas? Will his address and current mug shot be available for concerned citizens?

News stories make it sound like the authorities are stuck with a challenging program of rehabilitation. Apparently he will go to a residential care facility and has family in San Antonio. But what are the chances of rehabilitation being successful beyond slim to none? Job skills: throat slitting and drug dealing.

Below, slasher kid Edgar Jimenez Lugo was arrested in Cuernavaca in 2010. 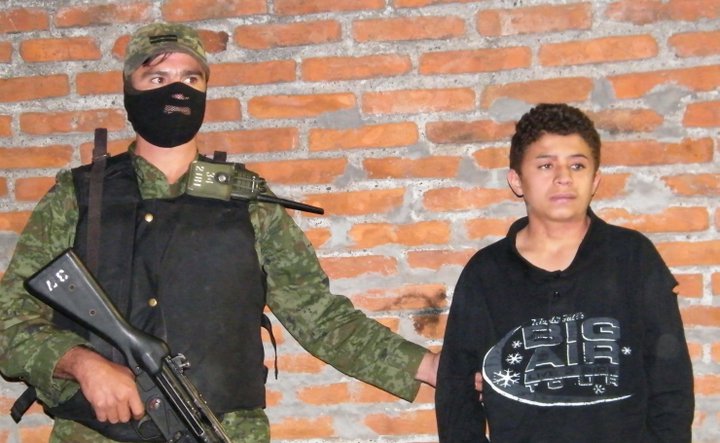 The good news for Lugo is that he will likely feel right at home in San Antonio. The Census reports that the city is 63.2 percent Hispanic as of 2010 and 46.1 percent speak a language other than English at home — hmm, what language might that be?

As usual, the Daily Mail has the gritty, non-PC details that inquiring minds want to know:

Teenage drug cartel hit man, who BEHEADED four victims, on his way home to US after serving 3 years in jail, Daily Mail, November 26, 2013

A 17-year-old U.S. citizen and known hit man for a Mexican drug cartel has finished his three-year, juvenile-offender term for homicide, kidnapping, drug and weapons possession and returned to the United States.

The interior secretary of southern Morelos state, Jorge Messeguer, said Edgar Jimenez Lugo had been released today – though he added it wasn’t clear if the teen had been rehabilitated.

‘Being able to say whether he’s been rehabilitated, that would be risky. I wouldn’t really dare say that, because obviously the crimes he committed were so severe,’ Messeguer said.

He said Jimenez flew to San Antonio, Texas on Tuesday where he does not face any charges under U.S. law and is considered a free man.

The U.S. Embassy said it would not publicly discuss the case due to privacy considerations.

The teenager is believed to have family in Texas and apparently will go to a residential support facility there.

The embassy said in a statement that it was ‘closely coordinating with our Mexican counterparts and appropriate authorities in the United States’ regarding the release.

In 2011, at age 14, Jimenez confessed to killing four young men whose beheaded bodies were found suspended from a bridge.

He was born in San Diego, California, but was raised in Mexico by his grandmother.

Authorities quoted Jimenez as saying he had been forcibly recruited by drug traffickers when he was 11 and confessing to working for the South Pacific drug cartel, led by reputed drug lord Hector Beltran Leyva.

Jimenez was trying to return to the United States when he was caught in 2010.

He and a sister were arrested in Morelos, south of Mexico City, as they tried to board a plane to Tijuana, where they planned to cross the border and reunite with their mother in San Diego.

When he was handed over to federal prosecutors, the boy calmly said in front of cameras that he participated in four killings while drugged and under threat. The bodies were found in the tourist city of Cuernavaca, which is in Morelos.

Jimenez served his three-year sentence, the maximum for juveniles, at a juvenile detention center in Morelos.

The states was formerly controlled by the Beltran Leyva gang, which broke up after alleged leader Arturo Beltran Leyva died in a shootout with Mexican marines in 2009.

Edgar was 14 in August 2010 when he killed the young men — a student, a cook at a university, a gas station attendant and a small-business owner.

Lugo, nicknamed ‘El Ponchis,’ received a three-year term, which was the maximum allowed under law, after he admitted to beheading the four victims in central Mexico.

At the time of his arrest, he told reporters: ‘I participated in four executions, but I did it drugged and under threat that if I didn’t, they would kill me.’

Lugo became notorious due to his age and online videos that discussed him. There was also a YouTube video of him beating a man with a two-by-four while the man was hanging from the ceiling.

Edgar was convicted in juvenile court in July 2011 of homicide and organized crime charges, and sentenced to three years in custody, the maximum allowed.

Once freed, Edgar will face no clear legal obstacles to crossing into the United States.

‘He can come live here when he turns 18 (in May) without any supervision. The U.S. can’t do anything, and Mexico cannot do anything,’ she said. ‘He wasn’t charged with conspiracy in the U.S.’ said Guadalupe Valencia, a San Diego criminal defense attorney.

Lugo was arrested at a Mexican airport when he and a sister were trying to flee authorities and fly to their mother in San Diego, the outlet reported.

Yolanda Lugo Jimenez was then arrested a few days later on immigration violations and deported in April, the outlet reported noting her whereabouts are now unclear.

Because of his criminal background, his family in Mexico fears his return could also put them at risk.

A book bearing Edgar’s image on the cover was released last month. It included his former street address.