Word is getting around that Mexico is becoming more middle class (with 39 percent of Mexicans now so estimated), despite the grifter nation’s attempts to keep that information secret from the United States. Mexican elites would prefer that clueless Washington think of the crackhouse next door as poor relations, needing a continuing handout of free stuff and the nearly open border now being negotiated. There are  seven million illegal alien Mexicans residing here who would benefit from the amnesty and those still in Mexico could look forward to the increased flow included in the “reform” scam. 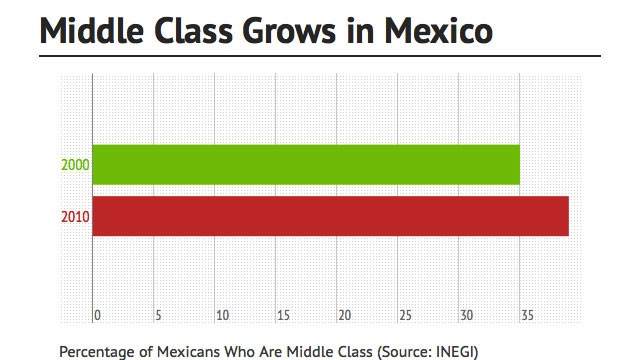 One example of severe stupid: in 2011, the US gave wealthy Mexico $411 million in foreign aid. Meanwhile, Mexico currently ranks #14 for GDP among nations — it’s rich! Forbes’ March 2013 list of billionaires counted 11 from Mexico.

Even with economic improvements however, Mexican pols are addicted to the cushion of easy-money remittances from their expats ($24 billion in 2012).

I’ve been writing since 2003 that Mexico is a very wealthy country and didn’t need transnational welfare from Uncle Sucker. The country has had a big population living in poverty but also has the financial resources to improve the well being of its citizens by investing in education and infrastructure.

Schools are still sub-par, according to a McClatchy investigation from June 2012. The current report at least shows the movement is in the right direction, albeit slowly. 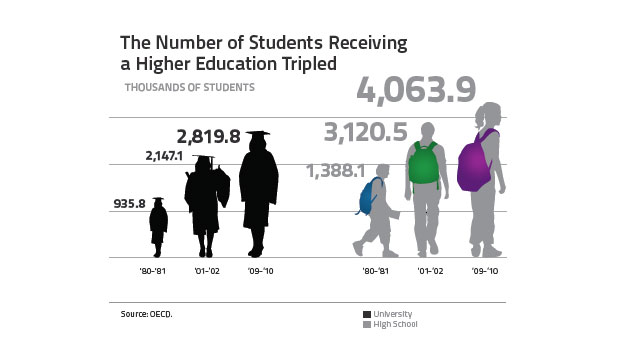 Of course, it’s tough sledding to improve civil society when a persistent war among drug cartels is shooting up the place. Law and order would be a big help. Business is booming in places like the Yucatan where cartels aren’t littering the resorts with messy beheadings.

One of the recent ruses of the open-borders gang is to demand America admit “narco refugees” of drug violence, when the claimers of victimhood could more easily relocate to somewhere peaceful in Mexico.

Anyway, Mexico seems to be progressing economically in spite of its monumental corruption and backwardness. Good for them!

Many Americans fervently hope for Mexico’s great success, particularly to the extent that they will self-deport, er return to their beloved homeland and remain there happily ever after.

A new study on Mexico helps to explain the recent fall in Mexican immigration to the U.S. It suggests that Mexico is slowly becoming a “middle class country.”

So yes, the growth in the Mexican middle class is miniscule compared to what is going on in China, where the middle class grew sixfold over the past ten years. But growth in Mexico’s middle class is still large enough to discourage some illegal immigration to the United States, as a recent Washington Post article suggests.

It is also good news for American companies that are looking for new markets for their consumer goods. Most importantly, middle class people are also less likely than “lower class” people to fall into poverty if they lose their job or if an income provider in their family dies. INEGI says that middle class people generally have intangible assets like a college education, or physical assets like a home, which protect them to some extent from economic shocks.

The INEGI study was based on a survey of more than 30,000 homes, which was conducted in 2010. The agency said that in order to determine which social class people in Mexico belonged to, it analyzed 17 variables that included how much people spent on food, whether they had credit cards, how much they spent on internet access and how many rooms each household had.

This analysis is not alone in pointing out a social uptick for Mexico. There are several other indicators that suggest that over the past thirty years, Mexicans have increasingly acquired a middle class “lifestyle.” Check out the data below. It was compiled by economists Luis de la Calle, and Luis Rubio in graph form for a book they published last year called “Mexico, A Middle Class Society.”