Mexico Battle Lines — There and Here 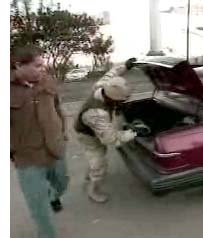 This photo looks like something straight from Baghdad, but it's actually just across the border in Tijuana. The Mexican government has stationed military checkpoints on the edge of town so the army can check for serious weapons (RPGs are popular) and other signs of criminal activity. As well it should, since more than 300 people were murdered last year in the city. Many Mexican police are on the payroll of the drug cartels, so el Presidente Calderon's only hope of rescuing his country from total crime anarchy has been to send in the troops to various hot spots.

Not only is tourism down, but kidnapping for ransom is up, and many well heeled Tjuanans are "moving" north to San Diego. At least the worsening crime wave is swell news for the armor-plating shops.

SAUL GONZALEZ: While most Mexicans see corruption, crime, and the country's general climate of fear as crises, Mexico's growing personal security industry see them as opportunities.

At Tijuana's Blindado Seguro-Total Shield Company, customers come to have their cars and trucks armored with enough steel-plating and other protective material to drive through a war zone. The cost of the automotive makeover ranges from $30,000 to $80,000. The company's president is Carlos Guerrero.

CARLOS GUERRERO, President, Total Shield (through translator): This is a high-end job, a level five that can protect you from automatic weapons. [Mexican President Orders Crackdown on Crime, PBS 2/22/07 - includes video version]

In other Mexico meltdown news, "Federal police to permanently guard Acapulco hotels" because of the cartel violence in the once glamourous vaction spot. In Nuevo Laredo drug crime is destroying the honest businesses of the community: "In the past year, 700 small- and medium-size businesses shut down... and about 40 of the city's top business leaders have set up shop across the border."

As I write this, television news has been reporting the kidnapping of 13-year-old Clay Moore in Florida by Mexican illegal alien Vicente Beltran-Moreno. According to Manatee County Sheriff Charlie Wells, "This was an absolute kidnapping for ransom." Fortunately, Clay was resouceful enough to get loose from the tree to which the Mexican had tied him and call the police.

The details of the crime are disturbing indeed: Beltran-Moreno forced the boy at gunpoint into a pickup truck at a school bus stop Friday morning as other students watched. Apparently Mexicans believe they can bring their criminal culture to this country and use their crime skills against innocent children to make piles of money.