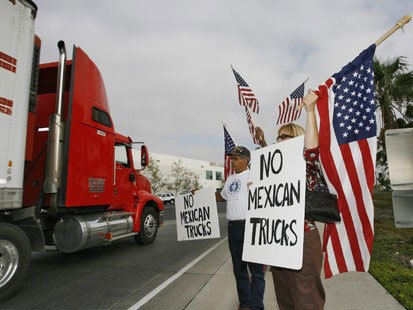 The North American Free trade Agreement (NAFTA) was signed into law by President Clinton in late 1993. It was sold by globalists of both parties as a job generator for Americans, but instead whole industries moved to Mexico for the cheaper labor, and a US trade surplus became a trade deficit to Mexico’s benefit (e.g. $44 billion in 2010).

NAFTA trucking is the last remaining segment of the deal to be implemented, and it has been fought for years by diverse groups of Americans, from the Teamster Union to politicians of both parties. 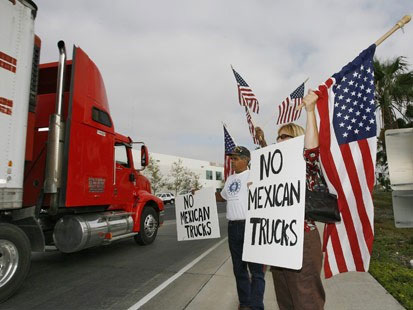 The project is particularly unconscionable in light of the worsening border violence and smuggling of both drugs and job thieves. A 2009 report from CBS noted that the “trusted trucker” arrangement with little or no inspection was a big help to criminals: Drug Smugglers Aided By U.S. Truck Program.

Democratic Congressman Peter DeFazio (a long-time NAFTA critic) has spoken up against the escalation, fearing the pilot program is actually a precursor to the whole enchilada, as he expressed in a letter to the relevant transportation authorities, the Federal Motor Carrier Safety Administration.

“This further reinforces my longstanding concern that the Administration is not launching a pilot program, but rather starting the full liberalization of cross-border trucking that will have significant impacts on safety, security, and American jobs. Proceeding with the processing of Mexican carriers’ applications on a separate track from meeting any requirements the agency believes apply to the pilot program confirms that FMCSA intends for this pilot program to casually terminate and morph into an open border. This flies in the face of the limitation enacted by Congress.”

For details on the safety aspect, see my 2007 blog Early Warning: Victims of Mexican Trucks Remembered.

On Wednesday, concerned parties assembled in San Diego to condemn Mexican trucks on American highways as a threat to jobs, road safety, sovereignty and national security:

The first Mexican carrier is set to roll into the U.S. interior within days, but the Teamsters union and two California congressmen haven’t given up on stopping the cross-border trucking program that had been stalled for years by safety concerns and political wrangling.

U.S. Reps. Duncan Hunter and Bob Filner joined Teamsters President James Hoffa at the border Wednesday to take a bipartisan stand against the pilot project that will allow approved Mexican trucks to come deep into the United States. The first one will enter Texas on Friday.

Hunter is a San Diego-area Republican, while Filner is a Democrat whose district includes California’s border with Mexico. They were surrounded at a news conference by more than 75 union members from at least five states.

Allowing Mexican trucking companies to deliver goods rather than transfer them to U.S. haulers at the border will put American jobs and highway safety at risk, they said.

“We’re literally taking good jobs here in America and passing them over the line to Mexico,” Hunter told the crowd, many holding signs reading “NAFTA kills” and “Stop the war on workers.”

Transportes Olympic’s long-haul truck will cross the border Friday at Laredo, Texas, and head about 450 miles north to Garland, Texas, to deliver industrial equipment, said Guillermo Perez, the transport manager at the firm in the industrial Monterrey suburb of Apodaca, about two hours south of Laredo.

He dismissed claims that Mexican trucking companies and their drivers do not meet U.S. safety standards. He said his company has a strict, random drug testing policy for its 61 drivers and it has bought more than a dozen trucks in the past two years.
U.S. inspectors will check the trucks Thursday and will also have a database on truckers who have been approved by the U.S. Department of Transportation, Perez said.

“It’s a really controlled program. There’s no way to avoid the law,” he said. “We are really prepared for this. It’s not weird for me that some (U.S. trucking) companies are willing to shut it down because now they have to compete with us.”

Perez declined to reveal how much his drivers earn.

The company was approved under the pilot program in 2009 before President Barack Obama’s administration cancelled it. Mexico retaliated by placing tariffs on 99 agricultural products worth more than $2 billion annually.

Mexico cut the tariffs in half this summer after Obama and Mexican President Felipe Calderon approved an inspection and monitoring program for the companies that had been approved in 2009. The Mexican government has vowed to lift the rest once the truck heads out of the border zone Friday.

“We’re really excited,” Perez said. “Now we can provide door-to-door service, so it’s about a 15 percent savings for companies.”

Opponents say the fight isn’t over.

Hunter has co-authored a bill sponsored by U.S. Rep. Peter DeFazio, D-Ore., that would stop the pilot program in three years and require Congress to vote on the issue again.

“We hope we can stop this before we have a disaster,” Filner said.

Criminal activity has been a problem for years even within the U.S. government’s strictest trusted carrier programs. Drug trafficking organizations have smuggled tons of drugs inside trucks driven by approved truckers coming from inspected and certified facilities inside Mexico.

Todd Spencer, the executive vice president of the Independent Drivers Association, which represents small independent trucking businesses, said 100,000 trucking jobs will be lost. Proponents say it will spur economic growth as companies save millions by sending the goods door-to-door.

“We certainly hope that it cannot be stopped,” said James Clark, director of the San Diego Regional Chamber of Commerce’s Mexico Business Center. “The U.S. has been in violation of the NAFTA agreement ever since the beginning of the trucking issue. Mexican trucks have every right to come into the U.S. under NAFTA as long as the trucks are fully inspected to U.S. standards and the drivers speak English.”

Supporters say especially strict safeguards have been implemented: Electronic devices will track the routes drivers take, how long they drive and how long they rest. Participating drivers must undergo national security and criminal background checks, and inspectors will administer oral English-proficiency exams.

Three U.S. trucking companies have been given the green light under the program to drive into Mexico, according to the Mexican government. But Hoffa said American truckers don’t want to drive into Mexico because of the country’s violent crime problem.

About 70 percent of goods from the $4 billion trade between the two nations are transported by land, according to the Mexican government.