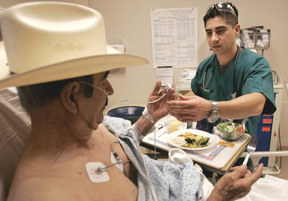 The people running healthcare corporations would love to lower their costs (though not ours) by hiring foreign nurses on the cheap. Mexico is so handy, plus many of their patients in southern California are Mexican anyway. ("More than 80 percent of patients at El Centro Regional are Spanish-speaking, for example, and most are originally from Mexico.")

EL CENTRO – For years, the Imperial Valley's largest hospital has grappled not only with the national nursing shortage but with a lack of Spanish-speaking nurses able to communicate easily with the Latino patients who fill most of the beds.

The solution may be right next door, in Mexico.

"For the valley, nothing makes more sense," said Tomas Virgen, assistant chief nursing officer at the 163-bed El Centro Regional Medical Center. After years of searching as far as the Philippines for nurses, El Centro Regional has begun recruiting in the Baja California capital of Mexicali, a dozen miles south.

Potentially, an unlimited number of Mexican nurses could work in the United States under a special provision of the North American Free Trade Agreement, but few are trying, and only a small portion of those have been successful.
[State and national nursing shortages could be addressed by hiring from Mexico, San Diego Union Tribune, Jan 13, 2008]

In addition, check out the slide show with audio about Mexican nurses included with the article. One Mexican working in the US complains that there is racism in Americans' objections to importing foreign medical personnel from Mexico. But Mexico has the lowest pass rate of nationalities currently applying to work here. That's not racism but a realistic recognition on the part of Americans that Mexican culture lacks an interest in scholarship.

"Their bedside manner, their caring for patients are some of the best I've ever seen," said Tony Minks, chief operating officer for Kaiser Permanente. "Where they need help is with the technology that we have."

Talk about damning with faint praise. Most Americans would prefer nurses with a strong training in medicine and science, rather than dubious touchy-feely skills in hand-holding.

Of course, sub-standard Mexican nurses in hospitals with a mostly Hispanic clientele would be a camel nose under the tent.

Look forward to being issued a Spanish phrase book with your stylish hospital gown at some future surgery.