I wrote in VDARE.com about Mexico's culturally accepted animal cruelty in 2004 — They Kill Horses, Don't They? (Mexicans, That Is.) — so it's nice to see the New York Times get around to the topic, albeit in a watered-down fashion. Today's focus in on the culture clash created by Mexican rodeos, charreada in Spanish: Rough Events at Mexican Rodeos in U.S. Criticized.

But now the charreada, which is strictly amateur, is facing its biggest challenge. After criticism from animal rights and anti-rodeo activists, eight states over the last decade have cracked down on several events, most notably horse tripping, a centuries-old tradition that involves roping and snaring the front legs of a running mare and that can cause serious injury. As a result, no charros in the federation practice horse tripping.

In a law that takes effect next month, Nebraska is also banning steer tailing, in which a charro grabs a steer’s tail, wraps it beneath his stirrup and flips the animal to the ground. The legislation grew out of abuses uncovered by the Omaha Humane Society at an unsanctioned arena, in which some horses had rope burns and torn tendons and were severely emaciated.

For those who spend their weekends on the dusty rails, these new laws seem to be singling out their culture unfairly. They argue that other sports involving potential injury to animals, like dressage, polo and thoroughbred racing, continue relatively uninterrupted, despite the recent high-profile deaths of the thoroughbreds Eight Belles and Barbaro.

”I sometimes feel like we’re the witches in Massachusetts,” said Mr. Franco, whose federation sets the rules and regulations for the charreadas.

If Mexicans residing in the United States knew anything about American culture, they would understand that we strongly disapprove of animal cruelty, period. But to many Mexicans, expressing even the sicko parts of their culture is paramount.

One thing I've noticed in New York Times stories which include diversity is that the good stuff is sometimes tucked away in the multimedia section. This article is no exception: the audio slideshow reveals more of the cruelty and desire to implant Mexican culture in America than is shown in the text. Marcos Franco, a booster and participant of charreada, noted, "When we were really in our heydays out there, they felt that they were in Mexico, even though they were in the States. They used to call it the reconcito Mexicano, the little corner of Mexico... That's what's beautiful about this country."

Regarding horse tripping (shown below) which has long been opposed by Americans as tremendously cruel, Franco insisted that if the horse is roped by only the front two feet, no injury occurs. Ri-i-i-ight. But even he admitted there are unsanctioned charreada events that offend him: "They have these free-for-alls that, my god, I am 100% against. Because of their misconduct, we pay the price." 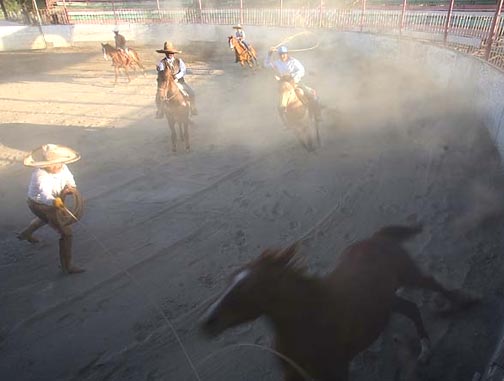 According to the audio slideshow, Jose Duran is building a "state-of-the-art lienzo" (Mexican rodeo ring) with his family in Patterson, California. "What we hope is this place will be a place where we'll teach our new generation our culture. This is my son Gabriel and Amelio, and hopefully they'll take this thing over and learn what it means and help me make this work. When they dress with a charro suit, with a charro outfit, they can feel that their body is being covered by the Mexican flag."

So the next time you see a Mexican dressed in traditional charro regalia, you'll have an idea of its cultural meaning!