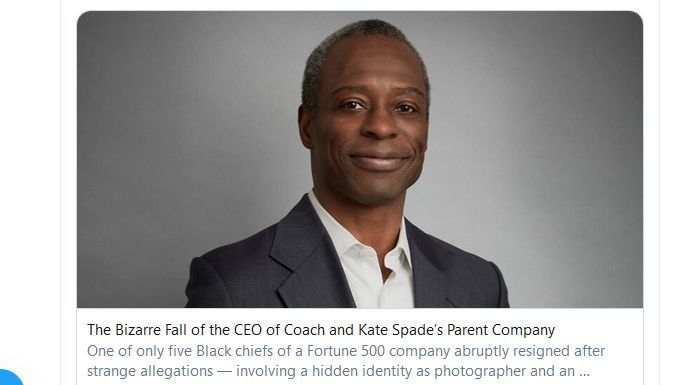 One of only five Black chiefs of a Fortune 500 company abruptly resigned after strange allegations — involving a hidden identity as photographer and an extramarital affair — resurfaced.

When I asked Jide Zeitlin late last year about a 10-year-old article accusing him of using “deception to lure a woman into an unwanted romantic relationship,” his denial was absolute. “It’s not true,” Zeitlin stated. “OK? That’s on the record. It’s not true.”

Why would a wealthy Goldman Sachs partner need to create a false identity to lure a woman into an unwanted romantic relationship? What was his false identity: rightful heir to the throne of Wakanda?

Zeitlin, then the CEO of Tapestry — parent company of luxury brands such as Coach, Kate Spade and Stuart Weitzman — went so far as to urge me to dig into his background. “I’m pretty certain you’re not going to find any paper trail on me playing those kinds of games,” Zeitlin said.

… On Tuesday, the company announced Zeitlin had resigned “for personal reasons,” only four months after it had extended his contract for three years. Zeitlin issued a statement to The Wall Street Journal that said, “In the past month, a woman I photographed and had a relationship with more than 10 years ago reached out to various media organizations to express her concerns about what had occurred. …

The resignation represented a calamitous fall for Zeitlin, 56, one that was nearly as improbable as his rise. Born in Nigeria, the son of a maid, Zeitlin was largely brought up by an American family (which eventually became his legal guardian) and rose to become a rare Black partner at Goldman Sachs before eventually becoming one of only five Black CEOs among Fortune 500 companies.

Zeitlin enjoyed a gilded reputation. His partnership at Goldman Sachs earned him more than $100 million when the firm went public and placed him in the financial elite. …

Recently, Zeitlin’s star had risen even higher as he propelled himself into the national conversation on race. Zeitlin’s fearless embrace of the Black Lives Matter movement had an authenticity and depth few corporate executives can muster. On June 1, he posted a moving essay on LinkedIn, addressing George Floyd’s killing and the looting that had occurred at a number of Tapestry retail stores. “We can replace our windows and handbags,” he wrote, “but we cannot bring back George Floyd, Ahmaud Arbery, Breonna Taylor, Eric Garner, Trayvon Martin, Emmett Till, and too many others. Each of these black lives matter.”

The essay became a sensation, and it made Zeitlin a leading corporate voice for social change. He spoke about the movement in a June 3 appearance on ABC’s “Good Morning America,” and then on June 21, he was on CBS’ “Face The Nation.”

Yet for all of Zeitlin’s accomplishments, there were troubling episodes in his past. Perhaps most surprising, many of the facts were out in the open to an extent that raises the question of how closely, if at all, Tapestry’s board of directors vetted its CEO before appointing him last year. The company didn’t respond when asked how it had missed information, some of it available in a simple Google search.

… Working under an alias, he took photos, many sexual, at least some involving nudity, of women in a studio just feet from where his wife and children lived. He had what he now acknowledges was an “inappropriate relationship” with one of the women he photographed. That life had surfaced in 2009, hindering a chance for him to enter government service, only to be publicly left behind — until today….

His was a tale worth telling. Since the day he was born to a single mother in sub-Saharan Africa, Zeitlin’s life has been something bordering on the incredible. … Arnold Zeitlin was a veteran foreign correspondent for The Associated Press. He and his wife had two young children and when Olajide, or Jide as he was known, would visit his mother at their house, he’d play with one of the family’s daughters. The Zeitlins, thinking Jide would get a better education in Lagos, suggested he live with them, an arrangement his mother embraced. “She was an amazing mother who just didn’t have a lot of resources,” Zeitlin told Forbes Africa in 2012. My guess had been that Jide was the son of the white man and the maid, but Zeid looks like a pretty normal West African in photos.

When the Zeitlins moved to Pakistan in 1970, they asked Jide, who was 5, if he would like to join the family and move there. Jide said yes. And for the second time, Jide’s mother agreed to let him go. Eventually, the Zeitlins would become his legal guardians, and he took their last name.

… the Zeitlins sent him to Milton Academy, a prep school. After that, Zeitlin was off to Amherst College…

A fortuitous meeting with a partner at Goldman Sachs led to a summer internship. …

Within weeks of his arrival, Zeitlin got another huge break when he became the protégé of Hank Paulson, who was then running Goldman’s Chicago office and en route to becoming its CEO in 1999 and secretary of the Treasury in 2006. In 1996, Goldman named Zeitlin a partner. When the firm completed its own initial public offering in May 1999, his .325% ownership stake was worth $117 million after the first day of trading….

Zeitlin’s testimony was not sitting well with Gretchen Raymond, a 38-year-old mother of two in Stamford, Connecticut, then working as a private chef for a billionaire in nearby Greenwich. Raymond had met Zeitlin two years earlier, in January 2007.

On Dec. 9, 2009, the day after his confirmation hearing, Raymond emailed Max Gigle, then a staff assistant to Connecticut Sen. Chris Dodd, an influential member of the Senate Foreign Relations Committee. “This man has put me and my family through hell,” she wrote of Zeitlin. …

Actually, Mrs. Raymond, your decision to cheat on your husband with Zeitlin played at least as big of a role.

In her email, Raymond recounted how she met Zeitlin after answering an ad placed on Craigslist, with the headline “Fit yes, experience not necessary,” by a man named James Greene, who said he was a fashion photographer working out of “Sohophoto.” At the time, Raymond was working as a fitness model and needed some photos of herself. After talking with Greene on the phone, she agreed to meet him “for a fitness shoot” at a gym. …

… Their first post-photo shoot meeting was at the NoHo Star restaurant, she said; he was leaving for a Canadian dog sledding trip that day. …

Soon after, Greene confessed to her that he had been living a double life. His real name was Jide Zeitlin. She had become suspicious of him. “It was becoming very clear to me he was not a photographer,” she recalled. “I said, ‘I want to know your real name because I want to Google you.’ He laughed and said, OK, I am James Zeitalin.’ I had him spell it and wrote it down.” The next day, she Googled that name and up popped a picture of Jide Zeitlin.

As Raymond wrote in her letter to Gigle, the Senate aide: “About one month into our friendship (approximately Feb. 24, 2007.) I discovered his true identity. He told me that he wanted to work on his photography and didn’t feel that I would have worked with him if I knew he was not a professional and he just wanted to meet me. He apologized for the deception and told me he was falling in love with me. With great regret I began a romantic relationship with Jide.”

So, the model discovered his true identity — financial superstar — and then decided to cheat on her husband with him.

At the time, Zeitlin’s wife, Tina Goldberg, was pregnant. Goldberg, who is also a Goldman M&A department alum, works in the upper reaches of the fashion industry, as the chief commercial officer at Anne Klein International. (Goldberg did not immediately reply to an email seeking comment.)

Their consensual affair lasted until October 2007, according to Raymond. “I was under the impression that he was deeply in love with me and planning a future with me,” she wrote Gigle.

Their affair, Raymond said, ended because Zeitlin told her that he had too much on his plate and needed to “figure out our life.” She was devastated. “I was absolutely heartbroken,” she said.

A month after Zeitlin ended their affair, Raymond’s husband intercepted a text from Zeitlin wishing her a happy Thanksgiving. Furious, her husband called Zeitlin’s wife and told her about the affair. Gretchen Raymond then emailed Zeitlin’s wife; contemporaneous emails between the two women, which I’ve read, make clear this was not a pleasant conversation.

Things would turn uglier still. “One week later someone came to my home and threw a construction brick through my Durango,” Raymond wrote in her letter to the Senate. When the police came, she said they told her, “Somebody is sending you a message.” …

Working together, Raymond and her husband began to uncover details about Zeitlin’s photographic work. …

All told, Raymond found seven models they believed Zeitlin had photographed, nearly all of them in demonstrably sexual poses, many lying on a bed in skimpy lingerie. Some involved nudity.

OK, this is one of the most genteel MeToo scandals I’ve heard yet: The artists and models business is a time-honored way (it comes up a lot in 19th century French novels) for gentlemen who like to look at naked ladies and ladies who like to get naked in front of appreciative gentlemen to find an excuse to get together.