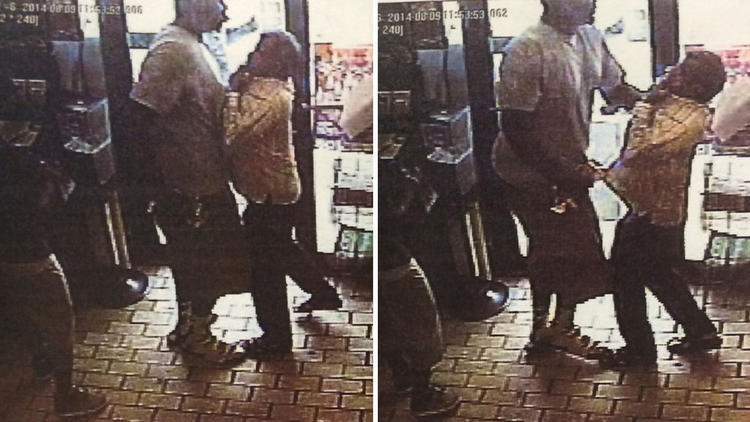 The release of security camera video footage today of the late Michael Brown robbing a Ferguson convenience store and roughing up a clerk who is half his size about ten minutes before he was killed by a policeman reveals that that Meaning of Ferguson is that the national media have embarrassed themselves yet again by grabbing some local police blotter incident and huffing and puffing it up into another narrative of America’s History of White Violence Against Black Bodies.

When the media grabs hold of a Ferguson, Trayvon, Duke Lacrosse, Jena, or Tawana Brawley story they are not presenting it as an unusual Man Bites Dog story, but as a typical Another Rabid White Dog Bites Innocent Black Child story. In a country of 300 million, you’d think they’d be able to at least come up with stories that don’t self-destruct like this under skeptical scrutiny, but it doesn’t seem to work that way.

Vaguely sensing that they’ve screwed up massively, the press is trying to spin the news as being about the insensitivity of the police releasing such inappropriate video:

Ferguson store video sparks outcry
On the same day police announced the name of the officer who shot and killed Michael Brown, they also released video implicating the teen in a robbery. FULL STORY

The manner in which the police identified the officer involved in the death of Michael Brown and released evidence that Mr. Brown was a suspect in a robbery renewed tension in the Missouri town.

The Ferguson, Mo., police chief appeared to reverse course twice over whether 18-year-old Michael Brown was stopped because of suspicions that he was involved in a convenience store robbery.

By the way, I am posting below the single most insightful passage in American literature about the causes of these recurrent fiascos. I’ve cited it numerous times over the last 27 years, but, sadly, it never loses its relevance:

From Tom Wolfe’s 1987 bestseller The Bonfire of the Vanities:The language is NSFW.Three Bronx assistant District Attorneys — Ray Andriutti, Jimmy Caughey, and Larry Kramer (the indirect narrator) — discuss elected head D.A. Abe Weiss’s current obsession with the Moore case, in which an unemployed corporate executive in the nice Riverdale suburb of the Bronx shot his mother-in-law.

[Caughey:] “Well, the guy’s white, he’s got some money, he lives in a big house in Riverdale. It looks at first like maybe he’s gonna fake an accidental shooting.”

“Naw. Fucking guy’s one a my boys. He’s your basic Irish who made good, but he’s still a Harp. He’s drowning in remorse. You’d think he shot his own mother, he feels so fucking guilty. Right now he’d confess to anything. Bernie could sit him in front of the video camera and clean up every homicide in the Bronx for the past five years. Naw, it’s a piece a shit, but it looked good at first.”

Kramer and Andriutti contemplated this piece a shit without needing any amplification. Every assistant D.A. in the Bronx, from the youngest Italian just out of St. John’s Law School to the oldest Irish bureau chief, who would be somebody like Bernie Fitzgibbon, who was forty-two, shared Captain Ahab’s mania for the Great White Defendant. For a start, it was not pleasant to go through life telling yourself, “What I do for a living is, I pack blacks and Latins off to jail.” Kramer had been raised as a liberal. In Jewish families like his, liberalism came with the Similac and the Mott’s apple juice and the Instamatic and Daddy’s grins in the evening. And even the Italians, like Ray Andriutti, and the Irish, like Jimmy Caughey, who were not exactly burdened with liberalism by their parents, couldn’t help but be affected by the mental atmosphere of the law schools, where, for one thing, there were so many Jewish faculty members. By the time you finished law school in the New York area, it was, well … impolite! … on the ordinary social level … to go around making jokes about the yoms. It wasn’t that it was morally wrong … It was that it was in bad taste. So it made the boys uneasy, this eternal prosecution of the blacks and Latins.

Not that they weren’t guilty. One thing Kramer had learned within two weeks as an assistant D.A. in the Bronx was that 95 percent of the defendants who got as far as the indictment stage, perhaps 98 percent, were truly guilty. The caseload was so overwhelming, you didn’t waste time trying to bring the marginal cases forward, unless the press was on your back. They hauled in guilt by the ton, the blue-and-orange vans out there on Walton Avenue. But the poor bastards behind the wire mesh barely deserved the term criminal if by criminal you had in mind the romantic notion of someone who has a goal and seeks to achieve it through some desperate way outside the law. No, they were simple-minded incompetents, most of them, and they did unbelievably stupid, vile things.

Kramer looked at Andriutti and Caughey, sitting there with their mighty thighs akimbo. He felt superior to them. He was a graduate of the Columbia Law School, and they were both graduates of St. John’s, widely known as the law school for the also-rans of college academic competition. And he was Jewish. Very early in life he had picked up the knowledge that the Italians and the Irish were animals. The Italians were pigs, and the Irish were mules or goats. He couldn’t remember if his parents had actually used any such terms or not, but they got the idea across very clearly. To his parents, New York City — New York? hell, the whole U.S., the whole world! — was a drama called The Jews Confront the Goyim, and the goyim were animals. And so what was he doing here with these animals? A Jew in the Homicide Bureau was a rare thing. The Homicide Bureau was the elite corps of the District Attorney’s Office, the D.A.’s Marines, because homicide was the most serious of all crimes. An assistant D.A. in Homicide had to be able to go out on the street to the crime scenes at all hours, night and day, and be a real commando and rub shoulders with the police and know how to confront defendants and witnesses and intimidate them when the time came, and these were likely to be the lowest, grimmest, scurviest defendants and witnesses in the history of criminal justice. For fifty years, at least, maybe longer, Homicide had been an Irish enclave, although recently the Italians had made their way into it. The Irish had given Homicide their stamp. The Irish were stone courageous. Even when it was insane not to, they never stepped back. Andriutti had been right, or half right. Kramer didn’t want to be Italian, but he did want to be Irish, and so did Ray Andriutti, the dumb fuck. Yes, they were animals! The goyim were animals, and Kramer was proud to be among the animals, in the Homicide Bureau. ….

Here they were … and here he was, and where was he going? What were these cases he was handling? Pieces of shit! Garbage collection … Arthur Rivera. Arthur Rivera and another drug dealer get into an argument over an order of pizza at a social club and pull knives, and Arthur says, “Let’s put the weapons down and fight man to man.” And they do, whereupon Arthur pulls out a second knife and stabs the other fellow in the chest and kills him … Jimmy Dollard. Jimmy Dollard and his closest pal, Otis Blakemore, and three other black guys are drinking and taking cocaine and playing a game called the dozens, in which the idea is to see how outrageously you can insult the other fellow, and Blakemore is doing an inspired number on Jimmy, and Jimmy pulls out a revolver and shoots him through the heart and then collapse on the table, sobbing and saying, “My man! My man Stan! I shot my man Stan!” … And the case of Herbert 92X –

… The press couldn’t even see these cases. It was just poor people killing poor people. To prosecute such cases was to be part of the garbage collection service, necessary and honorable, plodding and anonymous.

Captain Ahab wasn’t so ridiculous, after all. Press coverage! Ray and Jimmy could laugh all they wanted, but Weiss had made sure the entire city knew his name. Weiss had an election coming up, and the Bronx was 70 percent black and Latin, and he was going to make sure the name Abe Weiss was pumped out to them on every channel that existed. He might not do much else, but he was going to do that.