It’s curious the extent to which the liberal press goes to protect hostile Muslims, as it pretends that none of the group aims to murder infidels in acts of jihad. Not every Muslim is an actual bomber or headchopper of course, but Islam’s holy book does instruct all followers to kill non-believers who will not submit: the Koran has over a hundred verses that sanction violence.

Below, Uzbeki Sayfullo Saipov (who entered the US under the diversity visa program) hijacked a truck and careened down a New York City bike path, killing eight on October 31. He screamed “Allah Akbar” as he murdered. 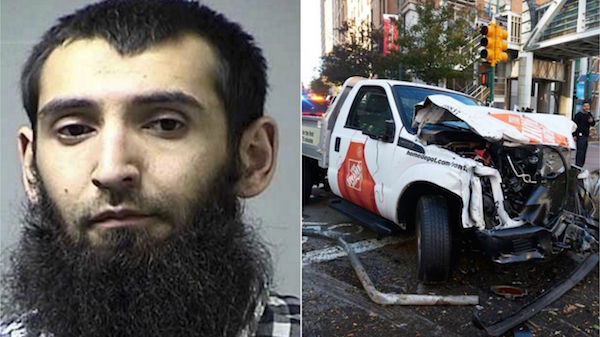 Does the MSM believe it is protecting Muslims residing the US from lynch mobs of Americans, angry at jihad slaughter? Nothing of the kind has occurred despite mass murders for Allah from 9/11 in Manhattan to Orlando and San Bernardino.

Or is the press just so dedicated to the failed ideology of diversity that it will go to any length to protect it?

Robert Spencer takes up a symptom of media malfeasance in how it treats the usually hostile scream of “Allahu Akbar” which often signals a jihad attack — not to worry, according to lib scribblers!

Spencer’s video is a recapitulation of an article from a few weeks ago:

On Halloween last Tuesday, a Muslim named Sayfullo Saipov drove a truck onto a Manhattan bike path and murdered eight people while screaming “Allahu akbar.” In response, the establishment media has gone into a full-court press to convince Americans that “Allahu akbar” is not a phrase anyone needs to be concerned about.

The worst article, among many, was published in the New York Daily News. Zainab Chaudry of the Hamas-linked Council on American-Islamic Relations (CAIR) argued that non-Muslims shouldn’t “believe the worst” about “Allahu akbar” because Muslims don’t just scream it while murdering non-Muslims, but use it in a variety of contexts.

That is true, but it doesn’t change the fact that Muslims scream “Allahu akbar” while killing infidels because the phrase means “Allah is greater” — not “God is greatest,” as she falsely claims. It is a declaration of the superiority and supremacy of Islam.

So the next time you hear Allahu Akbar — whether it’s in a media report, on an airplane, or in a shopping mall, remember that the phrase used by millions of Muslims and Christians daily to praise God regardless of their circumstances, can never be justified for use when harming His creation.

This is deadly advice. If you hear “Allahu akbar” yelled on an airplane or in a shopping mall, you may well be in the midst of a jihad terror attack. If people on that airplane are now conditioned by Chaudry and the establishment media, they may not fight back. If people in that shopping mall listen to Chaudry, they won’t immediately run, because that would be “Islamophobic.”

And so the casualties will be maximized.