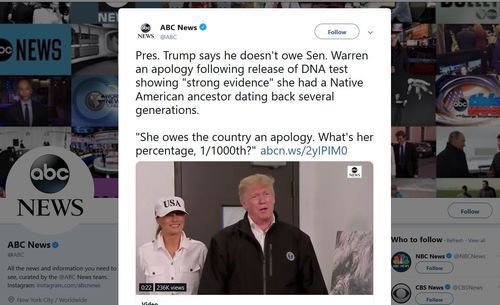 "She owes the country an apology. What's her percentage, 1/1000th?" https://t.co/cyAHgf38yt pic.twitter.com/lZrxHjhpBI

I am looking forward to the rebound controversy tomorrow in which the Prestige Media takes Trump’s bait and runs stories denouncing Trump for LYING that Senator Elizabeth Warren is only 1/1000th American Indian when the Settled Science suggests she is actually more likely 1/256th American Indian.

n his recent memoir of working for Richard Nixon in 1966-68, Pat Buchanan pointed out a trick Nixon repeatedly played on the press. Pat would write a line like, say, “A recent audit of the Bureau of Indian Affairs found that 92% of the budget was wasted.” Nixon would change the number to 98%.

The press would run his remarks about 98% wasted, then the next day make a big deal about how Nixon was WRONG, the real number isn’t 98% wasted it’s just 92% wasted. Nixon pointed out to Buchanan that that way he got the story he wanted to campaign upon in the newspapers for two days instead of just one day.

More generally, how is this controversy between the Establishment Media and the President over exactly what tiny fraction of Senator Warren’s ancestry entitled her to apply for Affirmative Action and claim the mantle of Diversity as an American Indian going to work for the Democrats’ benefit in November?

Normally, the establishment press really, really doesn’t like talking about the workings of the affirmative action system at all, only bringing it up usually when it reaches a court case. But now everybody is talking about this farcical case.

We are all supposed to be talking about White Privilege and how Race Is Just a Social Construct, not about how an extremely white woman engaged in Flight from White as she was building her career and defends herself today by saying race is so incredibly scientifically real that scientists can measure her 1/256th Native American ancestry.