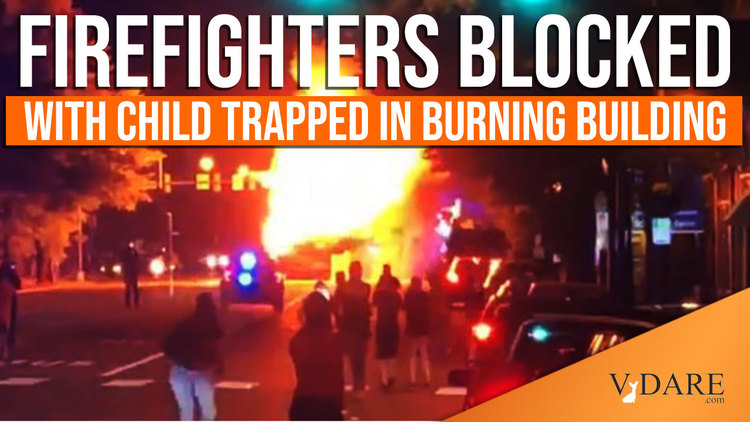 May 31, 2020 BLM Terrorists Set Fire To A House With A Child Inside, Then Tried To Stop Firemen From Getting Through

Anyone who supports Black Lives Matter is a terrorist. You support individuals who engaged in shocking violence across America during 2020, all in the name of a black career criminal who long ago held a gun to the belly of a pregnant of a woman during a home invasion.

Yes, this is why George Floyd was in jail. A sane society would have never allowed him out.

Our society? Allowed him to become a martyr in late of May of 2020, causing massive damage to our nation’s biggest cities, and shocking violence nearly causing a child to be burned alive in Richmond, Virginia as Black Lives Matter protesters blocked firefighters from battling a fire and removing said child from the building.

VA Police Chief: FFs Blocked from House Fire with Child Inside: During an emotional news conference, Richmond Police Chief Will Smith said police needed “to force our way to make a clear path for the fire department” to reach the scene of the blaze., FireHouse.com, June 1, 2020

Firefighters were blocked over the weekend from trying to reach a burning house with a child inside, an emotional Virginia police chief said during a Sunday news conference.

Richmond Police Chief Will Smith said rioters had intentionally started a fire in “an occupied building on Broad Street” early Sunday. Officers were called in because fire apparatus were being prevented from reaching the scene.

“This is not the only occupied building that has been set fire to over the last two days,” Smith said. “But they prohibited us from getting on scene. We had to force our way to make a clear path for the fire department. Protestors intercepted that fire apparatus several blocks away with vehicles and blocked that fire department’s access to the structure fire. Inside that home was a child.”

Firefighters and police eventually were able to help the people, he added. But the chief and Richmond Mayor Levar Stoney decried the actions of individuals who were using protests to cause violence and destruction.

“Peaceful protests in solidarity against the injustices of black men hijacked by bad actors,” said Stoney, according to WTVR-TV. “As soon as you loot a store or set a public bus on fire, you’re not demonstrating. You’ve made it about you. When you block law enforcement from allowing fire services to get to a home that has caught on fire. You are not inspiring change. When you knock out windows of businesses that had nothing to do with this, you are not inspiring change. That’s an insult to the cause.”

Smith said these “bad actors” are to blame for violence not only against police officers but also other city residents.

“We’ve had a number of people that have been injured by thrown bottles, rocks, bricks, everything that you can imagine, thrown by other protesters. As the mayor said, our protest has started out peacefully every single night with respectful people voicing their legitimate concerns. We’ve been able to facilitate them in their First Amendment rights, but it hasn’t taken too long each night before actors have taken over the protest and have changed the tone.”

What happened in 2020 America is beyond evil, and those who promote the insidious idea of Black Lives Matter are willing participants in a terrorist idea, that brought our country to its knees because people were too afraid to call out these seditionists for their actions.