Massive Support Across the Board for Trump's Latest Travel Ban

The percentages who approve and disapprove of “the travel ban between the U.S. and Europe,” with residuals representing “not sure” responses: 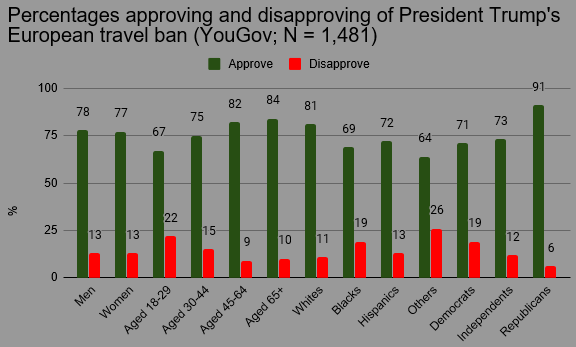 Maybe not better dead than "racist" after all. On the other hand, the ban applies to Europe, so even though they’re more cultured etc. than we are, they’re still white and therefore okay to discriminate against.

Politics is about power. If a crisis is not leveraged to accrete a leader’s own power, it will be used to augment the power of his opponents. Corporate tax cuts, the raging bull market, and low unemployment have transformed from campaign assets into devastating liabilities.

Fortunately for Trump, the girl he brought to the dance may still take him back after being ditched for three years in the thrall of globalism’s siren song. The America First agenda of strong borders, domestic production, and prioritizing the well-being of American citizens over hostile foreign nations is his way to four more years if he has one.