Nothing reveals the bad faith of the open-borders gang more than their refusal to embrace policies that deal with dangerous criminals. Raza fanatics et al often say they are genuinely anti-crime blah blah, but when a program is actually effective in protecting the public from foreign thugs, the illegal-alien cheerleaders do everything they can to destroy it.

As they do against the common-sense Secure Communities policy.

MOST ILLEGAL immigrants worry about being deported, so it is not unusual that they fear the police. This fear erupted into protests when Governor Patrick announced in December that Massachusetts would implement Secure Communities, a federal program that helps Immigration and Customs Enforcement (ICE) coordinate efforts with state and local police to find and remove criminal illegal immigrants.

Under this program, the fingerprints of arrested criminal suspects would be checked against federal immigration databases. In Boston, where it was first piloted, in the last two years, ICE put 268 felons on the path to removal to their home countries. The Patrick administration has held public hearings across the state, ostensibly to explain the program to the immigrant population. But the governor's delay exacts a real cost to our state.

What rational argument can there be for allowing illegal immigrants who commit crimes to stay here in defiance of immigration laws?

We attended the public hearings in Framingham, Lawrence, Waltham, Chelsea, and Brockton, and watched representatives of ethnic and civil liberties groups, the Socialist Workers Party, and a service workers union speak against Secure Communities. These advocates declared that, far from enhancing safety for all, the information-sharing would undermine it, as immigrants would stop reporting crimes because they fear they would also be deported.

But this fear is unwarranted. It is not based on experience, but on the misleading portrayal of Secure Communities by its organized opponents who seem to believe that Massachusetts should remain a sanctuary for illegal immigrants. What they should be telling immigrants instead is that not a single innocent crime victim, not in Boston nor in the 41 other states where Secure Communities operates, has been deported after reporting a crime. It is longstanding ICE policy that victims and witnesses are not targets of immigration law enforcement. 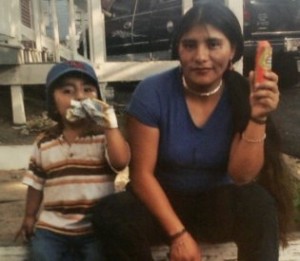 Secure Communities might have protected Maria Palaguachi-Cela and her young son [pictured] from Luis Guaman, an illegal immigrant accused in February of murdering them and throwing their bodies in a dumpster outside their Brockton apartment. Guaman had prior arrests under different names, first for domestic violence in New York, and then for a stabbing in Brockton.

If this program had been in place earlier, ICE probably would have sent him home a long time ago.

Opponents cite statistics showing that the violent felons make up "only'' 39 percent of the offenders processed by the Boston ICE office. But whether or not they are all violent is irrelevant. It makes little sense to the average person that petty foreign criminals should be immune from immigration laws. And many escape conviction because local prosecutors drop charges when they realize ICE will seek to remove them. Hundreds of others in this category are serial immigration scofflaws who have been ordered deported before.

By opposing Secure Communities, illegal immigrants adhere to a calculus that an imagined increase in the possibility of deportation if one reports a crime outweighs the danger of tolerating an entrenched criminal population. But, in reality, if Patrick allows Massachusetts to remain a sanctuary state, how many crimes will have to transpire before shattered and enraged citizens demand that he turn that calculation on its head?

Jessica Vaughan is a researcher with the Center for Immigration Studies. Mike Stopa is a nanophysicist at Harvard University who blogs at www.mikestopa.com.