Maryland Community Lives in Fear Because of MS-13 Gang

A few years ago, President Obama opened the southern border to illegal aliens from Central America, thereby inviting the ultras-violent MS-13 gang into the United States.

(Is it a stretch to call the gang “ultra-violent”? Try this headline from the New York Post (Nov. 22): Decapitated MS-13 victim stabbed 100 times, heart ripped out of chest.)

As Judge Jeanine Pirro remarked on a televised interview:

If you recall they came into this country in 2014 under the Obama administration policy of allowing in those from Central America — El Salvador, Honduras and Guatemala. I was one of those people saying look, as a DA, MS-13 is from El Salvador; they are without a doubt the most violent gang where initiation involves beating someone to death in front of others. . .

In the April 2017 video below, Tucker Carlson said that ISIS is “nothing compared to MS-13 . . . unlike ISIS, MS-13 makes it hard to live in certain neighborhoods here in this country. Also unlike ISIS, there are a lot of them. ISIS may have a significant passive support in the U.S. and a lot of us suspect it does, but true active ISIS members — pretty small, maybe a few hundred at most. MS-13, by contrast, has at least 6,000 members.”

There have been arrests of MS-13 gangsters, like the 200 rounded up this fall. But with thousands of them in the country, thanks to Obama, getting rid of the crime monsters will take a while.

MS-13 members are apparently into tats. 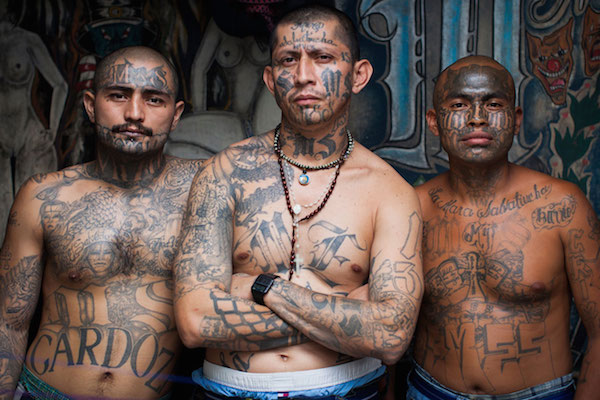 The Washington Post highlighted the crime crisis on Thursday, with a sob story photo of a crying immigrant, Abigail Bautista — oh wait, she’s an illegal alien, as the reader learns later in the article. The Post can’t bother to find a citizen who has been harmed by the gang, although there is no shortage. 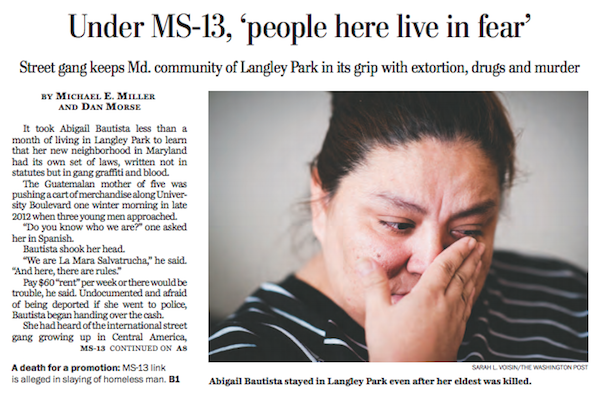 The link below has a substantial snip from that article:

It took Abigail Bautista less than a month of living in Langley Park to learn that her new neighborhood in Maryland had its own set of laws, written not in statutes but in gang graffiti and blood.

The Guatemalan mother of five was pushing a cart of merchandise along University Boulevard one winter morning in late 2012 when three young men approached.

“Do you know who we are?” one asked her in Spanish.

“We are La Mara Salvatrucha,” he said. “And here, there are rules.”

Pay $60 “rent” per week or there would be trouble, he said. Undocumented and afraid of being deported if she went to police, Bautista began handing over the cash.

She had heard of the international street gang growing up in Central America, where MS-13, as it’s known, controls cities through brutality and corruption. But she had lived for the better part of a decade in the United States without crossing its path.

As the gang has grown in strength in recent years, so has its sway over communities across the country. From Boston to Northern Virginia to Houston, a string of grisly MS-13 murders has highlighted its resurgence, drawing a response from the White House.

“One by one, we’re liberating our American towns,” President Trump said this summer in Long Island, where MS-13 has been linked to more than a dozen recent killings.

Left out of Trump’s speeches, however, is the fact that most of the gang’s victims are not Americans but undocumented immigrants like Bautista. And when it comes to the gang’s infamous motto of “kill, rape, control,” it’s the third — enforced daily through extortion and intimidation — that defines life for some immigrants in places such as Langley Park.

“They are preying on the communities that they are living in,” said Michael McElhenny, a supervisory special agent for the FBI in Maryland.

More than a decade after a string of MS-13 killings shook the heavily Latino neighborhood, Langley Park is still struggling to shake off the gang’s influence. Despite aggressive policing, the area continues to be plagued by MS-13 drug dealing, prostitution, robbery, extortion and murder, according to court records and interviews with residents, activists, prosecutors and gang experts, as well as local and federal law enforcement officials.

Patel said there was a slight decline in violent crime in Langley Park between 2013 and 2016, although he acknowledged that the gang remains active in the neighborhood.

In fact, prosecutors consider Langley Park a “hub” of MS-13 activity and say the gang was likely responsible for all five slayings there in the past four years.

Bautista wasn’t the only one extorted by MS-13.

One of her neighbors was told to pay the gang or she’d find her husband’s body in a dumpster. Another said she was given days to come up with $1,500 earlier this year or MS-13 would k!ll her children in Central America.