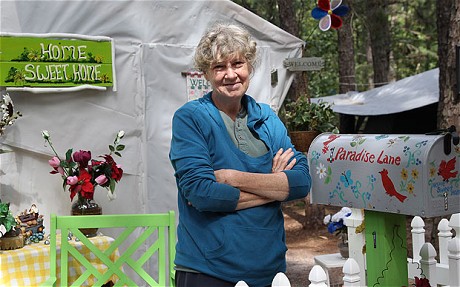 Labor Day means the mainstream press deigns to look at actual victims of America’s self-destructive globalist economy for 24 hours. On the other 364 days, we see the bloodless statistics when the government burps out new ones, but without a human face.

(Pictured is Marilyn Berenzweig living in a New Jersey tent city, a far cry from her formerly middle-class lifestyle.)

Curiously, the media business has been particularly hard hit by the marketplace changes due to digitized news. Newspapers have been battered by the loss of print advertising and the switch of customers to online, which is harder to monetize. You would think the remaining scribblers would be more sympathetic to job loss, but they just aren’t. There may be some magical thinking going on, that if the bad unemployment thoughts can be kept away, so can real joblessness. (StateOfTheMedia.org: Estimates for newspaper newsroom cutbacks in 2012 put the industry down 30% since its peak in 2000 and below 40,000 full-time professional employees for the first time since 1978.)

In Silicon Valley it’s easy for media to glance around and see the problems, where formerly middle-class tech workers have been put out to pasture by outsourcing and H-1b immigration. In 2010, CBS’ Sixty Minutes did a segment on IT professionals who were over 40, jobless and running out of unemployment benefits — and hope.

These days, there is a burble of tech resurgence in the Bay Area, but only for young workers who don’t require a normal life separate from the job: forget 9 to 5, the new work normal in tech is 24/7.

“I want to stress the importance of being young and technical,” Facebook’s CEO (now 28) told a Y Combinator Startup event at Stanford University in 2007. “Young people are just smarter. Why are most chess masters under 30? I don’t know. Young people just have simpler lives. We may not own a car. We may not have family. Simplicity in life allows you to focus on what’s important.”

Whippersnapper-owned businesses (like Facebook) don’t want mature employees (who might have better ideas than recent graduates), plus the young workers are considerably cheaper, and foreign H-1b employees are even more exploitable. When experienced mature workers are hired, they often earn less than 10 or 20 years ago.

Many older workers are still struggling despite the ‘recovery’ around them, San Jose Mercury News, September 1, 2013 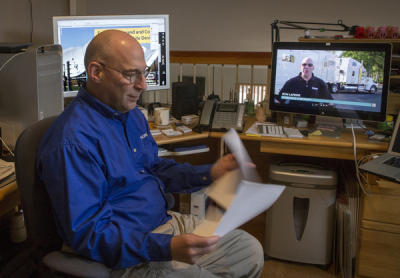 Ron LaPedis, 57, in his home office in San Bruno, Calif., on Tuesday, Aug. 27, 2013. After a series of job layoffs, part-time work, contract jobs, LePedis finally found a permanent job last year and is now about 5 percent below his highest salary of his career.

As the nation celebrates the American worker Monday, many workplace veterans are discovering that the Great Recession has been followed by a not-so-great recovery.

Labor Day 2013 comes with a dark shadow attached, as nearly half of the workers rehired last year make less than they did before losing their jobs in the economic maelstrom. For older Americans in the baby boomer generation, that percentage is even higher, with about two-thirds of them now earning less than they once did.

Even here in the relatively bustling Bay Area, where highly paid workers are flourishing in counties that boast some of the lowest unemployment rates in the state, recession veterans like Howard Greenstein, of San Jose, are angry about how things have played out.

“I feel like I’ve lost 10 years of my life,” says the 54-year-old Greenstein, whose employment woes began even before the recession when the tech company he worked for went under in 2001. After some contract jobs and part-time stints, he finally landed a program-manager job in Silicon Valley three years ago. But “I’m now making the same money I made in 1995,” says Greenstein, and much less than in his best-paid years.

Bob Withers, who works with the skilled unemployed as a program coordinator for ProMatch, a career networking center in Sunnyvale, says he’s seen the struggle up close as many long-term jobless workers try to get a toehold back in a job market where many of the well-paid positions they once held are gone, and probably for good.

“While we’ve seen a good number of people going back to work to places like Apple and Intel, but also to startups, some still aren’t making what they once did,” says Withers. “So it’s hard work breaking back in.”

What many Californians are finding is a tale of two recoveries, a narrative captured by the title of the California Budget Project’s annual report: “Uneven Progress: What the Economic Recovery has Meant for California’s Workers.” That “progress” is complicated by a triple whammy of wage stagnation, a dramatic growth of low-wage jobs in hospitality and food services, and the staggering number of jobs lost in California during the recession — 1.4 million, nearly half of which have yet to come back.

“Despite more than three years of job growth, the economic recovery has still not reached large groups of people,” Luke Reidenbach, the budget project’s policy analyst, said on a conference call with the media. “Long-term unemployment remains an issue, and many workers are just not getting the kind of work they want.”

Part of the reason that today’s rehired workers are making less than they did before the recession, says economist Sung Won Sohn with Cal State Channel Islands, is because of something called “structural unemployment,” which means that higher-paying jobs in areas like construction and manufacturing have vanished or gone overseas, causing many older workers to either give up and retire early or take a lower-paying job in another field. As a result, he says, “the percent of the overall population that makes up the labor force has been trending downward steadily and significantly.”

The recent decline in the unemployment rate is partly due to the fact that many unemployed workers have simply thrown in the towel and quit looking, Sohn noted.

“The drop in the jobless rate is an artificial thing, so we shouldn’t be celebrating,” he said.

With 600,000 fewer jobs in California than before the recession, workers like Carol Daly have had to reinvent themselves, and in the process take a serious pay cut. After 25 years in business development and product marketing, the 59-year-old Sunnyvale resident with an MBA from the Wharton School of the University of Pennsylvania has gone through the wringer of the Great Recession and come out on the other end. She’s now working as an executive assistant for a Palo Alto tech incubator, earning 30 percent less than she did at her career peak. And while she says the transition “was by choice,” she acknowledges that it wasn’t completely under her control.

“A lot of the skills I had from earlier days are now outdated,” Daly says of her experience in areas like printers and solar-panel sales. As jobs in those fields moved away, Daly saw her opportunities downsized by the workplace realities around her. “And that prompted me to go toward being an executive assistant.”

Despite the loss of pay, Daly, like many others this Labor Day, is counting her blessings. She says that even though her post-recession salary is “just enough to cover day-to-day expenses, I feel blessed to have a job, especially knowing that many others are still out there struggling to find something.”