That oh-so-lovely 73 percent black city helping birth the current paradigm white people regrettably are forced to endure until it collapses under its own weight.

The Tragic City: Birmingham 1963-2013 documents the collapse of Birmingham from a thriving majority white city into an open air civil rights museum. 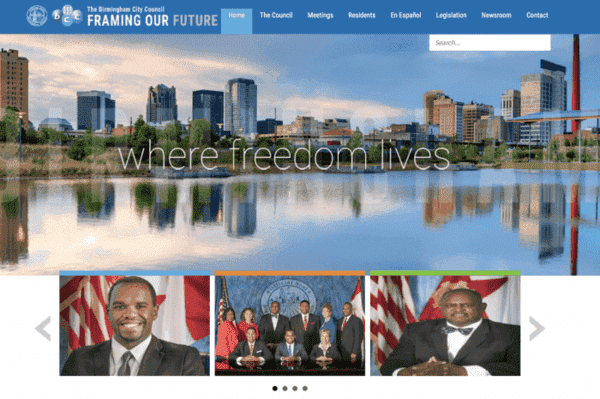 A screenshot from the city of Birmingham's city council site. The 73% black city is home to near complete black political rule, and governs all city contracts under one protocol: how can we improve the lives of our black residents at the expense of other racial groups?

When you visit the Birmingham City Government website, you learn the tagline for the city is "Where Freedom Lives."

Truly in this 73 percent black city, whose citizens help Birmingham rate extremely low on nearly every metric qualifying quality of life, is where black freedom lives and what black liberation looks like, for in the absence of white people, a uniquely African world has emerged.

With a black mayor and seven of nine black city council members, what little legitimate economic activity exists in the 73 percent black city is heavily influenced by white people and their purchasing power.

Which makes Birmingham attracting a Topgolf venue so interesting, because this will only entice whites who rebuilt the city in places like Vestavia Hills, Mountain Brook, and Homewood to venture back into The Magic City.

Topgolf is at risk of losing $1.5 million in financial incentives it received from the city of Birmingham to build a 65,000-square-foot facility near the Birmingham-Jefferson Civic Center Authority downtown.

City officials say Topgolf has failed to comply with terms of the project agreement by not hiring minority-owned contractors and subcontractors.

In a letter to Topgolf dated June 16, Birmingham Mayor William Bell said the entertainment company hasn't provided any reports to the Birmingham Construction Industry Authority on the hiring of minority contractors.

Topgolf also hasn't provided information that would have allowed BCIA to help minority and disadvantaged business subcontractors with the preparation of bids for the project, the letter states.

Topgolf agreed that at least 25 percent of their contractors/subcontractors working on the Birmingham construction would be minority-owned, city leaders said.Topgolf was given 30 days upon receipt of the letter to comply with the requirements of the agreement.

"In the event that Topgolf fails to cure the default, the city will be forced to exercise its remedies under the agreement, including termination of the agreement," the letter states.

The Birmingham City Council approved the financial incentives in November.Under the agreement, the incentives would be paid in annual installments, not to exceed $228,000, for the next eight years. Each payment is equal to 30 percent of the sales tax revenue generated to the city by the project.

The entertainment complex is under construction on BJCC-owned property at 24th Street North and 12th Avenue North. It is expected to be open by the end of the year.

The high-tech driving range will feature a full-service bar/restaurant, a 2,900-square-foot corporate and event meeting space and lobby.

The Topgolf entertainment complex is anticipated to create an economic impact of $264.5 million over 10 years to the Birmingham economy.

Not five years ago, the majority black city council was passing rules to stop new payday loan or title pawn stores from being opened in the 73 percent black city, because this was the only type of businesses the city could attract.

The city could see more than a quarter of a billion economic impact over 10 years by opening this business catering almost exclusively to wealthy white people, and the black-controlled government worries that playing a similar minority-contract shakedown game as Atlanta has done for decades will negatively impact blacks.

In a city where black freedom lives and what black liberation looks like, we learn Martin Luther King's dream is nothing more than a nightmare for white people, who are forced to not only worship this prophet as some sort of deity, but profess a religion of being color blind while every racial group is allowed to promote their racial interests and judge us exclusively via our color.

But Birmingham offers a reminder to white people they will get no special concessions when they achieve minority status in the United States. Perpetually advancing the interests of non-whites must always be the standard operating procedure for white people in the USA.