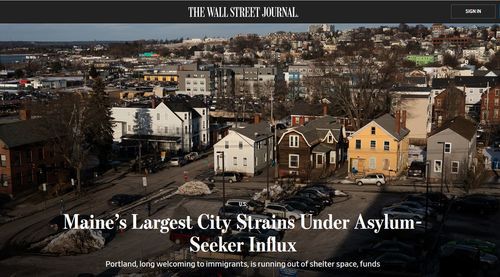 There’s plenty in the news about foreigners crossing the US border by various means but little concerning what happens to communities where they land in excessive numbers. One exception is the attention given to a Maine town that got stuck in the do-gooder trap — be generous to a few and then word gets out to thousands that freebies are available. There goes the budget!

The unlucky (or foolish) community is Portland, Maine, population 67,000, and it unwisely got a reputation as being kindly toward foreigners looking for a handout, and so now it is deluged with them. 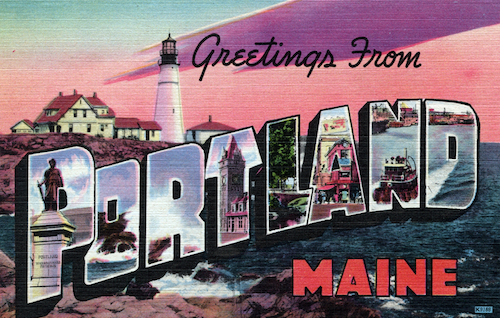 There was a detailed article in the Portland Press Herald a couple days before Christmas, Asylum seekers travel to Portland in droves, overwhelming city services.

That story may have inspired a similar piece in the Wall Street Journal that appeared more recently, reprinted on the Geller Report:

Portland, long welcoming to immigrants, is running out of shelter space, funds

PORTLAND, Maine — This community has long offered a generous hand to immigrants.

But Maine’s largest city, population about 67,000, is now struggling with an influx of asylum seekers, to the point where a local official is alerting shelters in other parts of the country to discourage people from heading here.

“The word is out there that our community is open to that population and has some assistance programs,” said David MacLean, administrator of Portland’s Social Services Division. “Our local resources are not able to keep up.”

Asylum seekers, who are primarily from African countries, now make up 90% of the people living in Portland’s city-run family shelter and overflow shelter, where new arrivals sleep on mats. A city fund that assists with necessities is dwindling fast, and pro-bono lawyers are overwhelmed with cases, Mr. MacLean said.

Portland’s strain comes as the number of asylum requests, in which people ask to be allowed to stay in the U.S. for humanitarian reasons, has ballooned. That is contributing to the well-publicized bottleneck at the Southwest border and the political clash over it.

Portland’s challenge is expected to drive new debate around immigrant assistance in the state, where Democrats recently gained control of the legislature and the governor’s seat.

A 40-year-old asylum seeker, who recently came to the bare-bones overflow shelter, said he had worked for an oil company in Angola. He believed he was in danger because he voiced his views about government corruption and traveled to the U.S. on a visa with his three children and wife, a social worker, he said. He planned to seek asylum and had heard Portland was safe.

“I hear they help people,” he said.