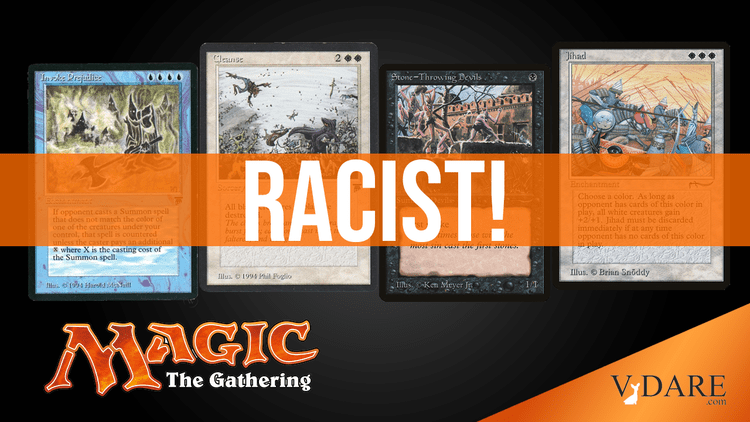 Is there anything Wokeness won’t spoil? Rhetorical:

We will be changing the multiverse ID and removing the Gatherer card image for the card Invoke Prejudice, originally printed in 1994. The card is racist and made even worse by the multiverse ID it was unfortunately codified with years ago. There’s no place for racism in our game, nor anywhere else.

But to that point, it should never have been published nor placed in the Gatherer. And for that we are sorry. The events of the past weeks and the ongoing conversation about how we can better support people of color have caused us to examine ourselves, our actions, and our inactions. We appreciate everyone helping us to recognize when we fall short. We should have been better, we can be better, and we will be better.

To that end, we will be removing a number of images from our database that are racist or culturally offensive, including:

“We have removed this card image from our database due to its racist depiction, text, or combination thereof. Racism in any form is unacceptable and has no place in our games, nor anywhere else.”

The subsequent pieces of art will all be replaced online with this: With Wokeness there can be no art, no humor, no beauty, no aspiration. Just a grayed-out rigid conformity, the only emotions permitted being resentment and snark. Cleanse got the boot because of its field text, which reads “destroy all black creatures.” Hunting down a specific black creature, in contrast, is still okay–for now: Pfft, sadly no one cares about black-on-black crime, that’s the only reason Dark Betrayal gets a pass. For heaven’s sake, look at the flavor text: “You’re just like me; ruthless, cunning, and ambitious. Obviously you’re a threat.” Dialogue ripped right off the streets of South Chicago!

Oh yeah? Then explain how this cleric who specializes in destroying black creatures still has a job. It’s only a matter of time before Mass Calcify gets uncarded: Because whites can tolerate massive calcium dumps, you see. Milk does a Euro body good! Hispanics, Asians, and other non-white non-blacks need to get complaining, pronto. Or their self-appointed white allies need to, anyway! Subsequent reprints of the card replaced real world historical references with generic fantasy depictions. As is always the case when Woke mobs have something in their sights, though, no amount of appeasing deterred them from destroying the target of their wrath.

These exiled cards are, on top of being digitally deleted, now officially banned from sanctioned play:

Additionally, these cards will be banned in all sanctioned tournament play.

The uncarded cards aren’t competitive, so it’s an empty gesture. In the case of Crusade, Honor of the Pure—a name that must itself be problematic—is strictly better: Imprison is banished because it’s a black card that includes the word “prison” and appears to depict a black or possibly north African man in a tight spot. The card game is rife with brutal depictions of people of all races suffering, though the overwhelming majority of the victims (and the perpetrators) appear to be of European ancestry: Invoke Prejudice is the most triggering card of the crop. The figures depicted in the artwork look like what Dali painting klan geists might. That the artwork is hardly flattering provides no apology. Remember what happened to the Papa John’s guy for uttering the N-word in the context of how horribly offensive it is? He got the Invoke Prejudice treatment, too. Parenthetically, Invoke Prejudice is a blue card. The game’s five-color scheme doesn’t have any correspondence to differences among human races. It does, in proper Tolkienesque-fashion, have something to do with different humanoid species, but even those boundaries aren’t hard and fast. Sorin and Liliana are depicted as racially white—but they are black cards: While Teferi the protector is a black man of the dual colors white and blue: Wizards of the Coast threw out Crusade on account of the alleged racist nature of the card (good grief, the things we have to write and say in this day and age of stultifying intellectual totalitarianism). It also tossed Jihad for a presumably similar reason: For those unfamiliar with the game, the insinuation from the card text is that the “Jihadis” are white (by card color). So both Crusade and Jihad are white cards—to oversimplify, they’re on the same team—and both are being banned for putative racism. Racist against who exactly is unclear. I guess the world’s two largest religions, both of which are gaining more new converts in Africa than anywhere else, are racial in their essence. Who knew?

The next one is kind of funny. These gypsies steal the power of the opposing side’s forces: The bigger insult to the noble Roma people is how crappy the card is. Even in the olden tymes, before the great creature power inflation and corresponding spell deflation occurred, this card was bad.

Is “stone-throwing devils” a slur of some kind? It’s genuinely hard to even figure out a pretense otherwise: The creatures look like pink-hued devils. Is the thinking this could be construed as a derogatory depiction of American Indians? That seems absurd even in this hysterical context.

Parenthetically, card names, artwork, and flavor text have no bearing on actual game play. They are aesthetic enhancements that provide the experience flair and vivacity. But in terms of actual mechanics, everything about Magic is strictly rules-based. The cards could be called A1, A2, A3 … ZZZ212, ZZZ213, ZZZ214 and nothing about the game play itself would change. Magic is not like Dungeons and Dragons, where players make things up as they go along. To analogize, Magic is to Poker what Chess is to Checkers.

The release concludes with:

There’s much more work to be done as we continue to make our games, communities, and company more inclusive. Know that we work every day to be better and that we hear you. We look forward to sharing more of our plans with you as our games and organization evolve.

If by “evolve” we mean card burning, then yes, yes indeed. Wokeism, like its spiritual predecessor Puritanism, is mortified by the idea that some people, somewhere might be enjoying themselves.