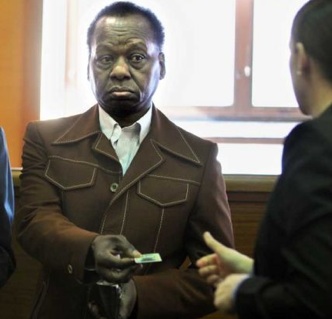 How common and unpunished are drunk driving illegal aliens in America? One measure: the uncle of the President is one (pictured), and Omar Onyango is doing just fine, back at his liquor store job and in possession of his driver’s license, after a mere 45 days without it after a drunk-driving bust.

Today’s lawbreaking topic is the failure of Mothers Against Drunk Driving (MADD) to criticize the Senate’s criminal-friendly amnesty bill, specifically on its drunk-driving permissiveness.

I investigated MADD for a 2008 VDARE.com article, Mothers Against Drunk Driving: Successful Reformers—Or Hypocrites from Hell?. After initial success in raising the issue and changing behavior, the organization began to see itself as more educator to wrongdoers than protector of innocents. The attitude has become, “Welcome new drunk drivers! Please sign up for our program.”

Hispanics’ cultural preference for drinking mass quantities of alcohol guarantees a long and profitable future for MADD. (Even NPR has noted, “Latinos are responsible for a disproportionate number of DWI arrests and alcohol-related car accidents.”) A fat pipeline of diverse clients from abroad is advantageous for MADD’s bottom line.

As a result of self-interest, MADD says, “No problema” to the multi-million amnesty.

Mothers Against Drunk Driving (MADD) is refusing to fight to prevent the Senate “Gang of Eight” from allowing illegal aliens convicted of drunk driving from being granted legalized status, or amnesty.

When Judicial Watch asked a MADD spokesperson if they would stand up against provisions in the bill that allow illegal aliens convicted of drunk driving to get amnesty, and therefore keep driving on America’s roads, that spokesperson simply responded that MADD “doesn’t get involved in immigration matters.”

Judicial Watch president Tom Fitton told Breitbart News that MADD’s refusal to fight against convicted drunk drivers here is ludicrous. “We know already that Obama is releasing criminal illegal aliens onto the streets,” Fitton said in an email. “This new amnesty will further harm the public safety. In many states, a misdemeanor results in a citizen losing the right to vote. Yet under this amnesty bill, a ‘misdemeanor’ won’t stop an illegal alien from getting legal status and citizenship.”

As Watchdogwire’s Marinka Peschmann detailed in an early June article, there are provisions in the Gang of Eight bill that allow drunk driver illegal aliens to get amnesty.

“On page 608 drunk drivers are welcome too if they have only been busted three times before the Gang of Eight’s bill is enacted,” Peschmann wrote, before citing the specific section of the bill text.

“‘(J) HABITUAL DRUNK DRIVERS.—An alien convicted of 3 or more offenses on separate dates, at least 1 of which occurred after the date of the enactment of the Border Security, Economic Opportunity, and Immigration Modernization Act, related to driving under the influence or driving while intoxicated is inadmissible.’’

As Judicial Watch noted in its piece, an illegal alien in New Jersey this weekend was allegedly driving drunk and killed a man and injured his two sons with his car. “The illegal alien, Manuel Gutierrez Vazquez, did not have a valid driver’s license yet had been arrested a few weeks earlier for driving drunk in another state, according to a local news report,” Judicial Watch wrote, citing a piece from NJ.com.

A GOP senate aide told Breitbart News, too, that this provision has the potential to be even more deadly to Americans as more examples like this will likely continue happening. “One of the more astonishing features of this bill is that it provides citizenship (and immediate legal status) to illegal alien drunk drivers with criminal records – these are individuals who illegally entered the country, illegally operated motor vehicles, illegally drove that vehicle while intoxicated, and then illegally remained in the country hoping for passage of the Senate amnesty bill,” the aide said in an email. “This will almost certainly lead to avoidable loss of life.”

In addition to those concerns, law enforcement officers have expresses concerns over all the handouts for convicted criminal illegal aliens in the bill. Specifically, for instance, while testifying before the House Judiciary Committee recently, Immigration and Customs Enforcement (ICE) National Council president Chris Crane said that the Senate Gang of Eight bill “reflects an absence of law enforcement input.”

Crane, an ICE agent himself and a former marine, said the reason the Senate bill reflects the lack of law enforcement input is because “it contains no tangible plan for border security and for the most part ignores interior enforcement altogether, while simultaneously creating a path to citizenship for members of criminal street gangs as well as a majority of criminal aliens currently residing in the United States illegally.”

“In short, we are shocked by the lack of border security and interior enforcement measures as well as the level of criminality permitted by the Gang of Eight legislation,” Crane said.

A MADD spokesperson did not immediately respond to Breitbart News’ request for comment. But MADD’s website states it “is the nation’s largest nonprofit working to protect families from drunk driving.”