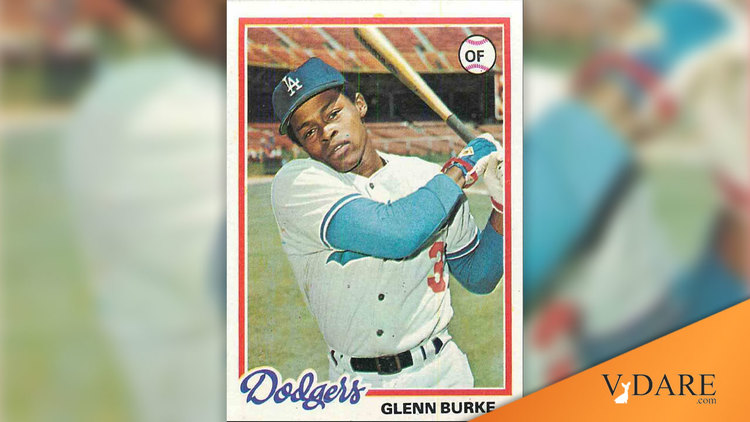 I’ve brought up these stats a million times, but what are mere baseball statistics compared to The Narrative of who and whom?

EMERYVILLE, Calif. — Glenn Burke was 27 when he walked out on Major League Baseball, his promising career as an outfielder undone mostly by the burden of being a semi-closeted gay man.

No, his baseball career was undone mostly by his being a classic “looks good in a uniform” pre-Sabermetric prospect who got plenty of opportunities. He was fast and strong but he didn’t do much to help teams win baseball games. I remember him vividly from the Dodgers’ 1977 season as a Rally Killer. It was a terrific lineup that went to the World Series, but nothing dampened ballpark excitement faster than the announcement “Now batting … Glenn Burke.” The Dodgers should have sent Burke back to the minors and used Lee Lacy more as their chief substitute outfielder.

… It was 1980, and it was more important, Burke later explained, to be himself than to be a professional baseball player.

“It’s harder to be gay in sports than anywhere else, except maybe president,” Burke said in 1982, when he came out publicly in an Inside Sports magazine story. “Baseball is probably the hardest sport of all.”

Not for a certain gay ballplayer who started in the big leagues more than a decade before Burke and finished half a decade after him. That guy didn’t look all that good in a uniform, but he could hit. And he made good decisions off the field that made him highly popular.

In the meantime, Major League Baseball is trying to ease the way for those surely to come. As part of a concerted effort to demonstrate an atmosphere of tolerance and inclusion, the league invited Burke’s family to Tuesday’s All-Star Game in Minneapolis — its first official recognition of Burke’s early role in a movement just now gaining traction across the sports landscape.

Attending the game will be Lutha Burke, one of Glenn Burke’s five surviving siblings, who cared for Burke in his final months as he withered and died from the effects of AIDs, and her daughter Alice Rose. Burke died in 1995.

… With his combination of strength and speed, one coach compared him to Willie Mays. He might have been more like Rickey Henderson, also raised in Oakland, whose Hall of Fame career began with the A’s in 1979.

Assuming Rickey never walked, didn’t hit with power, didn’t track down flyballs well, and got thrown out a lot stealing, then Glenn Burke was a lot like Ricky Henderson.

But Burke’s major league career lasted only 225 games, smattered over four seasons. He appeared in more than half of the Dodgers’ games in 1977, when they reached the World Series, mostly as a defensive replacement and pinch-hitter. He started Games 1 and 4 of the National League Championship Series against Philadelphia, and Game 1 of the World Series against the Yankees.

Fortunately, the Dodgers wised up and traded him early in the 1978 season to Oakland and went back to the World Series without him. Oakland played him quite a bit, and he was just as bad as in LA.

In 225 MLB games over four seasons, Burke was -2.4 in Wins Above Replacement — i.e., he cost his teams 2 to 3 wins versus just plugging in the average replacement level journeyman from Triple A or off the waiver wire. Burke hit .237/.270/.291 and he played below average defense as an outfielder. He stole some bases, but was thrown out over 30% of the time.

These days, with proper adjustments to his minor league stats for playing at altitude in Albuquerque, he’d never have been assumed to be a big league caliber player. At age 23 in the minors at 4,500 feet elevation, he hit .300/.321/.424, which sounds good, except that the whole Albuquerque team hit .289/.356/.422, so he was arguably a below average hitter on a Triple AAA team that went 66-78. But back then people didn’t pay much attention to on-base percentage. Burke looked like a big leaguer. But over the course of the season, you’d notice what the stats show us instantly now: he wasn’t much helping you win.

But don’t let a bunch of numbers get in the way of the received wisdom:

Few knew he was gay, but rumors percolated. Burke was wildly popular in the clubhouse, known for playing loud music, dancing and spot-on Richard Pryor imitations. He is widely credited for inventing the high-five. …

In May 1978, just as teammates began realizing that Burke was gay, he was traded to the A’s for the veteran Bill North.

The Dodgers definitely won that trade. North was 1.8 games above replacement for the Dodgers the rest of the 1978 season, while Burke was -0.6 games below replacement for the A’s. Nowadays, we have the kind of statistics to summarize the patterns it used to take fans scores of games listening to the radio to recognize. But who cares about advancements in Moneyball when advancing The Narrative.

…Back home in Oakland, Burke increasingly spent time across the Bay Bridge, in San Francisco’s Castro district, the heart of gay culture. Suspicions about his sexuality swirled. A friend tried to steer him and his story to the San Francisco Chronicle columnist Herb Caen, but Burke declined. Caen wrote only that a local ballplayer could be found on Castro Street.

Burke started regularly in the outfield for the A’s in 1978, but a pinched nerve in his neck in the 1979 season kept him off the field. He refused to take cortisone shots to get back on the field, and simply left the team. He was 26.

“I probably wouldn’t have left if there hadn’t been the other problem, the gay thing,” Burke said in the 1982 Inside Sports story. “But put it all together, and it was too much.”

He returned the next spring. The team’s new manager, Billy Martin, reportedly addressed Burke with homophobic slurs in front of teammates. A knee injury in spring training led Burke to the minor leagues. Living as a gay man in Ogden, Utah, his dream of starring in the major leagues as far away as ever, he walked away.

“The browbeating got to him,” Lutha Burke said last week. “I’m more than sure that being gay cost him his baseball career.”

Well, that and being a massive screw-up …

Burke, freed from the secret, starred in gay baseball and softball leagues and won medals at the Gay Olympics. He lived off his personality and fame. But in 1987, he was struck by a car, breaking his leg in three places. His athleticism shattered, it exacerbated a downward cycle of drugs, homelessness and crime. In 1991, he pleaded guilty to grand theft and possession of a controlled substance, and was sentenced to 16 months in prison. He was released after six months, then returned for a month because of a parole violation.

But, that’s not the point, the point is that Glenn Burke is a hero.