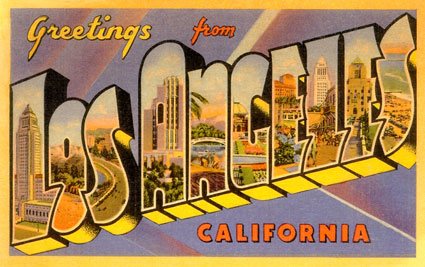 Los Angeles has been ground zero for for bearing the brunt of of immigration diversity for some time. Unlucky in geography, the county was home to 9.8 million residents as of 2010, 56.6 percent of whom over age 5 do not speak English at home according to the Census. County Supervisor Michael Antonovich has been reporting on the cost to taxpayers of illegal immigration for years, with an update a few days ago noting that $54 million in welfare benefits were issued to illegal alien parents just in the month of March in the county.

A March 2012 article in the LA Times about a new school free food program mentioned in passing that kids from low-income families make up 80 percent of the LAUSD enrollment. The place is a poverty magnet with palm trees.

Even Los Angeles liberal pols are concerned about what another massive amnesty will do to the county’s welfare spending, although they are hopeful the feds will kick in some extra cash, as was done in 1986.

With an estimated 1.1 million people in L.A. County illegally, officials fear that the county will get stuck with many costs for those who apply for citizenship.

WASHINGTON — Few regions will absorb the impact of future immigration reforms more than Los Angeles County, home to an estimated 1.1 million people in the country illegally, one-tenth of the nation’s total.

As the Senate Judiciary Committee began debating the bipartisan immigration bill last week, county officials voiced concerns that local taxpayers will be “left holding the bag” to pay for the brunt of healthcare and other services for multitudes of immigrants who apply for citizenship.

Local and state officials believe the overhaul bill will encourage those in the country illegally to come out of the shadows and turn to local services during the proposed 13-year-long pathway to citizenship.

“The one thing that’s really clear as day is that the federal government is going to be protecting itself against costs, and we’re going to be left holding the bag,” said Mark Tajima, an analyst with the county’s chief administrative office.

In Washington last week for the start of the debate, county officials, including Supervisors Don Knabe and Zev Yaroslavsky, warned of a “major cost shift” to state and local governments from the proposed legislation and pressed Congress to provide federal aid to help cover future costs.

Officials could not, however, provide a figure on the potential tab. Instead, as they made the rounds on Capitol Hill, they pointed to the $800 million the county received in the last big immigration overhaul signed by President Reagan in 1986.

Sen. Dianne Feinstein (D-Calif.), after meeting with county officials, brought up the county’s concerns at the Judiciary Committee meeting and directed her staff to look into the possibility of creating a “state impact assistance” fund, similar to the $4 billion provided to local and state governments in the 1986 bill.

Sen. Jeff Sessions (R-Ala.), a leading critic of the bill, has cited the potential costs to taxpayers in assailing the measure.

In its current form, the bill would bar most immigrants seeking legal status from receiving federal benefits, such as food stamps and Medicaid, during the years it would take to become legal residents or U.S. citizens.

The bill requires the federal government to have a plan to gain almost total control of the border, authorizing money for drones, customs officers and prosecution of illegal entries. People now in the country without legal status would be eligible for provisional status if they paid fees, fines and taxes. They could gain legal residency 10 years after the border was declared secure. After 13 years, they would be eligible for citizenship.

The National Conference of State Legislatures is urging Congress to allocate to local and state governments some of the fees paid by applicants for legalization. The legislation, however, calls for that money to be used to secure the border, a key element for Republican support.

The proposed bill also would bar most of those applicants from receiving subsidies to buy health insurance for 10 years. These subsidies, which are part of President Obama’s 2010 health law, will be available next year to millions of low- and moderate-income Americans and legal immigrants who do not get health benefits at work.

Immigrant rights advocates said that because applicants for legal status will pay taxes, they should be entitled to a safety net.

“If you give them lawful status, the hope is that they will have more opportunities to provide for themselves and their families without relying on benefits,” said Sonal Ambegaokar, health policy attorney with the National Immigration Law Center in Los Angeles. “Even hard-working Americans can’t afford basic necessities these days.”

A memo to the Board of Supervisors from a top county government affairs officer said some of the provisions of the bills “would be especially unfair because newly legalized individuals would be paying taxes, fines and fees to the federal government, but state and local governments, such as the county, would have to bear most of the cost of services provided to them.”

Although the county provides emergency care to all, regardless of legal status, county officials say the legislation could significantly increase its costs for non-emergency care. They point to an estimate that up to 446,000 of such immigrants in the county have no health insurance.

States are also concerned about how they will pay for services, including English proficiency classes sought by applicants for legal status at a time when funding for such adult school programs has been cut. Community colleges and other institutions will be flooded with demand.

“For states like California and New York, there is the potential of a lot of people coming to the state and local government for assistance,” said Sheri Steisel, senior federal affairs counsel for the National Conference of State Legislatures. “Just because the federal government has decided not to provide access to federal benefit programs does not mean that the need goes away.”

County officials want Congress to create a fund similar to the $4-billion allocation in 1986 or make applicants for legal status eligible for federal benefits sooner. Some 720,000 of the 2.7 million immigrants granted amnesty nationwide as a result of the 1986 overhaul lived in Los Angeles County.

But with Washington awash in red ink and conservative lawmakers attacking the bill’s potential costs, securing such increased spending would appear a long shot.

But Steisel is hopeful, noting: “This is now a 50-state issue…. Everybody has a stake in this.”