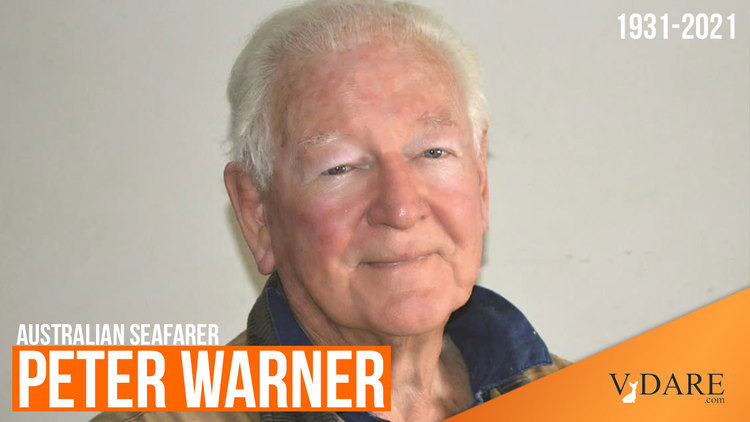 Lord Of The Wise

That story, which has sometimes been called a real-life “Lord of the Flies,” was just one episode in a life filled with adventure.

Peter Warner, an Australian seafarer whose already eventful life was made even more so in 1966 when he and his crew discovered six shipwrecked boys who had been living on an uninhabited island in the South Pacific for 15 months, died on April 13 in Ballina, New South Wales. He was 90.

Warner was the son of one of Australia’s richest men, and grew up a peer of Rupert Murdoch, who is the same age. But unlike Murdoch, he spent his adult life at sea or in the islands of the South Seas.

His death was confirmed by his daughter Janet Warner, who said he had been swept overboard by a rogue wave while sailing …

Sounds kind of like the way this adventurer wouldn’t have minded going at age 90.

Back in 1966, he’d been fishing in the Tonga islands when he saw a burned part of a supposedly uninhabited island:

As they approached, they saw a naked teenage boy rushing into the water toward them; five more quickly followed. Recalling that some island nations imprisoned convicts on islands like ‘Ata, he told his crew to load their rifles.

But when the boy, Tevita Fatai Latu, who also went by the name Stephen, reached the boat, he told Mr. Warner that he and his friends had been stranded for more than a year, living off the land and trying to signal for help from passing ships.

“After 20 minutes,” he said, “a very tearful operator came on the radio, and then amongst tears he said: ‘It’s true. These boys had been given up for dead. Funerals have been held. And now you have found them.’”

In June 1965 the boys, all students between 13 and 16 years old from a boarding school in Nuku’alofa, had stolen a 24-foot boat and gone for what was intended as a maritime joy ride.

For a three hour tour …

A few hours into their trip, though, a fierce wind broke their sail and rudder, setting them adrift for eight days.

As they later told Mr. Warner, they finally spotted ‘Ata, about 100 miles south of Tongatapu, the main island of Tonga. It had once been home to about 350 people, but in 1863 a British slave trader kidnapped about 150 of them, and the Tongan king relocated the rest to another island, where they would be protected.

At first the boys lived off raw fish, coconuts and birds’ eggs. After about three months, they found the ruins of a village, and their fortunes improved — amid the rubble they discovered a machete, domesticated taro plants and a flock of chickens descended from the ones left behind by the previous inhabitants.

It makes for a more fun castaway story (e.g., Robinson Crusoe, Swiss Family Robinson, Cast Away) when they have some random remnants of technological civilization to work with rather than have to survive like Tasmanian hunter-gatherers with just their bare hands.

They also managed to start a fire, which they kept burning for the rest of their stay.

The boys built a makeshift settlement, with a thatched-roof hut, a garden and, for recreation, a badminton court and an open-air gymnasium, complete with a bench press. One of the boys, Kolo Fekitoa, fashioned a guitar out of debris from the boat, and they began and ended every day with songs and prayer.

They established a strict duty roster, rotating among resting, gathering food and watching for ships. If a fight broke out, the antagonists had to walk to opposite ends of the island and return, ideally having cooled off. When Stephen broke his leg, the others fashioned a splint; his leg healed perfectly.

I’ve never read William Golding’s Lord of the Flies. My guess is that teachers assign it because A) It holds boys’ attention, and B) It gets across the message: Without my guidance, you little stinkers would be doomed.

At the same time, sci-fi writer Robert Heinlein wrote one of his best young adult novels Tunnel in the Sky about teenagers who get stranded on an unknown planet (with roughly the ecology of safari country in East Africa). Unlike in Lord of the Flies, but like the Tongan boys in real life, after a lot of initial troubles, they make a pretty good go of it.