London Times (And Mexican Commenters) On the Mexican Flu

The foreign press seems to be taking the swine flu outbreak somewhat more seriously than Washington. The story below is from the Times of London.

Doctors in America are advising worried patients to buy painters’ masks as a precaution against the global outbreak of swine flu that appears to have spread from Mexico to the United States, New Zealand and possibly Europe.

With the worldwide death toll standing at about 81 and with about 1,300 people infected, authorities across the globe are torn between the desire to slow down a potential flu pandemic and the need to avoid bringing major cities on every continent to an economic standstill.

As of today, the US was still allowing people to cross the border from Mexico — where it is thought the swine flu emerged last week — although customs officials at the San Ysidro and Otay Mesa border crossings were given protective masks. It is thought that eight people in US border towns have gone down with swine flu, and tonight Mayor Michael Bloomberg said that a further eight cases have been confirmed among students in New York. Americans told to wear masks as swine flu spreads round globe , April 26, 2009

Not every flare-up of the flu is destined to become a pandemic killer of millions — although experts say the Mexico City strain could be one — and I sympathize with public health officials who have to make difficult decisions.

That said, I don't think Washington would shut down the Mexican border for any reason. Hundreds, perhaps thousands of American citizens are killed yearly by illegal alien Mexicans and those victims are considered by elites to be the acceptable cost of the globalized economy. Nothing changed in immigration policy after 9/11 when 3,000 died in an hour. So don't expect a few germs to alter the Potemkin village that stands for national security these days. DHS is not even testing travelers from Mexico for the virus even though the government has declared a public health emergency.

The BBC has a page of reader responses to the medical alert, Mexico flu: Your experiences, some of which are rather alarming.

I'm a specialist doctor in respiratory diseases and intensive care at the Mexican National Institute of Health. There is a severe emergency over the swine flu here. More and more patients are being admitted to the intensive care unit. Despite the heroic efforts of all staff (doctors, nurses, specialists, etc) patients continue to inevitably die. The truth is that anti-viral treatments and vaccines are not expected to have any effect, even at high doses. It is a great fear among the staff. The infection risk is very high among the doctors and health staff. There is a sense of chaos in the other hospitals and we do not know what to do. Staff are starting to leave and many are opting to retire or apply for holidays. The truth is that mortality is even higher than what is being reported by the authorities, at least in the hospital where I work it. It is killing three to four patients daily, and it has been going on for more than three weeks. It is a shame and there is great fear here. Increasingly younger patients aged 20 to 30 years are dying before our helpless eyes and there is great sadness among health professionals here. Antonio Chavez, Mexico City

I work as a resident doctor in one of the biggest hospitals in Mexico City and sadly, the situation is far from "under control". As a doctor, I realise that the media does not report the truth. Authorities distributed vaccines among all the medical personnel with no results, because two of my partners who worked in this hospital (interns) were killed by this new virus in less than six days even though they were vaccinated as all of us were. The official number of deaths is 20, nevertheless, the true number of victims are more than 200. I understand that we must avoid to panic, but telling the truth it might be better now to prevent and avoid more deaths. Yeny Gregorio D??vila, Mexico City 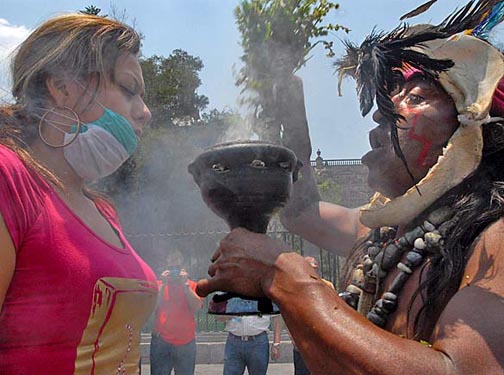