In Britain, hostile Muslims made it abundantly clear that they don’t want to assimilate to the basic western principle of free speech, an integral part of representative government. An estimated ten thousand staged a protest against the Google office in Londonistan because the company owns Youtube which continues to to host a disliked video considered to be anti-Islam. 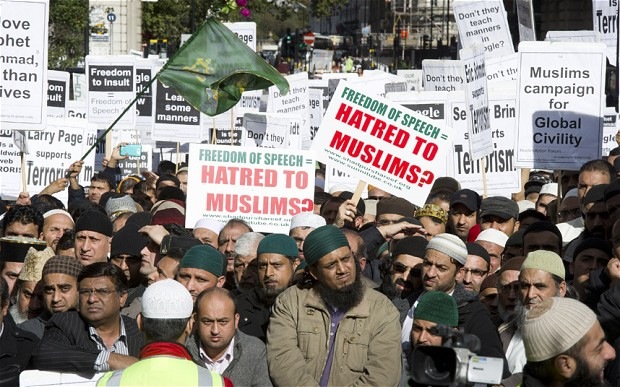 The complaints against the internet search engine are somewhat ironic, since many wanna-be jihadists have likely used Google to find bomb-making instructions or supplies. Some killers-for-Allah have self-radicalized using the internet, like Brooklyn high-school dropout Betim Kaziu who plotted to murder American soldiers and illegal alien aspiring Capitol bomber Amine El Khalifi. The web is huge part of the modern jihad against western civilization, and Google is a central component of the internet.

Great Britain used to be a more civilized place before they started the diverse immigration of Muslims. America will see the same sort of behavior if Muslim immigration is allowed to continue here.

Thousands of Muslims have pledged a series of protests against Google HQ for a “hateful and offensive” anti-Islam video, saying they now live in an “age of mockery”.

A protest by 10,000 Muslims outside the offices of Google in London today is just the first in an orchestrated attempt to force the company to remove an anti-Islamic film from website YouTube in Britain.

Thousands had travelled from as far afield as Glasgow to take part in the demonstration, ahead of a planned million-strong march in Hyde Park in coming weeks.

Anger over ‘The Innocence of Muslims’, an American-produced film which insults the Prophet Mohammad and demeans Muslims, according to protesters, remains available to watch on the website YouTube, a subsidiary of Google.

Organiser Masoud Alam said: “Our next protest will be at the offices of Google and YouTube across the world. We are looking to ban this film.

“This is not freedom of expression, there is a limit for that. This insult of the Prophet will not be allowed.

The group’s next action was a march Mr Alam hoped would be “a million strong” would take place in Hyde Park “in the next few weeks”, he said.

“Until it is banned we will keep protesting,” he added.

Today’s demonstration was the third organised in a month, and took place on the central London street where the website search giant has its UK headquarters. A demonstration outside the American Embassy in London last month drew little attention as protests in Libya, Tunisia and Yemen dominated headlines, including the storming of embassy in Benghazi, Libya, that led to the death of the US Ambassador to Libya, Christopher Stevens.

Barricades were erected in front of Google’s headquarters and a crowd bearing placards with the words “We love our prophet more than our lives” and “Prophet Muhammad is the founder of freedom of speech” had amassed by lunchtime.

Speeches by more than a dozen imams in a mixture of Arabic, Urdu, and English urged Muslims to honour the name of the Prophet and not to back down in the face of Google’s continuing reluctance to act, and were met with passionate cries of “God is Great” and “Mohammad is the Prophet of God” in Arabic.

One of the speakers, Sheikh Faiz Al-Aqtab Siddiqui, told The Daily Telegraph: “Terrorism is not just people who kill human bodies, but who kill human feelings as well. The makers of this film have terrorised 1.6 billion people.

“Organisations like Google are key players and have to take responsibility for civility. You can’t just say it doesn’t matter that it’s freedom of speech. It’s anarchy.”

Sheikh Siddiqui, a barrister from Nuneaton, said he wanted to form a coalition with the Church of England, Catholics, Jewish groups, Trade Unions and even Conservatives to encourage their ranks to join his “campaign for civility”.

“We want everyone in society to recognise these people are wrecking our fragile global society. We want the Church, the Synod, Jewish groups and establishment figures involved,” he said.

As many as 800 imams in mosques across Britain helped to organise today’s protest, which lasted four hours and blocked roads almost up to the Queen’s doorstep on Buckingham Palace Road.

Muslims from Blackburn, Birmingham, Glasgow, Luton, Manchester and Peterborough were in attendance. When asked where where the women attending the protest were, one protester replied: “Right at the back”.

Self-employed businessman Ahmed Nasar said he was worried the video could lead to violence in Britain in the same way as it had abroad. “If you push people too far,” he said, “You will turn the peaceful elements into violence.”

A YouTube spokesperson said: “We work hard to create a community everyone can enjoy and which also enables people to express different opinions.

“This can be a challenge because what’s OK in one country can be offensive elsewhere. This video – which is widely available on the Web – is clearly within our guidelines and so will stay on YouTube.”