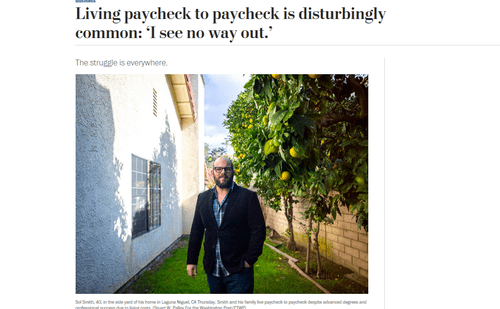 Outside elite circles, many ordinary American families are living paycheck to paycheck.  I know my family does.  Now, even the Washington Post discovers this fact.

So why do we need to import more cheap labor?

What do professors, real estate agents, farmers, business executives, computer programmers and store clerks have in common?   They’re not immune to the harsh reality of living paycheck to paycheck, according to dozens of people who responded to a Washington Post inquiry on Twitter.  They’re millennials, Gen Xers and baby boomers. They work in big cities and rural towns. They’ve tried to save — but rent, child care, student loans and medical bills get in the way.  National data on the paycheck-to-paycheck experience is flimsy, but a recent report from the Federal Reserve spotlights the prevalence of extra-tight budgets: Four in 10 adults say they couldn’t produce $400 in an emergency without sliding into debt or selling something, according to the 2017 figures.
Living paycheck to paycheck is disturbingly common: “I see no way out.”
by Danielle Paquette, Washington Post, December 28, 2018

Wow, you'd think that a political party could make a major issue out of this, and build its platform around it.   It might actually pay off at election time.

The partial government shutdown, which began last Friday and is temporarily halting pay for some 800,000 federal workers, has touched off a heated discussion on Twitter about what it means to get by in the United States. (President Trump warned this closure could “last a very long time” if Congress doesn’t meet his demands for billions of dollars for a border wall.)

Even brief income lapses can spell disaster for some households.

“My husband is a Park Ranger in the Great Smoky Mountains National Park, and he had to sign his furlough papers,” one woman tweeted. ”We have a 4 yr. old and a 4-month-old, and we don’t know when his next check will come. Mortgage is due, Christmas 2 days away.”

“Broke my lease to accept new fed job for which I have to attend 7 months of training in another state,” another Twitter user said. (He later deleted the tweet). “Training canceled with shutdown. Homeless. Can’t afford short(?)-term housing/have to work full-time for no pay/returning Christmas presents.”

These and other #ShutdownStories took off online after U.S. Rep. Scott Perry (R-Pa.) suggested last week that a gap in wages wouldn’t be so bad.

“Who’s living that they’re not going to make it to the next paycheck?” he asked reporters, adding that most of those impacted would qualify for back pay.

“It’s astronomical what people need just to make it month to month,” said Heidi Shierholz, a former chief economist at the Department of Labor who now studies how middle-class families spend their wages at the Economic Policy Institute, a Washington think tank that is funded by foundations and unions. “Given the high cost of transportation, housing, health care … There is often no wriggle room."

Some of those affected by the shutdown can't even expect to get paid.

About 2,000 custodians, security guards, housekeepers and other federal building workers are losing money this holiday season because of the shutdown, according to 32BJ SEIU, an East Coast labor union — and because such staffers are employed by contractors, they won’t be eligible for makeup checks.  “My supervisor told me we won’t be getting paid,” one State Department cleaner told The Post last week, “so my bills won’t be getting paid.”

Is having a lot of college education the answer?  Not necessarily.

Beyond the federal labor sphere, workers across a variety of professions struggle to make ends meet.  Sol Smith, chair of liberal arts at a Southern California college, said he landed his job after earning three degrees. But with four daughters and mounting health care costs, he said, saving just isn’t possible.  “I see no way out,” he wrote in an email to The Post. “I am 40, have built a strong career, have 17 years experience, and if something were to happen to me, my wife and kids would be homeless within a year when my life insurance ran out.”

Aren't we now in the "information age"?  So people working with computers should be fine, right?  Not necessarily.

Lani Harrison, 43, said she and her software engineer husband have trouble buying groceries after paying the $2,249 rent on their two-bedroom Los Angeles apartment. They’re raising three young kids and rely on her husband’s income, she said. Her work as a certified car seat installer earns her $40 per appointment, but the work isn’t steady.

“Each month, we have to stretch his paycheck to make things work,” she said. “We really don’t have any savings. Many months we go under.”

Sometimes, she confides in trusted friends.

“I’m often surprised that their stories are so similar to ours,” she said.

It's hard to save when there are so many expenses.

Dillon Holt, a housekeeping assistant at a Nashville hotel, said he’s down to one piece of chicken in his freezer. His checking account often hovers around zero, and he is unable to put away any money for the future or an emergency.

Those student loans are burdens to many.

Emily Webb, 38, said she works full time as an arts administrator in Columbus, Ohio, and waits tables on the side. Staying afloat each month, she said, is a precarious dance.

“It’s a scramble at the end of a paycheck to deposit my tips and make sure none of my automatic payments bounce,” said Webb, who has master’s degree but cannot make her student loan payments.

She’s grateful to work in her field, though, and loves her job. One big financial boost, she said, awaits her at the end of 2019.

“I can finally pay off my 9-year-old car,” Webb said. “The plastic part of the back bumper was slowly sliding off the back of it. I got rear-ended by an uninsured driver 2 years ago, so I reattached it with zip ties.”

Do Central American illegals have a right to the "American Dream" when many Americans themselves don't?

Aren't our leaders supposed to be looking out for Americans?