The self-proclaimed Mayor of Realville has been painfully slow among radio conservative talkers to see the big picture of immigration’s threat to America. While an insightful commenter on some aspects of politics, he avoided the subject of foreign culture overload for far too long. One symptom was Limbaugh’s credulous crush on amnesty quisling Marco Rubio which suggested a curious sentimentality on the central issue. Plus, when he launched his series of books aimed at teaching kids about American history, he also published the books in Spanish — unclear on the subject of assimilation I would say.

So it’s noteworthy that on Friday’s program he examined a recent Pew paper and was more honest than he generally gets about immigration’s long-term weakening of the America’s culture of freedom. At the heart is the influx of left-leaning immigrants whose preference for big government with “a generous safety net” lasts through generations of residing in the United States, as shown by a graph from a 2012 Pew poll:

The current report is a brief series of charts that nevertheless pack a lot of information: 10 demographic trends that are shaping the U.S. and the world (March 31, 2016).

The chart below is first and is the headliner, containing the essence of demographic change as caused by immigration: 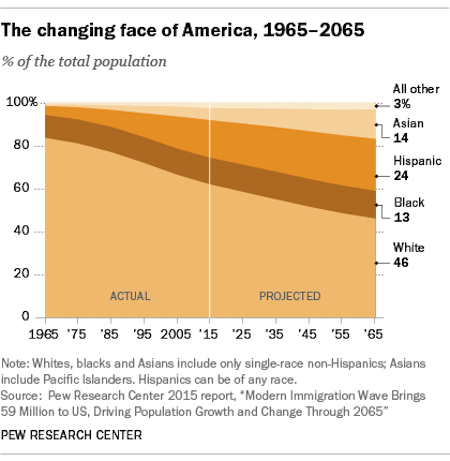 The text version below is from the Limbaugh archive:

RUSH: Okay. The Pew Research Center for the People & the Press put out this massive research product recently: “10 Demographic Trends That Are Shaping the US and the World,” and, if you go into reading these with any kind of a pessimistic attitude, you would be totally within your logical bounds to conclude that the country’s done, as you’ve known it.

There’s always gonna be an America. But it increasingly looks like it will be less and less like the America that was founded. There will always be a United States, we think. It starts out this way. “Americans are more racially and ethnically diverse than in the past, and the US is projected to be even more diverse in the coming decades. By 2055, the US will not have a single racial or ethnic majority. Much of this change has been (and will be) driven by immigration.”

Can I sum this up for you? What you’re gonna hear here, I’m gonna tell you why all of this happened. The Great Society of LBJ in 1964 coincides with Ted Kennedy demanding that immigration be reinstituted in 1965. And I am here to tell you that the problems we face today are the direct result of the Great Society being used to hide massive numbers of illegal immigration. The Great Society, of course, was founded with great compassion. It was founded, part of it, the War on Poverty. Part of it was to end the great disparities that existed economically from both groups of people, classes of people, what have you.

And of course its objectives were powerful wonderful. Oh, my goodness, so much class and so many good intentions and so much compassion. And it was all about government picking winners and losers. It set the table for affirmative action. It set the table for pretty much every destructive thing the left has come up with. The Great Society, which of course was a perverted belief that government could be the sole architect of an acceptable good and fair and just society.

And of course the premise under which it took place was that America was not good and was not nice and was not fair and only the government of Lyndon Baines Johnson would be able to fix this. So they come up with a Great Society, which a lot of people instinctively supported, “Oh, it sounds so wonderful, oh, my God, it’s just so wonderful.” And while all this is going on, illegal immigration began in droves, and it was basically hidden. What was going on in immigration happened out of sight.

Now, Pew doesn’t say any of this. Pew just talks about all this as just an act of God. This is just normal human evolution, that the racial and ethnic and religious and other demographic shifts, why, they’re just happening. No. They’re not just happening. They’re the result of policy. They’re the result of purposeful, objective policy put together by leftists. So again, by 2055, the US will not have a single racial or ethnic majority. And some people, “That would be wonderful, Mr. Limbaugh, that would be absolutely wonderful, then nobody would have an unfair advantage over anybody. Is that what you’re saying?” No, that’s not what we’re saying. It means bye-bye dominant culture. It means bye-bye distinct American culture. It means bye-bye what we all grew up in.

“Nearly 59 million immigrants have arrived in the US in the past 50 years, mostly from Latin America and Asia.” They don’t tell you how many are illegal. And then they don’t tell you about further results such as birth of illegal immigrants in America, the children of illegal immigrants. “Today, a near-record 14% of the country’s population is foreign born compared with just 5% in 1965.”

Item number two. Asia has replaced Latin America (including Mexico) as the biggest source of new immigrants to the US In a reversal of one of the largest mass migrations in modern history, net migration flows from Mexico to the US turned negative between 2009 and 2014.” But that’s because the economy plunged, there was less reason to come, and the inflow was mitigated by people leaving and going home, until they found it was time to return.

Anyway, number three. “America’s demographic changes are shifting the electorate — and American politics. The 2016 electorate will be the most diverse in US history due to strong growth among Hispanic eligible voters, particularly US-born youth.”

Number four. “Millennials, young adults born after 1980, are the new generation to watch. They have likely surpassed Baby Boomers (born 1946-1964) as the largest US generation and differ significantly from their elders in many ways. They are the most racially diverse generation in American history: 43% of Millennial adults are non-white, the highest share of any generation. And while they are on track to be the most educated generation to date, this achievement has come at a cost: Many Millennials are struggling with student debt.”

Exactly what I’ve been saying. They have destroyed the entire advantage and purpose of a college education by making it a millstone. You graduate with insurmountable debt. You cannot get ahead. You remain dependent on government, which now controls your student loan, by the way.

And of course the Pew Research Center, while claiming that this is the most educated generation in recent years to date, they don’t say educated with what and by whom. They don’t at all get into just what is it these young Millennials know. Do they know, for example, the Constitution was written to limit government?

All you have to do is read — take your pick. There’s some exceptions, of course. But read things written by Millennials, and without fail almost, every Republican referred to is either a joke or a pig or a racist or dangerous, certainly not somebody to be respected or taken seriously, and that is a product of education. They don’t even know what they’re saying. They’re just regurgitating the crap that they have heard, been educated with, taught, what have you.

Number five. “Women’s role in the labor force and leadership positions has grown dramatically. The labor force participation rate for American women has risen steadily since the 1960s. In fact, mothers were the sole or primary breadwinner in a record 40% of all households with children in 2011.”

Mothers were the sole or primary breadwinner in a record 40% of all households. “What is what’s wrong with that, Rush?” If you do not understand the dramatic, significant change this represents, and how it advantages liberalism in the Democrat Party — that’s all I’m saying here. You can argue whether this stuff good or bad. Remember, everything here happens under the premise that these people have got to be stopped politically. You can’t deny what is happening to our country. You can’t deny these dramatic attacks, assaults, on the very fundamental building blocks of this country.

Number six. “The American family is changing. After decades of declining marriage rates, the share of American adults who have never been married is at an historic high.” A lot of them have kids. “Two-parent households are on the decline in the US, while divorce, remarriage and cohabitation are on the rise. About one-in-six American kids now live in a blended family. And the roles of mothers and fathers are converging, due in part to the rise of breadwinner moms. Dads are doing more housework and child care, while moms are doing more paid work outside the home.”

Number seven. “The share of Americans who live in middle class households is shrinking,” and that is really all you need to know about the future of economic growth, the potential for it, and the viability of the American dream. Which really was never a house. I mean, that was a symbol. The American dream, the American exceptionalism, the one place in the world, one place in the history of humanity where average, ordinary, everyday middle-class people had all kinds of opportunity to move up, to educate themselves, to earn more money, have a higher standard of living for themselves and their family.

Now even the quest for that is condemned as selfish and materialistic and so forth, but traditionally this is what people wanted. It was always for the betterment of their children. It was always to improve the lives of their kids. Everybody wanted their lives to have better lives than they did. And that was just. It was considered decent and good. Now it’s not. Now it’s selfish, it’s greedy. Now it’s not realizing daily realities that not everybody can. Now we’ve all gotta know our place. You gotta realize your lot in life may be where you’re born. No, no. That’s always the way it was everywhere else in the world.

Number eight. “Christians are declining as a share of the US population, and the number of US adults who do not identify with any organized religion has grown.”

Number nine. “The world’s religious makeup will look a lot different by 2050.” I don’t have time for the details for this. We’ll post the link to this piece at RushLimbaugh.com.

RUSH: We will post, we’ll link to that Pew Research Center on the demographic shifts in the country. You go through that, each of these points, there’s much data included I didn’t share with you, didn’t read, it would take too much time. But apply it to whatever issues are happening, like the bathroom law in North Carolina or the religious freedom laws in Indiana or Georgia, apply this demographic stuff that you see in this story with all these so-called controversial things happening.

These bathroom laws are absurd! And people who haven’t even read this legislation are coming out totally in support of it, which basically lets anybody use whatever bathroom they want to use based on how they want to present that day. You’ll understand how all this is happening. And folks, it is imperative that Hillary Clinton not be elected. We have to stop it first before there can be any reversal and advancement.