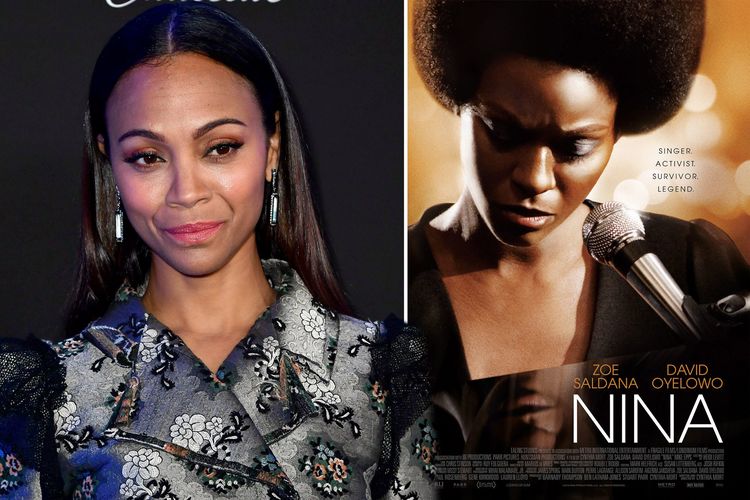 In the digital age Hollywood casting decisions leaked from behind closed doors can instantly become fodder for public debate. And when the decision involves race and celebrity, the debate can get very heated.

The online media world has been abuzz with criticism for nearly a month now over the news — first reported by The Hollywood Reporter — that the actress Zoe Saldana would be cast as the singer Nina Simone in the forthcoming film “Nina” based on her life.

Zoe Saldana was the princess in "Avatar." She did a fine job under what must have been stressful conditions, with weird new 3D sensors strapped all around her. My favorite Zoe Saldana story I like to imagine went something like this:

James Cameron: Zoe, you know how you've been preparing for months to play a robot in my upcoming movie? Well, I'm not going to make that movie.

Cameron: Instead, I'm going to make a movie called "Avatar" and youare going to play the romantic lead, a beautiful princess!

Zoe: I've always wanted to play a princess since I was a little girl!

Few have attacked Ms. Saldana for her virtues as an actress. Instead, much of the reaction has focused on whether Ms. Saldana was cast because she, unlike Simone, is light skinned and therefore a more palatable choice for the Hollywood film than a darker skinned actress.

Saldana is from the Dominican Republic. I doubt if she's considered black there, but she's normally considered black here under the currently reigning one-drop rule. She's a lot blacker looking than, say, Anatole Broyard was.

“Hollywood and the media have a tendency to whitewash and lightwash a lot of stories, particularly when black actresses are concerned,” said Tiffani Jones, the founder of the blog Coffee Rhetoric. Ms. Jones wrote a blog post titled “(Mis)Casting Call: The Erasure of Nina Simone’s Image.”

“When is it going to be O.K. to not be the delicate looking ideal of what the media considers blackness to be?” Ms. Jones said in an interview.

Ms. Jones’s post linked to an online petition at the Web site Change.org that calls for Cynthia Mort, the writer and director of the film, and Jimmy Iovine, executive producer, to “replace Zoe Saldana with an actress who actually looks like Nina Simone.” The petition had gathered more than 2,100 supporters as of Wednesday morning.

... But the proposed choice of Ms. Saldana to play Simone has reignited the conversation of colorism — Alice Walker’s term for discrimination based on gradations of skin color.

Recently an online petition was circulated to protest the casting of the light-skinned actress Thandie Newton in the film based on Ngozi Adichie’s novel “Half of a Yellow Sun,” which centers on the Nigerian Civil War (1967-70); there was some criticism of the casting of the biracial Jaqueline Fleming as Harriet Tubman in the film “Abraham Lincoln: Vampire Hunter.”

If you can't trust "Abraham Lincoln: Vampire Hunter" to get the historical details right, what can you trust?

... Casting an actress who does not look like Simone is troubling, said Yaba Blay, a scholar of African and diaspora studies and the author of a forthcoming book called "(1)ne Drop: Conversations on Skin Color, Race, and Identity.”

(1)ne Drop: A profusion of punctuation marks is the secret fraternity handshake of postmodernist academics. The titles of Toni Morison's nonfiction, like Race-ing Justice, En-Gender-ing Power, are full of them.

“The power of her aesthetics was part of her power,” Dr. Blay said. “This was a woman who prevailed and triumphed despite her aesthetic.” Dark-skinned actresses, she added, are “already erased from the media, especially in the role of the ‘it girl’ or the love interest.”

Vic Bulluck, the executive director of the N.A.A.C.P Hollywood Bureau, believes the issue is the director, not the proposed star.

Well played, Vic, considering that your boss at the National Association for the Advancement of Certain People, Benjamin Jealous, looks kind of like Vince Vaughn. Make a fuss instead about the filmmaker being white.

We're always told that the Republican Party is doomed because demographic change is giving the Democrats an unbeatable alliance of People of Color and enlightened others. But, is this truly a naturally cohesive coalition? Or can it only be held together by whipping up ever greater anti-whiteism?