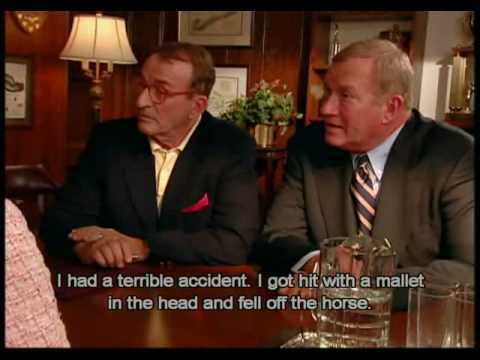 Commenter Syon (on Unz.com) points out these two clips from an HBO Curb Your Enthusiasm episode.

First, Larry and his best friend Jeff get kicked out of their Jewish country club for some Seinfeldian infraction, which dismays their tennis-playing wives. Larry’s shiksa wife Cheryl points out that she’s gone along with their [Jewish] social set for all these years, but maybe now they should apply for membership at the [gentile] Beverly Park Country Club (i.e. the Los Angeles CC). Jeff’s Jewish wife Suzie (an amazing NSFW character) is incredulous that Larry imagines he could ever act “gentiley” enough to get through the interview.

Next, Larry and Cheryl meet with two polite LACC officials:

Interestingly, the sticking point (besides all the lies Larry has told about driving a Hummer, fundraising for Reagan, playing polo, and captaining a schooner) looks like it’s going to be LACC’s hyper-Scottish insistence that golfers walk (at least on the great North course) rather than ride in a motorized cart.

My general point in my revisionist history of country club discrimination in Taki’s Magazine is that different kinds of people set up different clubs because they have different interests and personalities and then they further socially construct separate cultures in which they each feel — to use that all-powerful word of 2014 — comfortable.

Amiable Jeff could probably get along with most people most places, but he doesn’t see the point of having to walk 18 holes like he’s supposed to be the great-grandson of Old Tom Morris. Jeff’s wife Suzie, however, is an acquired taste.

Los Angeles CC and Hillcrest CC might be the richest two groups of people in Los Angeles, and they evidently have different priorities involving how important their golf courses are to them. As far as I can tell, both groups have been rapturously happy for the last 90 years with their own country clubs each arranged the way they prefer. The conventional wisdom that it’s only Group A’s irrational hatred for Group B that keeps the two clubs from being mixed 50-50 (rather than about 95-5 and 5-95) is, shall we say, tendentious.

Actually, although the Playboy Mansion is directly behind the LACC’s 13th green, in real life Larry probably wouldn’t bother even trying to get in because LACC has had a general policy of not having anything to do with show biz people. (There have been a handful of exceptions such as the application in 1989 of an older gentleman who, admittedly, had started out as an actor, but then he became President.)

As Suzie says, LACC has some number of Jewish members — I was friends with a nice kid from Beverly Hills High School’s all-Jewish debate squad back in 1973-74 and his dad was an LACC member. But the membership is extremely low profile. A tech millionaire friend who tried to get in was informed by the guy he had lunch with that the small number of new members tend to be corporate lawyers.

As America becomes more unequal, most average country clubs are in decline these days. But the super-elite clubs are doing fine. LACC, for instance, just restored its North Course back to its 1929 peak.

The Los Angeles CC is an astonishing piece of property, taking up 0.9 miles of frontage on both sides of Wilshire Boulevard between Beverly Hills to the east, Century City to the south, Westwood to the west, and Bel Air to the north. A back of an envelope calculation in this article suggests its 313 acres could sell for $19.5 billion. LACC only pays about $200,000 in property taxes annually, while Hillcrest, which only has one course, pays about $100,000.

I had lunch once with a golf course owner who told me his father had been the leader of Brentwood Country Club. In the early 1960s, his father had teamed up with Bob Hope and others to push through a ballot initiative so that country clubs wouldn’t be assessed for property taxes at their “highest and best use” (e.g., condos). The poor man was building an oceanfront Pete Dye golf course on clifftop family property in Pacific Palisades, but his 18th hole had slid halfway down to the beach. Eventually, he and his brother ran out of money fixing the 18th hole and had to sell the golf course to Donald Trump.

Here’s an article from the Hollywood Reporter on the various entertainment industry golf clubs (i.e., not LACC). The article’s picture depicts Richard Kind (who once kindly helped me look for a putter I had lost at Robinson Ranch), Super Dave Einstein (Albert Brooks’ brother — yes, Brooks’ real name is Albert Einstein), Jeff Garlin, and Larry David.

Larry plays to an admirable 11 handicap at Riviera in Pacific Palisades. It’s a great old George C. Thomas course from the 1920s that hosts the pro tournament every winter. Riviera is famously not very clubby — rather than the members owning the club, it’s owned (I believe) by a Japanese corporation as a profit-making enterprise, which is one reason the USGA hasn’t gone back to Riviera to hold a U.S. Open since Ben Hogan won there in 1948. If you are willing to pay enough, you can probably find a way to play Riviera on a weekday without knowing a member, and if you are willing to pay enough you can probably join. So, it has a more diverse membership (e.g., Johnny Mathis). But Riviera did kick out O.J. in 1995.

The USGA desperately wants to hold another US Open in the huge Los Angeles market. They recently convinced their long-time first choice LACC to hold the 2023 Open. Hosting the US Open is the highest honor a golf course can enjoy in American golf. But LACC had long been one of those handful of out-of-sight elite clubs, like San Francisco GC, that felt that holding an Open would be a hassle they don’t need and would bring attention they don’t want.

I’m not sure why they changed their minds. But, I have this vague impression that the U.S. Open is turning into a sort of ethnic pride parade for WASPs. Perhaps since the Tiger Woods scandal of 2009, the high muckety-mucks of golf have started to lose interest in their long strategy of trying to expand the demographic appeal of the game and are starting to do things that they feel are part of their cultural tradition, such as playing the U.S. Open last summer on a half-brown Pinehurst, much to the disgust of Donald Trump, who knows a fair amount about what the masses like.