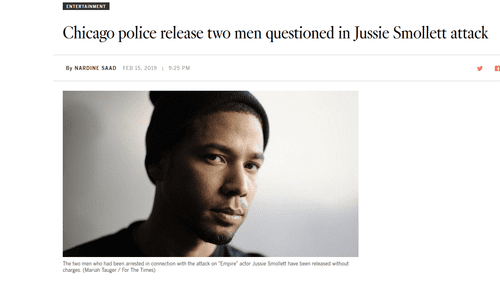 LA Times: "Chicago Police ... Say Attack Was Not a Hoax"

From the Los Angeles Times today:

Chicago police arrest two men in Jussie Smollett case and say attack was not a hoax
By NARDINE SAAD
FEB 15, 2019 | 9:00 AM

“Interrogations will resume today with the two individuals and their attorney,” department spokesman Anthony Guglielmi said in a statement to The Times on Friday.

The men — who are only being identified as two Nigerian brothers — were initially being questioned as persons of interest in the attack and are now considered potential suspects, Guglielmi said. ….

Guglielmi again denied reports alleging that the attack was a hoax and reiterated that Smollett is being treated as a victim.

“While we haven’t found any video documenting the alleged attack, there is no evidence to say that this is a hoax,” Guglielmi said. “The alleged victim is being cooperative at this time and continues to be treated as a victim, not a suspect.”

Okay, I imagine what’s going on is that the cops are telling the two Nigerian bodybuilder pals of Smollett that Smollett swore out a criminal complaint, so if stay dummied up, then he’s telling the truth, so they are criminals. But … if they want to testify against Smollett that it was a hoax and they were just helping him out, well then Smollett is the criminal.

But when the media report this stuff with a straight face, it helps postpone the Day of Reckoning for the phenomenon of the Hate Hoax.

To be thorough: I’m trying to think through the possibilities that the Nigerians initiated a crime without Smollett’s awareness.

But still, it was the night of the heavily advertised Polar Vortex. A lot of these things could wait. A preplanned Hate Hoax, however, is better on a night when nobody else is out on the street.