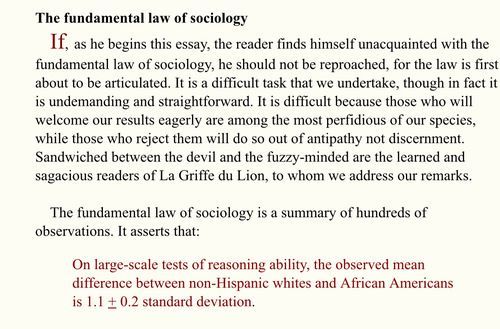 I was pleased to receive an email from the Zorro of statisticians, the mysterious La Griffe du Lion. He wants to point out that the Fundamental Constant of Sociology applies even more closely to the FDNY test data than I made it appear:

In your fine article, Professor Gates, Officer Crowley, President Obama–And the New York Fire Department, you illustrate the fundamental constant of sociology using data from the FDNY exams. Your calculation assumes normal distributions with equal standard deviations for each group. (I have often uses these same assumptions.) For most cases they work well.

But on heavily g-loaded tests, the black distribution is usually a bit narrower, being roughly 90% that of the white. We can mostly ignore this difference. But in the tails, e.g., where say 97% of one group passes, the width disparity can be important.

I repeated your calculation with and without accounting for the disparate distribution widths:

For the case where whites and blacks pass at 89.9% and 60.3%, respectively, as on the 1999 FDNY test [when an 85% score was required to pass], the calculated black and white means are separated by 1.01 SD for equal-width distributions and 1.04 (white SDs) when different widths are factored in—hardly worth the effort.

But for the case where whites and blacks pass at 97.2% and 85.4%, respectively [on the 2002 test when the passing score was lowered to 70% to satisfy the EEOC's Four-Fifth's Rule], the calculated black and white means are separated by 0.86 SD for equal-width distributions and 0.96 (white SDs) when different widths are factored in.

Thus the fundamental constant is somewhat more robust than might at first appear using the simpler calculation.