July 4th was the tenth anniversary of the LAX terrorist attack by Egyptian Hesham Mohamed Hadayet who wanted to end his failure of a life in a blaze of jihadist murders, an event which was recalled on Los Angeles television. 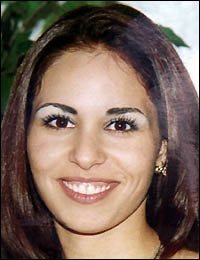 There were many disturbing aspects to this case, in addition to the murder of Yaakov Aminov, a father of eight, and Victoria Hen (pictured), a young ticket agent whose boyfriend planned to propose the next day.

The FBI apparently did not want to admit that an act of terrorism had occurred in a major American airport in which six people were shot. It was two months later when the agency admitted that the shootings were a terrorist act.

Hadayet was an illegal alien who had overstayed his visa and faced deportation, but got lucky when his wife won a diversity visa, which demonstrates perfectly what a twisted crap shoot even “legal” immigration is.

On the cultural front, then-Governor Gray Davis’ remarks about the LAX shooting expressed his belief that Independence Day was actually a celebration of diversity:

[. . .] Upon hearing the news of the attack, Gov. Gray Davis remarked: “Like all Californians, I am outraged and deeply saddened to learn of today’s shooting…. That it happened on the day on which we honor what America stands for–liberty, security and diversity–makes this particularly more tragic.” [. . .]

Have we as a nation learned anything in the last ten years? I think so, but mostly in spite of the media rather than because of its reporting, which is still dangerously PC despite the growing pile of dead bodies.

Continued jihadist attacks by hostile Muslims have shown Americans that Islam is not your normal religion that teaches peace and brotherly love, but is instead a supremacist political ideology bent on world domination.

Polls show an increasing level of discomfort with Muslims among us. A Rasmussen poll from March 2011 found that 57 percent of voters do not believe that Muslims residing in this country speak out enough against terrorism. Pew determined that the public’s favorable view of Islam fell 11 points from 2005 to 2010, from 41 percent to 30.

Back to today, ten years have not begun to heal the broken hearts of Victoria Hen’s parents, nor convinced them to believe the official story.

In the Tom Bradley International Terminal at LAX, passengers bustle under tight security, watched on camera and by armed officers. It’s the new normal in the wake of the 9/11 attacks and the shooting that happened at the El Al Airline counter on July 4, 2002.

Vicky Hen, a ticket agent for the Israeli airline, was shot and killed, along with a traveler, 46-year-old Yaakov Aminov, a father of eight. Four others were wounded before an El Al air marshal shot 41-year-old Hesham Mohamed Hadayet, an Egyptian national living in Irvine.

An FBI investigation found that Hadayet’s limo business was failing, his wife had left him, and July 4 was his birthday. Yet a year later, after an international investigation, the act was determined to fit the definition of terrorism. According to the FBI, Hadayet wanted to die as a martyr.

Today, Hen’s family and their supporters believe there’s a cover-up, and that the FBI knew more about Hadayet, but failed to act.

“The government, they knew about him, he’s a terrorist guy, and they never stopped him,” said Hen’s father Avi Hen.

The FBI responded to the theories in a statement saying, “While other theories were considered and researched, the investigation did not reveal the involvement of a state-sponsored group or co-conspirators.”

The finding distresses the mourners, who believe that people in Los Angeles are in denial about the terror threat.