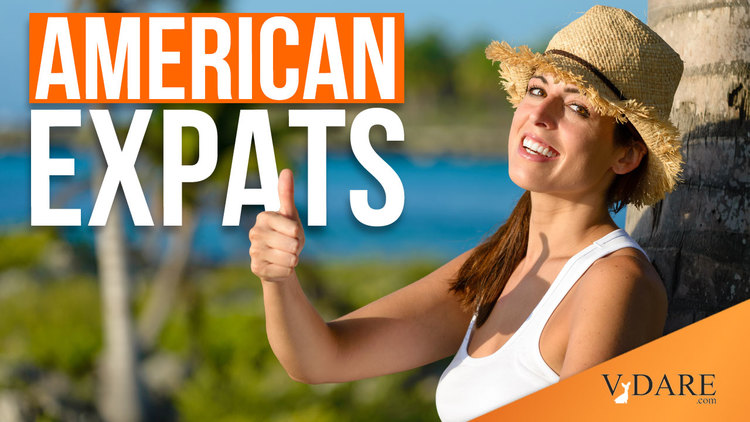 From a Los Angeles Times opinion columnist (and former Unz Review contributor) who is really peeved at the very thought of the Who and Whom occasionally getting reversed in Mexico-America migration:

Column: The new generation of smug American expats in Mexico needs to face the truth

… That they’re ending up in foreign countries and living large while their new neighbors struggle is terrible yet so apropos for the type.

And they’re completely different from immigrants, which some of these expats insist that they are. But the differences between the two seemingly similar groups are as varied as those of a refugee and a tourist.

Expats have the financial capital to chase the good life. Immigrants never can.

Mr. Arellano has never been to Arcadia, CA, I’d guess. Or to Bel-Air. You might think that a Los Angeles Times columnist should be aware that Southern California is full of Russians and Ukrainians, Chinese and Taiwanese who showed up loaded with cash that they got who knows how. Granted, it’s not Miami where the Hispanics show up rich, so he doesn’t know about it.

Expats know that if they fail, the cushion of their home country will break the fall; immigrants know there’s no turning back so must plunge ahead.

Expats can move whenever and wherever they want. Immigrants can’t. Expats connect to the countries they live in in the most superficial ways and add little to it; immigrants become part of their new homelands and fundamentally alter its course.

The movement of Americans to Mexico in particular reminds me of what happened at the turn of the 20th century, when American industry moved en masse and usurped billions of dollars in wealth while adding nothing to the country except exploitation. So after I read Kate’s piece, I called up Adrián Félix, a UC Riverside ethnic studies professor and fellow jerezano who specializes in studying Mexican migration, specifically from Zacatecas.… But what’s even more tone deaf, Félix argues, is that these new residents skip through Mexico in a mobile cocoon that largely protects them from the real world around them.

“The surrounding areas and permanent residents are hit hard by violence and poverty,” he said. On the whole, “expats are immune to that.”

It’s playing the game of life on someone else’s server with cheat codes.

It’s a privilege afforded to American expats, and allowed—but they should at least be honest about their hell of an advantage.

It’s almost as if Mr. Arellano sees immigration as Conquest Lite and thus is immensely enthusiastic about his team, Mexicans, migrating to America, but is outraged when The Enemy, Americans, migrate to Mexico.

It would be interesting to know what he thinks of Mexicans who migrated to California, became American citizens, and got good jobs in Silicon Valley or Hollywood and are now expats in America doing work from home from the beach in Mexico. Is that OK?

What about Guatemalans who become American citizens and now are expats in Mexico doing work from home?

I presume Guatemalan-American expats in Mexico have mestizo cosmic race racial privilege, but, still, they are filthy sub-human Guatemalans taking up space given by God, Cuauhtemoc, and Cortez to the Mexican people.