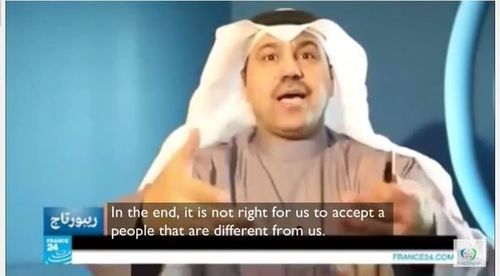 Kuwaiti Official: "We Should Never Allow Refugees in our Country"—It's Too Expensive For Them!

I haven’t found any evidence that this is for real. I don’t speak Arabic so I have no idea if the subtitles are wholly made up or not. And the “Kuwaiti official” has a good face for television comedy. But still …

UPDATE: Okay, I was overly-cautious (I’d rather err on the side of caution.)

In any case, it seems pretty plausible that this is how the Gulf Arab governments more or less see the situation, which is why they have taken in as refugees virtually none of their Arab brethren from Syria.

Of course, we here in the West know far better, having read numerous Tumblrs about the situation ever since that little boy drowned.