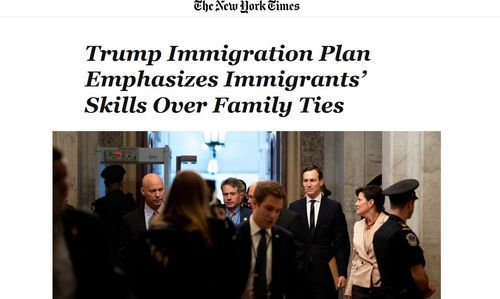 Jared Kushner, President Trump’s son-in-law and senior adviser, spent months working on the plan, which will be a central part of Mr. Trump’s re-election campaign message.

WASHINGTON — President Trump on Thursday will unveil a plan to overhaul parts of the nation’s immigration system that would impose new security measures at the border and significantly increase the educational and skills requirements for people allowed to migrate to the United States.

The proposal, senior administration officials said on Wednesday, would vastly scale back the system of family-based immigration that for decades has allowed immigrants to bring their spouses and children to live with them, the officials said. In its place, the new plan would provide opportunities for immigrants who have specific skills or job offers to work in the United States, provided they can demonstrate English proficiency and educational attainment, and pass a civics exam.

Jared Kushner, the president’s son-in-law and a White House adviser, spent months working on the plan, which will serve as a central part of Mr. Trump’s re-election campaign message. Working with him was Stephen Miller, the president’s top immigration adviser, but the plan falls short of the more extreme measures that Mr. Miller has long pressed the president to adopt and that have long been opposed by Democrats in Congress.

… It calls for construction of some of the border wall that is a preoccupation of Mr. Trump’s and vehemently opposed by Democrats, and upends family-based migration in ways that Democrats and immigrant advocates have long opposed. And it contains no provision for providing legal status to people brought to the United States as children, known as Dreamers, or other undocumented immigrants.

At the same time, the plan would not reduce the overall level of immigration into the United States, a longstanding goal of conservative, anti-immigration groups that had hoped Mr. Trump’s election would finally provide the political backing for lowering the number of legal immigrants allowed in the country.

So, is the plan to campaign on a completely moderate platform to expose how insane Democrats have gotten on immigration? Would that work?