Kristof Does Battle with His Commenters Again

When Whites Just Don’t Get It, Part 2 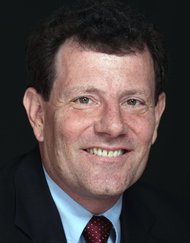 IN my column a week ago, “When Whites Just Don’t Get It,” I took aim at what I called “smug white delusion” about race relations in America, and readers promptly fired back at what they perceived as a smugly deluded columnist.

Readers grudgingly accepted the grim statistics I cited — such as the wealth disparity between blacks and whites in America today exceeding what it was in South Africa during apartheid — but many readers put the blame on African-Americans themselves.

“Probably has something to do with their unwillingness to work,” Nils tweeted.

There was a deluge of such comments, some toxic, but let me try to address three principal arguments that I think prop up white delusion.

First, if blacks are poor or in prison, it’s all their fault. “Blacks don’t get it,” Bruce tweeted. “Choosing to be cool vs. getting good grades is a bad choice. We all start from 0.”

Huh? Does anybody really think that we all take off from the same starting line?

Blacks were, evidently, created de novo on the dock in Virginia in 1619. Nothing that ever happened to them in Africa in the hundreds of generations before American slavery had any lasting impact on them. Granted, father-absent family structures in Africa look much like they do in the housing projects in Chicago, as Barack Obama noticed on his first visit to his extended family in Kenya. His aunt’s Nairobi home was

“just like the apartments in Altgeld, I realized. The same chain of mothers and daughters and children. … The same absence of men.”

But that line of thought violates the 1619 Rule, so crimestop yourself.

Moreover, nothing that has happened in America beginning in the 1960s and afterwards, when liberals have been in charge of managing race in obsessive detail, can have had much influence on blacks. Remember, the only time that matters is 1619-1963. The further we get from slavery and Jim Crow, the more powerful their malign hold over contemporary blacks becomes.

Also, don’t even think about trying to gather evidence about whether or not “self-doubt” is the best overall descriptor of black average personalities.

Some responded to discrimination and lack of opportunity by behaving in self-destructive ways.

One study found that African-American children on welfare heard only 29 percent as many words in their first few years as children of professional parents.

It’s unfortunate that blacks play only symphonies, string quartets, Sousa marches, bop jazz, and New Age instrumentals in their homes. If only they’d listen to music with singing, or, even better, rhythmic talking. My nonagenarian father once hypothesized the existence of what he called “yap music” that consists of people yapping. Blacks should try fleshing out my father’s idea of yap music so that their children will hear more words.