Evidence continues to accumulate that the killer of seven at Oikos University, One L. Goh, was a very stressed-out immigrant struggling with issues of money and assimilation.

That the shooter fits the profile of Immigrant Mass Murder Syndrome (about which I have written at length) wasn’t surprising. The strains of assimilating to a different culture and language are very difficult even in positive circumstances, but when problems like insufficient money and a family tragedy are added to the mix, the accumulated failures may explode.

Goh owed creditors all over the country and had been evicted from an apartment for non-payment of rent. His brother, a sergeant in the army, was killed in a car crash last year. Goh had been thrown out of Oikos University, designed to be a comfortable transition place for Korean immigrants. His fellow students teased him for poor English skills. Life wasn’t going well, and he was no longer a hopeful young man at 43. He wasn’t celebrating diversity when he bought a gun to punish people he thought were mean to him.

It’s also curious that six out of seven victims were women. Perhaps Goh barged into a nursing class that was mostly women, and that was the reason for the preponderance of female victims. Or maybe there was sexual resentment as well. The victim photos released so far show vibrant young women who probably weren’t very interested in a 43-year-old overweight man with poor communications skills. 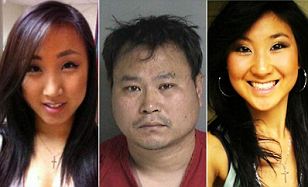 What’s interesting is the liberal media’s acceptance of the idea that failure to assimilate can be a cause of violence, though the MSM doesn’t exactly use those terms. For example, the high poobah of liberal sensibility, the Huffington Post, recycled an AP story using the headline: One L. Goh, Oikos University Shooting Suspect, Was Upset About Being Teased Over Poor English Skills: Police. Maybe HuffPo thought the story had elements of bullying, which is a popular bete noire being decried in the press these days.

Here’s the start of the HuffPo article:

OAKLAND, Calif. ‚Äî One Goh’s life was on the skids even before he became the suspect in the nation’s biggest mass school shooting since Virginia Tech.

He was chased by creditors. He grieved the death of his brother. In January, he was expelled from Oikos University, a small Christian school where he studied nursing. And, police say, he was angry.

Goh, who was born in South Korea, told them he felt disrespected by teasing about his poor English skills at the Oakland school ‚Äì a college founded as a safe place where Korean immigrants could adjust to a new country and build new careers.

So, he bought a gun and a few weeks later took his revenge, opening fire at the college on Monday in a rampage that left six students and a receptionist dead and wounded three more, authorities said.

“It’s very, very sad,” police Chief Howard Jordan said. “We have seven people who didn’t deserve to die and three others wounded because someone who couldn’t deal with the pressures of life.”

Police have released little background information about Goh, other than to say he had become a U.S. citizen.

A nursing professor who taught him said Goh would often tell a story about beating someone up who tried to mug him in San Francisco. Romie John Delariman said Goh would say that he picked fights at a park when he was bored.

“Sometimes he would brag that he was capable of hurting people,” Delariman told The Associated Press. “He said he was too old to go school with all the young people, and he said all his classmates were mean to him.”

Note the mention of Virginia Tech and another Korean mass murderer (hence the blog title), Seung-Hui Cho, whose severe anti-social behavior was ignored by university authorities because of political correctness until it was too late.