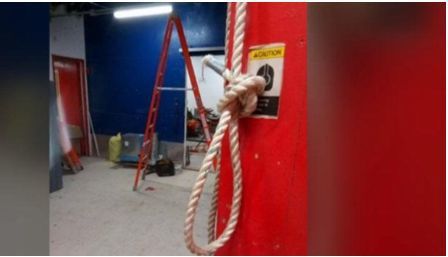 From CBS News a couple of weeks ago:

Annapolis, Maryland — The U.S. Naval Academy is investigating after what appears to be a noose was found hanging on academy property on the 56th anniversary of the March on Washington.

Naval Academy Superintendent Vice Admiral Sean Buck said in a statement Friday that the noose was found in a construction zone off-limits to staff in Rickover Hall, the school’s engineering building.

Do you think that when Admiral Hyman Rickover was a cadet at the Naval Academy he had learn the names for various knots? Or was every knot back then some kind of noose like they are today?

Carl Snowden is chairman of the Caucus of African-American Leaders. He says the caucus was contacted anonymously about a noose being hung on August 28, the 56th anniversary of the March on Washington led by the Rev. Martin Luther King Jr., when he gave his historic “I Have a Dream” speech. The group contacted the academy. …

Buck said while it’s possible the noose was part of a hoisting system to complete ductwork, the academy will investigate it because it “takes all allegations of race hate very seriously and is working quickly and diligently to determine the facts surrounding the reported incident, specifically why the reported incident was not brought to light sooner.”

CBS Baltimore quotes Snowden as saying, “Nooses, like swastikas, conjure up images of a dark past.”

Something must be done about the epidemic of Knot Racism. I blame Trump.

But from Associated Press today:

Naval Academy: ‘Unlikely’ rope and knot meant to be a noose

ANNAPOLIS, Md. (AP) — An investigation at the U.S. Naval Academy has found it is “unlikely” a rope and knot found over a door in a construction area was meant to be a noose, but the possibility could not be definitively ruled out.

The academy announced Friday that the rope resembled a common construction device used to hoist items, although it was draped over a door “for no readily apparent reason.”

The academy says the investigation didn’t discover who placed the rope over the door or identify any existing racial animus on the job site.

As Stephen Jay Gould would say, “Say it five times before breakfast everyday: ‘Just because something is Knot Racist, it’s still racist.'”