The world is certainly curious when the Muslim ruler of a Middle Eastern nation takes it upon himself to caution the American people about a particular gang of Islo-extremists who happen to run Egypt. But King Abdullah of Jordan apparently thought Barack Hussein Obama and the State Department could use some helpful advice about the Muslim Brotherhood, specifically what kind of rough characters are wearing those proper business suits.

In a new Atlantic article about King Abdullah, Monarch in the Middle, the king opined that American officials don’t take the Brotherhood seriously enough:

Which is not to say that the Hashemites don’t harbor visceral dislike for the Brotherhood. Abdullah expounds on that dislike to many of the Western visitors he receives—in part because he believes his Western allies are naive about the Brotherhood’s intentions. “When you go to the State Department and talk about this, they’re like, ‘This is just the liberals talking, this is the monarch saying that the Muslim Brotherhood is deep-rooted and sinister.’?” Some of his Western interlocutors, he told me, argue that “the only way you can have democracy is through the Muslim Brotherhood.” His job, he says, is to point out that the Brotherhood is run by “wolves in sheep’s clothing” and wants to impose its retrograde vision of society and its anti-Western politics on the Muslim Middle East. This, he said, is “our major fight”—to prevent the Muslim Brothers from conniving their way into power across the region.

It doesn’t help that Obama has had some overblown opinions about his own persuasive abilities relating to the Muslim street. One stunningly arrogant example was his statement in a 2007 radio interview that an Obama Presidency would make America safer:

I truly believe that the day I’m inaugurated, not only the country looks at itself differently, but the world looks at America differently. . . If I’m reaching out to the Muslim world they understand that I’ve lived in a Muslim country and I may be a Christian, but I also understand their point of view…My sister is half-Indonesian. I traveled there all the way through my college years. And so I’m intimately concerned with what happens in these countries and the cultures and perspective these folks have. And those are powerful tools for us to be able to reach out to the world. . . then I think the world will have confidence that I am listening to them and that our future and our security is tied up with our ability to work with other countries in the world that will ultimately makes us safer.

Some pundits think Obama has grown out of his naivete, but he is still handing out jizya, er foreign aid, recently in the amount of $250 million for Egypt, either to buy friendly relations or in genuine support of the Brotherhood, take your pick. 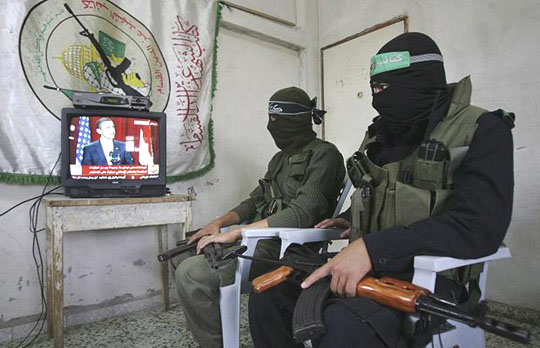 Back to the present time, CNN’s Jake Tapper interviewed the author of the Atlantic article about King Abdullah, examining his increasingly lonely position as a pro-western leader in the more radicalized Middle East.