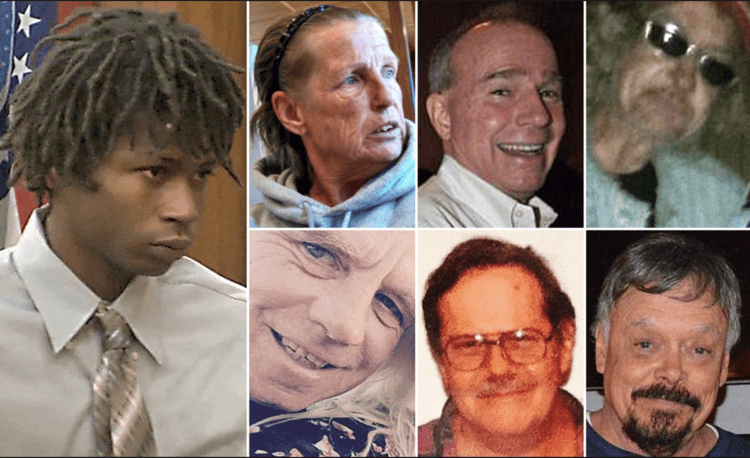 The amount of anti-white hate across the nation by blacks, barely covered by the local media and largely ignored by the national press, is truly astonishing. [Shots fired suspect, ‘I don’t like white people in my hood,’ FoxBaltimore.com, July 30, 2019]

But it’s the story of a black serial killer who targeted white people in Kansas City, Missouri, effectively kept under the radar for three years by the national media, that requires consideration today.

Her Name is Karen Harmeyer.

His Name is John Palmer.

His Name is Steven Gibbons.

His Name is Michael Darby.

His Name is Timothy Rice.

His Name is David Lenox.

They were murdered by a black man motivated by anti-white hatred, a serial killer who would still be targeting whites along Indian Creek trail had he not been apprehended. [‘Kill all white people’: Accused killer who targeted white victims now charged in six deaths, Washington Post, July 28, 2019]:

For a year, the walking and biking trails snaking through south Kansas City, Mo., were plagued with bloodshed.

Beginning in August 2016 and continuing deep into the next year, the bodies of hikers and dog walkers were found dead along the city’s Indian Creek trail or on nearby roadways. They were all shot. They were all middle-aged. They were all white.

The killing stopped after the August arrest of Fredrick Demond Scott, a 22-year-old Burger King employee. As The Washington Post reported in September, Scott, who is African American, had allegedly threatened to shoot up his high school and “kill all white people.”

He was the suspect in three additional deaths, and on Friday a grand jury in Jackson County indicted Scott in connection with them. The victims, according to the Associated Press, were Michael Darby, 61; Timothy Rice, 57; and David Lenox, 67.

“We’re thankful that he is off the street and hopefully he’ll be held accountable for what he has done,” Mindy Lenox, the David Lenox’s daughter, told the Kansas City Star. “I don’t know for me personally that there is any closure. Nothing can bring my dad back and nothing can take that pain away, but at least knowing that the person responsible will be held accountable, it will certainly be helpful.”

After Scott’s arrest, local news outlets dug up his alleged past threats regarding race. In 2014, Scott was a student at an alternative school when he allegedly threatened to “shoot the school up, Columbine-style.” According to municipal court documents, he also spoke of wanting to kill himself and to “kill all white people.”

In the book Hate Crime Hoax: How the Left is Selling a Fake Race War, we learn an unsettling truth seemingly invalidating the title of the book — 82 to 85 percent of interracial crime involving white and black people is black on white violent crime:

There is an astonishing level of consensus, at least among scholars, on the fact that almost all of the interracial crime that does occur in the United States is POC-on-white. In the representative year of 2008, 429,000 Black-on-white violent crimes and only 91,000 white-on-Black violent crimes were recorded by the FBI, and the proportional breakdown of interracial offenses by race was nearly identical during 2012 and 2015.

The FBI would seem to indicate a race war is actually taking place, albeit an undeclared one, when 82.5 percent to 85 percent of interracial crime involving white and black people is black-on-white violent crime.

Were a white man indicted for targeting and murdering six black males and declaring his intent to “kill all black people,” he would be a household name and live in infamy. Movies, television series, and books would be written to remember his victims and the white man’s actions would be taught in schools across the nation as a reminder of just how pernicious all white people are across America. His actions would be deemed representative of all whites.

As it is today, Fredrick Demond Scott is a name few people know and fewer are aware he targeted six white people and murdered them for being white.

After all, Their Lives Matter Too.