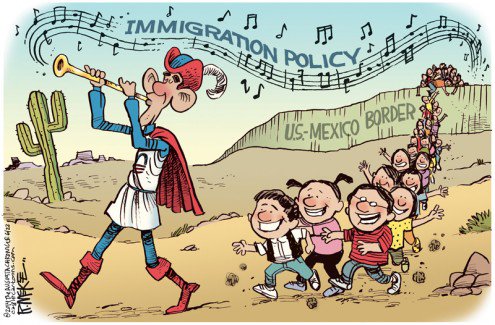 The open southern border gets little media attention in these days of shrill political stories that practically write themselves. But the welcome mat remains out for the planet’s billions of residents to come to America and vote Democrat. They continue to respond, especially persons from Central America. Thousands of minors are coming, and many are bringing their parents so they won’t get lonely.

In addition to the 6,476 people apprehended in November, the open border attracts a diverse clientele. On December 4, Judicial Watch reported Middle Eastern Men Arrested Near Mexican Border with Steel Cylinders. Two of the five men were carrying the cylinders in backpacks, so the tubes could not have been too large. But you have to wonder what sort of evil they had planned now in the latter days of the permissive Obama reign.

But not to worry: the administration is responding to the chaos by opening emergency shelters.

Filmmaker Dennis Michael Lynch appeared on Newsmax with J.D. Hayworth to discuss the situation and the nation-changing aspects of Obama’s welcoming open border. Both agreed that a moratorium is needed for national security:

The surge of illegal immigrant children continued unabated in November, pushing the Obama administration to announce emergency measures to try to handle a problem it thought it had solved earlier this year.

Two months into the new fiscal year, the number of unaccompanied minors jumping the border and getting caught is at an all-time high. So far, the U.S. Border Patrol has picked up over 10,500 — more than twice the number at the same point last year.

The number of families trying to cross also has surged, with more than 12,500 people caught — a 173 percent increase over last year. The family surge underscored the changing nature of the flow of migrants, with parents increasingly risking the journey with young children in tow, hoping to take advantage of what they believe are lenient deportation policies under President Obama.

Migration usually surges in the spring then drops in the summer and remains low through the winter. This year has defied that trend, leaving the Obama administration scrambling to rejuvenate its capacity to handle a problem that Homeland Security officials hoped was behind them.

“We continue to aggressively work to secure our borders, address underlying causes and deter future increases in unauthorized migration, while ensuring that those with legitimate humanitarian claims are afforded the opportunity to seek protection,” U.S. Customs and Border Protection said in a statement.

The surge of Central American women and children began several years ago and peaked in May and June last year, when more than 20,000 were caught at the U.S.-Mexico border every month. By the end of last year, the numbers had dropped precipitously and Homeland Security officials were optimistic that they had solved the problem.

Numbers have climbed steadily this year, however, and November’s 5,615 illegal immigrant children caught at the border is the highest monthly total since June 2014, when some 10,508 were apprehended.

Among families, the 6,476 people apprehended in November — mostly women with young children — was the most since July 2014, when 7,436 were caught.

Under Obama administration policy, illegal immigrant children from countries other than Mexico or Canada cannot be sent home quickly. Instead, they must be processed and sent to live in juvenile homes or with sponsors, awaiting court dates that often don’t come for years.

Meanwhile, a federal judge ordered this summer that the women and children be processed quickly and released into the U.S. to await their court dates.

Both policies serve to entice those in Central America to make the journey, believing they can earn a place in the shadows.

“What the new arrivals are telling the Border Patrol is that they came because they knew they would be allowed to stay,” Jessica Vaughan, policy studies director at the Center for Immigration Studies, told the Senate Judiciary Committee last week. “If we want to change that incentive, the policy has to change.”

“Shamefully, we’ve focused more on ways to keep migrants out of our country rather than helping them address the misery in their homelands, misery we’ve unfortunately helped create through our appetite for illegal drugs,” he said in the report.

He said the U.S. does need to figure out the “pull” factors that draw in illegal immigrants but that cannot succeed without addressing the “push” factors.