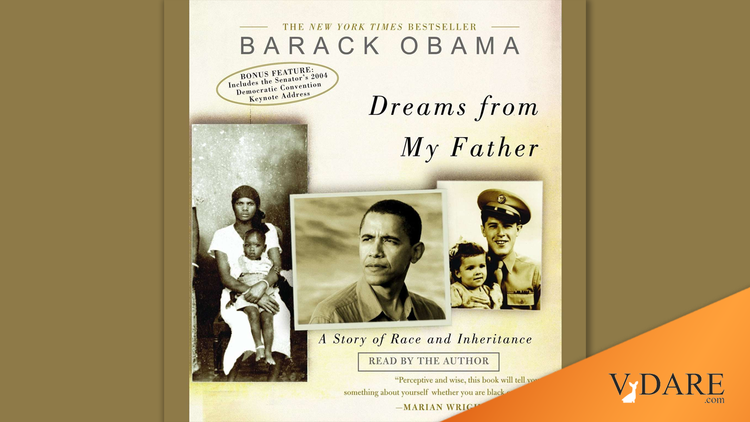 But he knows one thing for sure: I can't possibly be right about it!

The Washington Monthly's blogger Kevin Drum loyally tries to stand up for his employer's much-snickered over story by young Alexander Konetski about his brief tenure as a copy editor at The American Conservative and how he heroically resigned because the editors wouldn't spike my Obama story, Obama's Identity Crisis, on his say-so.

Of course, there's also the possibility that Drum is subtly sticking it to his employer by quoting a particularly amusing part of the self-important Konetski's screed:

Even before I read the piece I knew I wouldn't like it. TAC's editor, who was pleased with Sailer's work, had told me as much. But I found the piece so offensive when I first read it that I jumped out of my chair and rushed into the managing editor's office to try to kill it on the spot. She and the editor promptly dismissed my objections. The piece is provocative, they said – it's edgy. It's racist, I said – and the magazine will be regarded as such for publishing it. ....The weekend after Kara and Scott dismissed my objections to Sailer's essay, I read Dreams From My Father.

In other words, Konetski jumped to a conclusion with no idea what he was talking about, then scrambled to find evidence for it.

Ironically, the Washington Monthly did an abysmal job of fact-checking an article accusing The American Conservative of poor fact-checking. Konetski, who had been hired in November, tries to give the impression that he was a Major Player at the magazine while implying that I was some obscure figure who had "submitted" an article on Obama (instead, it was commissioned) that for some inexplicable but no doubt vile reason the editors chose to believe me over a Big Wheel like him.

In reality, the editors trusted me rather than him because I had a track record of approximately 100 pieces published in TAC going back to its first issue in 2002. As they well know, I've frequently been smeared by more formidable figures than Alexander Konetski, but have always ended up with the facts on my side.

Drum's item is most interesting for his somewhat philistine but reasonable characterization of Obama's Dreams from My Father: A Story of Race and Inheritance:

None of which is to say that Obama wasn't confused and uncomfortable with his racial identity for much of his first three decades. In fact, that's the whole point of the book. What's more – and this is the part of Dreams I found most peculiar – it's never really clear why. In language that's often florid and overwrought, but also oddly artificial, he tells us how he feels, but the circumstances of his life are never drawn starkly enough to make it clear why he feels the way he does.

In other words, Drum implies that Obama's emotions about race weren't objectively justified by the rather pleasant life he has lived. Which is certainly true.

But after that brief foray into honesty, Drum goes back to beating the, uh, drum over my sins. Unfortunately, all he can come up with is naked assertion:

... Sailer wants us to believe that this act of black identification automatically suggests a rejection of Obama's white heritage. Unfortunately, this says more about Sailer's state of mind than Obama's. There's simply nothing in the book to seriously back it up."

Well, no, it's not true that black identification "automatically" suggests a rejection of Obama's white heritage. For example, Obama's half-white half-brother Mark, a Stanford physics student who had grown up in Kenya, refused to reject his white heritage, which caused Obama break off contact with him.

But it is true in Obama's specific case, as voluminously documented in his long autobiography, that identification with the black race involved emotional rejection of the white race. (At least, if his book is to be believed, which is a big if — he didn't actually reject the many privileges granted to him by such white-founded institutions as Punahou Prep, Occidental College, Columbia University, and the Harvard Law School.

At this point, all I can say is, "Please read the book." It's better-written than Drum claims, and not so puzzling as Drum found it ... if you don't make the a priori assumption that I just have to be wrong about it.