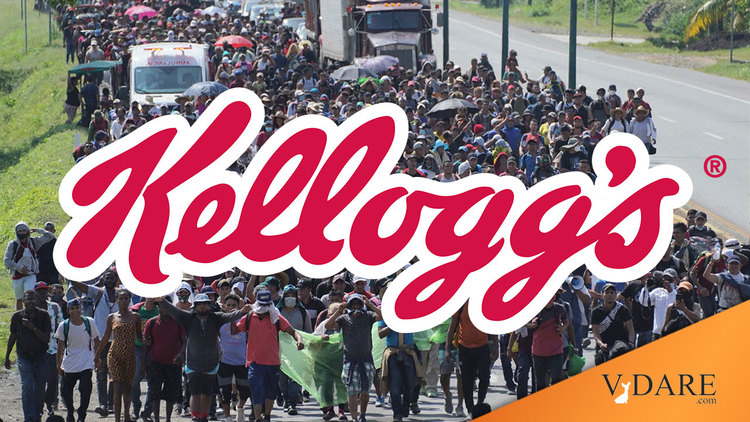 Because the Biden Regime can’t replace the Historic American Nation fast enough, the Kellogg Foundation is stepping in to provide new incentives for Illegal Aliens in the state of New Mexico.

The New Mexico Economic Relief Working Group has partnered with UpTogether, a national nonprofit, to provide the monthly payments to qualifying families beginning in March. The coalition says the NM Immigrant GBI Project will be the first statewide GBI effort.

ERWG said 330 families from 13 New Mexico counties, including Doña Ana County, will receive monthly payments of $500 for 12 months beginning in March. The payments will be delivered through direct deposit or prepaid cards, and there are no conditions on what the money can be used for. Funding is coming from the W.K. Kellogg Foundation and UpTogether, a news release states.[Emphases added throughout]

Radical leftist causes are nothing new for the Kellogg Foundation. In recent years the foundation has donated to Black Lives Matter, Soros’s Open Society Foundation, and others.

Johana Bencomo, a Las Cruces city councilor, has been pushing for the city to implement a pilot GBI program at the municipal level using federal pandemic relief funding.

"I believe that poverty is a policy choice," Bencomo said last June when first advocating for GBI during a city council meeting.

NM Voices for Children will be conducting a survey of the participants throughout the duration of the project to see how the recurring cash payments affect "family finances, health and educational outcomes, as well as decisions about work."

Similar universal basic income (UBI) pilot programs have been tried in countries like Canada and Finland—they failed miserably. It turns out paying people to survive wasn’t exactly motivating. For example:

Mr Simanainen says that while some individuals found work, they were no more likely to do so than a control group of people who weren't given the money. They are still trying to work out exactly why this is, for the final report that will be published in 2020.

But Amber Walling, executive director of New Mexico Voices for Children, disagrees, saying "These programs create stability for families, which allows them to plan for the future and pursue better employment opportunities."

If it wasn’t already glaringly obvious, it should be now—Legacy Americans are second class citizens to the ruling corporate/political Regime—not even eligible as guinea pigs in UBI poverty trap experiments.