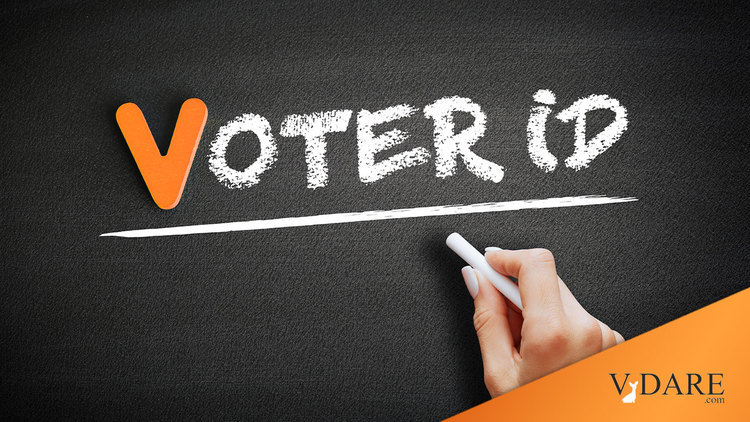 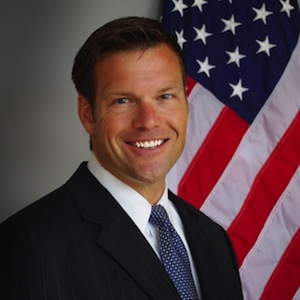 Friday’s New York Times front page included a whiner about a college student who claimed she was too busy to obtain proof of citizenship required to vote in Kansas (where sovereignty warrior Kris Kobach [pictured] is Secretary of State).

A distracted student is news?

This is pretty weak gruel, even for Carlos Slim’s Amnesty Gazette.

A 21-year-old because miffed when his visit to the DMV didn’t produce the voting card he expected, so he is part of a lawsuit. The characters presented by the Times seem like slackers at best, and are not very sympathetic. Doesn’t anyone tell the kids these days that becoming an adult requires getting all your official papers?

The Times must think that actually requiring people to prove citizenship to vote is too hard for young and/or diverse people.

However, the public still regards law and sovereignty as valuable: a Rasmussen poll last year found that 78 percent favored proof of citizenship before being allowed to vote. The survey was prompted by a federal judge upholding the right of states to require proof of citizenship in order to register for voting.

Amelia Flores, a high school senior with plans to become an electrical engineer, eagerly filled out a form to register to vote for the first time at the Kansas State Fair last month. But she left the fair without registering, stymied by a state law championed by Republicans who dominate elected offices in Kansas that requires her to provide proof of citizenship.

“I think it’s ridiculous and restrictive,” said Ms. Flores, who later received a notice in the mail informing her that she must produce a birth certificate or other proof of citizenship to complete the registration. “A lot of people are working multiple jobs, so they don’t have time to get this stuff done. Some of them don’t have access to their birth certificate.”

Ms. Flores, who said she was born in Washington State, unwittingly joined a list of more than 36,000 people in Kansas who have tried to register to vote since the law went into effect in 2013, but then did not complete their registration. This month, under a rule adopted by the Kansas secretary of state’s office, county election officials throughout the state began to cull names from the voters list, removing people who had been on it at least 90 days. Those removed from the list must start the registration process over in order to vote.

The move has touched off a new battle over voter registration, pitting the Republican secretary of state, Kris W. Kobach, an ardent supporter of strict voting rules, against Democrats and advocates of voting rights who say the law was intended to suppress voter turnout. Mr. Kobach was named in a federal lawsuit filed in September by two plaintiffs who had applied to register to vote in Kansas but were added to the roll of incomplete registrants when they did not submit proof of their citizenship.

In an interview, Mr. Kobach said culling the list would help address complaints from county clerks that notifying people of the law’s requirements was costly and often ineffective. He asserted that most of the people on the list had moved since their initial registration or “never had any intention of voting in the first place.” And he defended the law as necessary to prevent voter fraud.

“We now live in a society where there is a record number of noncitizens who live with us,” he said. “This is a common sense way of ensuring that only U.S. citizens are able to vote.”

But advocates of voting rights said the Kansas law, like about a dozen similar voter identification laws passed in Republican-led states since 2011, is intended to depress voter turnout among groups that lean Democratic, including low-income and minority voters.

Douglas Bonney, the legal director for the American Civil Liberties Union of Kansas, said the Kansas requirements might particularly discourage young voters who do not have ready access to the required documents. “It has caused a massive wall for them,” he said.

An analysis by The New York Times of the list of voters showed that more than half of them were under 35, and 20 percent were from 18 to 20 years old. Fifty-seven percent of the people on the list did not declare a party; 23 percent were Democrats; and 18 percent were Republicans. The vast majority — 90 percent — had never voted before.

“This disproportionately hits 18- to 24-year-olds,” said Jamie Shew, a Democrat and the county clerk for Douglas County, Kan. “For a lot of them, they say, ‘I’m not going to worry about it.’ They’re busy and this is just one more thing to do.”

Under the law, which was passed in 2011, registrants must prove citizenship by producing a document from an approved list, which includes birth certificates, passports and naturalization records. They may bring the document to a county clerk’s office or email a photo of it. Under Mr. Kobach’s new rule, if they fail to do so, they would be removed from the voters list after 90 days. Residents can try to register again even after being removed from the list.

The 36,000 people on the list represent about 2 percent of the state’s 1.7 million registered voters. The Wichita Eagle reported in September that more than 16 percent of people who have tried to register to vote since the law went into effect in January 2013 have been placed on the list.

Several people on the list who were contacted by The Times said that they did not remember trying to register to vote and had no idea why their names were on the list. Two people said that they had moved out of state since they began the registration process, so had not bothered to complete it. Several others said they had wanted to vote but felt hamstrung by the requirement to provide proof of citizenship, and eventually gave up.

One of the plaintiffs in the lawsuit, Cody Keener, 21, said that he tried to register to vote while renewing his driver’s license last year and assumed that his registration was complete. Mr. Keener, a full-time student at Baker University who lives in Lawrence, Kan., said he later received a notice from the Douglas County clerk’s office that he had been marked as “in suspense” because he had not submitted proof of citizenship. Angered by that requirement, he decided to join the suit.

“I walked out of the D.M.V. under the impression that I was registered,” he said. “When I found out later that 36,000 other people were on the list, I thought about how many people would be in my shoes, and how many tens of thousands of people would show up on Election Day thinking they were registered to vote.”

Mr. Shew, the clerk for Douglas County, whose most populous city is Lawrence, which is home to the University of Kansas, said many people had expressed frustration with the law. “The part that’s disheartening to me is, you hear a lot of people on the phone say, ‘This is just too much to deal with, forget about it.’”

Mr. Shew said that before the proof of citizenship requirement, a provision of the law known as the SAFE Act, went into effect in January 2013, registering to vote required no identification.

Kansas is one of four states that require proof of citizenship to register to vote, along with Alabama, Arizona and Georgia. According to the National Conference of State Legislatures, only Kansas and Arizona are currently enforcing the law. In Georgia, officials said they were still smoothing out legal and technological requirements and did not yet have a timeline for when the law would take effect. In Alabama, the secretary of state’s office said that its proof of citizenship law conflicted with a federal law and could not currently be enforced.

Though advocates of the laws contend that they prevent illegal voting, critics assert that voter fraud is rare. Even Mr. Kobach said in the interview that he knew of fewer than a dozen cases of noncitizens who had successfully voted in Kansas in the last seven years. But last Friday, he moved to prosecute three cases of suspected voter fraud, the first time in Kansas history that a secretary of state had prosecuted a voting crime, his office said.

Michael Smith, an associate professor of political science at Emporia State University in Kansas, said that the list was populated by many young people who were “very skittish, very skeptical” of the voting process and who would be less motivated than others to vote.

“I have no doubt that if this population was fully registered, the turnout rate would be on the low side,” he said. “But we’re still talking about enough voters that they could swing a close election.”

Zachary Lamb, 22, one of the would-be voters on the list, said he remembered trying to register, but disregarded a follow-up notice in the mail reminding him to complete the process.

It directed him to go to a building and bring paperwork, said Mr. Lamb, a football coach and a Republican, but he had never found the time.

But he said he agreed with the law demanding proof of citizenship, a requirement he did not believe was too much to ask.

“Honestly, I think I’ve just been lazy, and I’ve been pretty busy,” he said. “I don’t think it’s too difficult of a process to go through.”