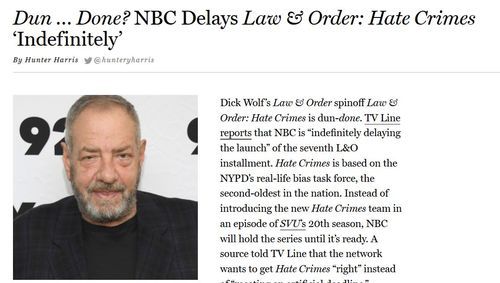 NBC has announced it’s delaying the debut of Dick Wolf’s seventh Law & Order show, Law & Order: Hate Crimes, to get it “right.” This postponement has nothing, nothing to do with the Jussie Smollett hoax or the triumphant announcement by the NYPD Hate Crimes Task Force (which will be featured in the show) last week that it had apprehended the sidewalk chalk Nazi terrorist and … then released him to his mom because he’s only 12.

From NPR last fall, the solons and wisemen of NBC were not dreaming of their show being embarrassed by a series of hate hoaxes. From NPR:

SHAPIRO: This is the first new “Law & Order” spinoff in a long time. And right now America’s in the middle of this big debate about policing and how it affects people of color. Do you think this kind of show is helping the conversation about systemic problems in law enforcement and policing?

DEGGANS: That’s a challenge. You know, early seasons of “Law & Order” focused on how unfair the system was. We saw rich people escaping justice even when they were guilty. But I think they’ve changed that in recent years to make the show more entertaining. And the debate that we’re having now about policing suggests that maybe these systemic issues are purposefully unfair to people of color and poor people, which is a little more difficult concept for shows like “Law & order” to kind of approach and still be entertaining. You know, I’ve seen some studies that indicate that maybe they overrepresent black people as criminals and victims and underrepresent women. So, you know, I know the new “Law & Order” show’s going to focus on exploring issues of race and culture. I just hope they do it in an authentic way.

But Jussie Smollett threw a wrench in the works.