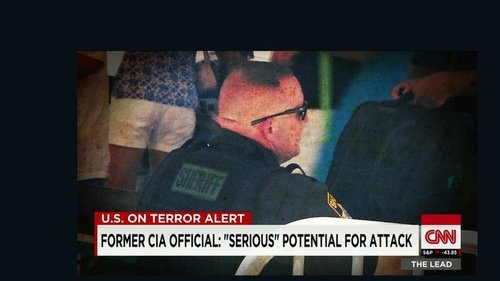 People who are wired in about hostile Muslims residing in America have been making the rounds for televised interviews, warning Americans to watch for murderous jihadists crashing the Independence Day party. Apparently there’s a lot of bad chatter going on among allah’s gangsters here and around the world.

Rep Peter King, Chair of the House Subcommittee on Counterterrorism and Intelligence, observed in a Newsmax TV interview on Tuesday, “In the last week or 10 days, there’s been five ISIS operatives arrested in New York City. Now that’s not coincidental. Its one thing you say someones a lone wolf. You don’t find five lone wolves operating together at the same time.”

Below is a photo of some of those arrested persons that was shown during the King interview. I was able to identify three of four of the diverse young men; left to right: Alaa Saadeh, Fareed Mumuni, Samuel Rahamin Topaz.

Chairman of the House Homeland Security Committee, Mike McCaul, remarked during a Tuesday interview, “I think we’re in one of the highest threat environments that I’ve seen in quite some time. The volume is very high. The recent arrests we had, particularly here in New York where we sit, just yesterday — it seems like every week we roll up some ISIS follower here in the United States.”

In addition, jihad-associated arrests are up overall. Patrick Poole has been keeping a list and the increase is large: Number of Islamic Terror-Related Arrests in 2015 Surpasses Previous Two Years Combined.

Maybe we have enough Muslim immigrants then. The normal process of assimilation seems not to work with many of them, maybe because they envision immigration as a strategy to conquer more territory for allah, known in Islam as hijra.

Islam is at war with us, a fact that Obama pretends isn’t happening, or doesn’t care, judging by the open borders. As former SEAL Rob O’Neill remarked the other day, “They remember they are at war with us even though we sometimes forget. Yeah, they’re going to hit us here.”

In fact, Islam is Americas oldest enemy as defined by the nations first foreign conflict, namely the Barbary Wars against Muslim pirates who captured and enslaved 1.5 million Europeans and Americans over two centuries. President Thomas Jefferson sent the navy to clean out the Muslims bases in North Africa to make the seas safe for Christians to travel.

So when Americans are warned of danger in normal public celebrations of our nation’s independence, then we definitely have too many Muslim immigrants and should stop admitting them immediately.

U.S. intelligence officials and lawmakers are worried that chatter about a terrorist attack on U.S. soil this Fourth of July may be more than just talk.

The FBI has arrested at least 10 U.S. citizens in three weeks who were plotting various attacks on the homeland on behalf of the Islamic State group, and the Department of Homeland Security issued a joint bulletin with the FBI last week putting local law enforcement agencies across the country on heightened alert.

I wouldnt be surprised if were sitting here a week from today talking about an attack over the weekend in the United States, former CIA Deputy Director Michael J. Morell said Monday on CBS This Morning. Thats how serious this is.

Mr. Morell said he was more concerned than usual about the alert partly because of the growing number of people in the U.S. who align themselves spontaneously and via the Internet with the Islamic State group, also known by the acronyms ISIS and ISIL.

Im worried about this one, he said.

Most U.S. recruits who have heeded the siren calls of the radical extremist organization planned to kill soldiers at military facilities and attempted to assail law enforcement officers. These calls often are proliferated through social media messages, an online magazine and other Internet-based propaganda.

Since the 9/11 terrorist attacks, 116 homegrown jihadi plots have been uncovered in the U.S. and more than half of them have been in the past three years, said Rep. Michael T. McCaul, Texas Republican and chairman of the House Committee on Homeland Security.

In the FBIs latest arrest, a New Jersey man was charged Monday with conspiring to provide material support to the Islamic State group and trying to persuade a witness to lie to the FBI. The mans brother traveled to the Middle East in May to join the terrorist group and was arrested in Jordan, authorities said.

This is not bin Laden with couriers now. This is a new generation of terrorists using the Internet in a very savvy way to attack the West and also get in the homes and in the basements in the United States to radicalize individuals and then call them up as sleeper cells to attack Americans, Mr. McCaul told Fox News Sunday.

Mr. McCaul said there has been an uptick in chatter about possible attacks over the July Fourth holiday weekend. Although Americans ought to enjoy parades and other events, he said, they should remain vigilant during these celebrations.

Though the Islamic State propaganda machine hasnt had much success in inspiring lone-wolf attacks in the U.S., its followers have committed much more mayhem in other countries, most recently in a series of attacks Friday in Kuwait, Tunisia and France.

A suicide bomber sympathetic to the Islamic State attacked one of Kuwait Citys most prominent Shiite mosques, killing 27 worshippers and injuring more than 200. A gunman killed 38 people, at least 18 of them Britons, in a rampage on a Tunisian beach frequented by European tourists. In France, a Muslim beheaded his boss, took a selfie with the severed head and then unsuccessfully tried to use a truck to blow up a U.S.-owned chemical warehouse.

A war against the Islamic State, he said, would be the struggle of our generation, and we have to fight it with everything we can.

In the Daily Telegraph, he specified that this means becoming more intolerant of intolerance among Muslim preachers, rejecting anyone whose views condone the Islamist extremist narrative and create the conditions for it to flourish.

Public schools and other official bodies would take steps starting this week to identify and tackle radicalization, he said.

The Islamic State issued a call to arms for attacks during the Muslim holy month of Ramadan, which began June 17 and ends July 17. The Islamic State group is also celebrating the first anniversary of establishing a caliphate, or an Islamic government, led by Abu Bakr al-Baghdadi.

The coincidence of the timings is another reason Mr. Morell said these threats may be likelier than usual to result in an attack.

In addition, analysts note, the Islamic State looks more than ever like the strong horse in Osama bin Ladens formulation.

Radical Islamists with a propensity to engage in terror have always been embedded in the country, but they have not heeded a call to action until now, said Jeff Addicott, director of the Center for Terrorism Law at St. Marys University in Texas. This is because ISIS is able to inspire them because of its success in establishing an actual caliphate.

Nevertheless, local law enforcement in the U.S. remains on guard.

We dont want to scare the public or send out false alarms, but we do know that the terrorist groups tend to capitalize on holidays, on events, on something that would make their issue more in the forefront, so if we were to have an event somewhere occur on the Fourth of July, that would play into their strategy, said Donny Youngblood, sheriff of Californias Kern County and president of the Major County Sheriffs Association.

Citing national security concerns, Mr. Youngblood declined to detail what the FBI and Homeland Security bulletin said or what specific preparations his team was making.

For example, many deputies who work for the Dane County Sheriffs Office are part of a regional response team and are trained to react to bomb threats. Those deputies have specialty skills and are trained to work with explosive ordnance devices or use their tactical intelligence skills to mitigate a threat, he said. That dual-purpose team of deputies also has the equipment necessary to react to a potential terrorist attack, Sheriff Mahoney said.

They may be on patrol, but theyll have their equipment to respond to whatever that specialty need is, he said. Some agencies have a dedicated team, but more and more today its becoming difficult, you know, unless youre a large metropolitan agency, to have dedicated resources.

Homeland Security Secretary Jeh Johnson said federal law-enforcement agencies issued the bulletin to say the department was encouraging all law enforcement to be vigilant and prepared. We will also adjust security measures, seen and unseen, as necessary to protect the American people.

Former CIA Director Michael V. Hayden said the best form of homeland defense is through an aggressive offense against Islamist terrorist groups in the Middle East.

What were going to have to do is disrupt the ISIS narrative, Mr. Hayden told Fox News.

Right now, they look as if because theyve been so successful on the battlefield, it looks like they are acting as the will and hand of God. I think we need to turn that around. We need to inflict battlefield defeats on them in their homeland, so that theyre not nearly as attractive to these kinds of folks globally, he said.