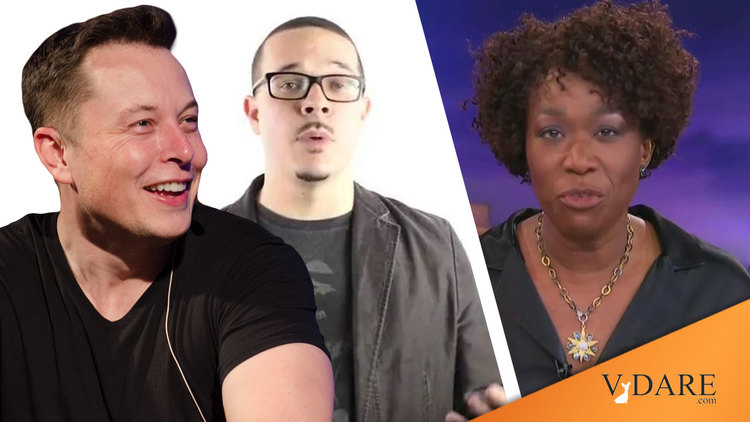 Earlier: Ann Coulter: This Thanksgiving, Joy-Ann Reid Has Much To Be Thankful For

Did a white South African just spend $44 billion to make the slur of white supremacist irrelevant? Because when trying to uplift the idea of free speech and defeat the concept of censorship and baseless accusations about “white power” when faced with undeniable truth, Elon Musk’s bid to acquire Twitter may have just permanently ended the stigma of the anti-white slur.

A black woman on MSNBC and a fake black man on Twitter have both tried to shame Musk for trying to—in their vernacular—restore the white supremacy of Apartheid South Africa.

Desensitizing your average white mother and father, who pay their taxes and work hard to drive their children to and from school and soccer practice, to the idea of no longer caring about being called a “white supremacist” for simply believing in free speech is worth protecting and defending is not a winning proposition for advancing the idea Musk is the bad guy.

In the eyes of those who stand to gain by censoring free speech with the slur of “white supremacy,” it’s a toxic concept.

On Tuesday night, MSNBC anchor Joy Reid implied that SpaceX/Tesla founder Elon Musk, who’s in the process of purchasing Twitter, wants to own the social media site to restore the white supremacy of Apartheid-era South Africa.

In Reid’s telling, right-wingers on Twitter have “been described as being on the outside of the culture looking in through the glass. But they don’t just want to come in. They want to come in and be able to punch people in the face and walk around and laugh about it and then not have anyone to stop them.”

“The enjoyment they get out of being in this ‘town square’ is being able to harass people, being able to attack people…Elon Musk, I guess he misses the old South Africa in the ’80s, I guess he wants that back,” offered Reid.

Reid wasn’t the only one hinting, or outright declaring, that Musk has racist motivations. She was joined by discredited Black Lives Matter activist Shaun King, who said Musk’s actions were “about white power” and that he “was raised in Apartheid by a white nationalist.”

This is false on multiple counts. Musk was born in Pretoria, South Africa, in 1971. His parents divorced when he was a child, and Musk lived with his father Errol, an engineer who amassed a large fortune, for several years. Musk moved to Canada in 1988 when he was 17. He and his father became estranged later on, though Musk said in 2019 that Errol contributed “10% of a ~$200k angel funding round” to Zip2, one of Musk’s early business ventures.*

The oft-repeated claim that Elon Musk is a racist or an Apartheid supporter likely originates from the Errol‘s claim that he owned a Zambian emerald mine in the 1980s. Many people have since used Errol’s claim to argue that the family must have profited from Apartheid, with some detractors alleging that this fortune was then funneled to Elon and used by him at the start of his career.

This is all they have.

And they just pulled that card on Elon Musk, for his daring to buy Twitter and restore free speech.

In one, seemingly innocuous act, Musk has inadvertently neutered the power of our enemies calling anything they like “white supremacy,” and immediately not only delegitimizing it, but cancelling it/them for good.

There’s no going back, now.