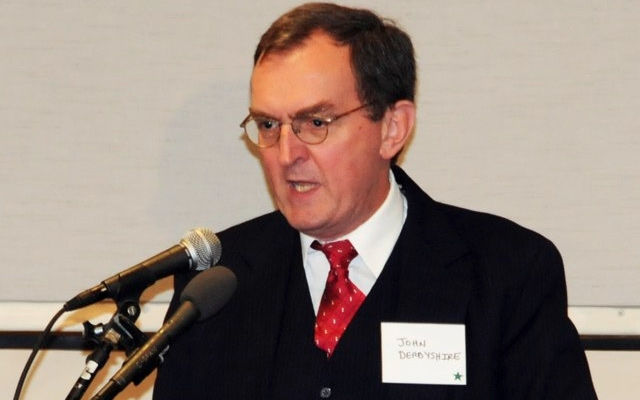 John Derbyshire: An Immigrant Doing Work Americans Are AFRAID To Do

John Derbyshire’s eminently reasonable and realistic article at TakiMag: The Talk: Nonblack version April 05, 2012 has made him the target of the new iteration of the MSM Trayvon Martin lynch mob – shamefully egged on by his more contemptible NR colleagues. In 21st Century America, that is the reward for addressing racial issues accurately.

So far it looks as if holding a remunerative position in “Conservative” journalism mandates denouncing Derbyshire. His defenders muster in the blogosphere. Here I salute those who appear to be currently the most forceful:

As if it’s not bad enough that racial socialism demands the collective glorification of people who have an average IQ of somewhere between 78 and 85, a stratospheric crime quotient, and an even higher hate quotient, it also demands that people with triple-digit IQs talk and write as if they were in the 78-85 range, and that they spread the hate against anyone who dares to state the obvious about race.

John Derbyshire is a national treasure.

Needless to say, no one at National Review shares Derb’s appalling view of what parents supposedly should tell their kids about blacks in this instantly notorious piece here.

That is very interesting…If Lowry had young teenaged children, and the offspring announced to Dad that they were planning to attend an all black entertainment event or go to an amusement park or beach that had a high concentration of young blacks, would Dad, properly rejecting Derbyshire’s “appalling” advice to parents, say, “Sure, kids, go ahead, have fun”?

DERBYSHIRE’S “TALK,” AND THE CONTROVERSY IT HAS TRIGGERED VIEW FROM THE RIGHT APRIL 06, 2012

Personally, I believe that a lot of people in America are experiencing severe levels of "Negro Fatigue" right now. And Disingenuous White Liberals (DWLs) sense this.

The question is simply this: How much longer can America stay competitive when every decade or so a city must be abandoned to the Black Undertow? Detroit is not an anomaly. There are hundreds of once-thriving cities that are now majority Black and completely reliant on federal loans, federal grants, and tax-payer assistance to survive.

Call it the greatest example of tribute in the history of the world. It's akin to the European powers paying off the Barbary Pirates…

This is the essence of BRA; all of America's problems stem from not being able to discuss race in a rational manner.

Those on the so-called respectable "right" (conservatives) and on the "left" are in total agreement about our fealty and subservience - deference perhaps - to Black people. There can be no deviation from this script. As America fails, we have basically enshrined in law that discussing problems arising from the Black community is not be tolerated.

John Derbyshire's sensible column has generated a massive response — most shameful is the reaction for his former colleagues at National Review — that illustrates why have a dialogue on race is impossible in Black-Run America (BRA).

It is a pointless waste of time to get involved with the professional conservative movement that employs nothing but career girls like Ramesh Ponnoru and Jonah Goldberg to write insipid columns about current events. It is “mainstream” precisely because it is neutered, harmless, ineffective, and non-threatening to the culturally dominant Left…

The reaction from this class of people – the professional conservatives, who work for conservative media outlets in Washington and New York – has been noticeably different from the reaction by ordinary conservatives in Dixie and Heartland… who are posting intelligent comments on other websites.

We at VDARE.com strongly endorse the Nicholas Stix view of Derbyshire quoted above. It has been years since he was banned from writing for us – I still think his early essay here Importing Sino-Fascism? seminal.

But whatever his fate, there is a broader issue here. As Peter Brimelow asked discussing an earlier National Review freak-out about a Derbyshire article:

...it is worth considering why an article that might conceivably incline the founding people of this country to consider matters from the angle of their ethnic interest is forbidden at NR. After all, they are the indispensable core constituency underpinning the Republican regime so assiduously courted by the magazine. What is NR afraid of?

Another analysis of this crucial matter is at Derbyshire On The Senile Decay Of National Review.